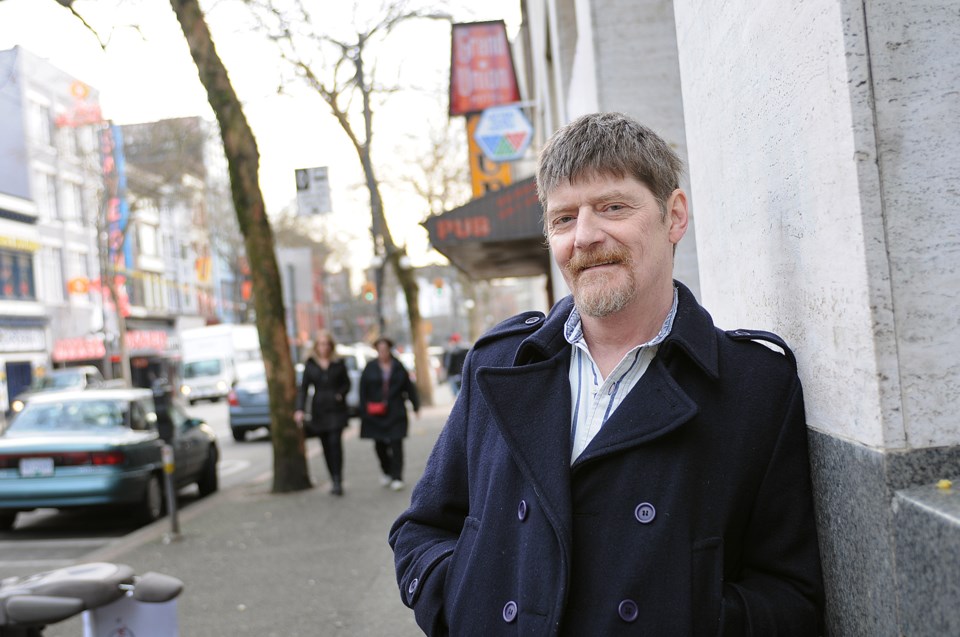 Dean Wilson is having a good laugh as he recalls the time a popular Canadian author assessed the drug activist’s celebrity status way back in the day.

“Michael Ondaatje told me I was Canada’s most famous junkie.”

Famous because of his real-life role in Fix: The Story of an Addicted City, a documentary film by Nettie Wild that captured Wilson’s battles with addiction and his fight with city hall to do something about the mounting drug deaths.

More than a decade later, fewer people are dying of drug overdoses and the number of injection drug users contracting HIV/AIDS has dropped dramatically.

And Wilson, well he’s still on the job, so to speak.

But get this: He says he hasn’t touched cocaine in five years and stopped using heroin more than a year ago. He’s on the methadone program, has put some meat on his bones and volunteers three times per week with the PHS Community Services Society.

“My whole life is straight now — whether I smoke a joint here or there, or drink a couple of shots of scotch one night is irrelevant,” he said from an office at the drug users’ resource centre on Cordova Street, across from Oppenheimer Park. “I don’t even consider myself a drug user at all anymore. Four or five years ago, I was down to 110 pounds and I said this is bullshit. So I said to myself, ‘Let’s get high and die, or let’s figure something out because this isn’t working.’”

What Wilson figured out is that he is 59 years old, has two adult children and an 11-year-old son who want him to be around. He’s also learned having a permanent residence at the Woodward’s building, working with addicts and using his brain to make change is the way to go for him.

A few years ago, Wilson and fellow drug user Shelly Tomic, along with the PHS, fought successfully in the courts to keep the Insite drug injection site open indefinitely. They took their case all the way to the Supreme Court of Canada.

“We did it and I’m really proud of it,” said Wilson, who was among those who made speeches on the opening day of Insite in September 2003.

“That five-year progression of going through the three courts taught me a lot about how to approach a problem from start to finish. The reality of it was that no matter how many protests you do, it’s still changing the law that really counts.”

Wilson spent some time this week with the Courier to talk drug addiction, the Downtown Eastside and what life is like for a recovering addict pushing 60.

You mentioned you went through detox and got on the methadone program. But how have you managed to stay off drugs in a neighbourhood where they are so readily available?

Where does your activism come from?

“You know, it really comes from my mother and her real sense of fair play that was drilled in to me as a kid. That’s, I think, why I got into doing this [activism] because I didn’t think that there was a lot of fairness going on with the people who were addicts.”

Looking back, do you have any regrets about participating in Nettie Wild’s documentary? It didn’t necessarily paint you in a good light.

“It made me — not famous or infamous — but it made me well known about the subject internationally and it gave me clout. It really gelled the harm reduction community across Canada. It was kind of a double-edged sword though. I remember one time I was in Ottawa and just about to go through security and some guy goes, ‘Hey there’s the junkie from the film.’ Next thing I knew I was in a back room being strip searched and I missed my flight. But I did get on the next flight.”

There are those people who say abstinence is the best way to kick a drug addiction. What do you say about that?

“Abstinence is one way of dealing with it. But people who have high cholesterol, there’s more than one cholesterol drug out there because there are different ways of looking at a problem. Yes, abstinence is a goal, but it can’t be the only goal. To go from a street-entrenched drug user to abstinence is a long process.”

One of the biggest critics of harm reduction and Insite has been the Harper government. What do you say to the feds?

“I’m going to be around and harm reduction is going to be around a lot longer than Prime Minister Harper will be prime minister. It was there before he came and it will be there after he leaves. If he wants to be this right-wing Christian guy, that’s fine. But what I would tell him is that Jesus Christ would have supported injection sites had he been alive today.”

The Downtown Eastside is seeing more new businesses and more construction and there are those worried about gentrification. What’s your assessment of the change in the community?

“Gentrification isn’t coming, it’s already here. We want to work with all our neighbours and find positive things that we can work together on — because we can always find something we don’t like about each other.”

So life is good after all these years?

“I can’t say enough about how my life is now. I’m just really, really happy and I’m content. And it’s probably the first time in my life that I can actually say that. I laugh now and tell people I even have a junk drawer at home in my kitchen like normal people.