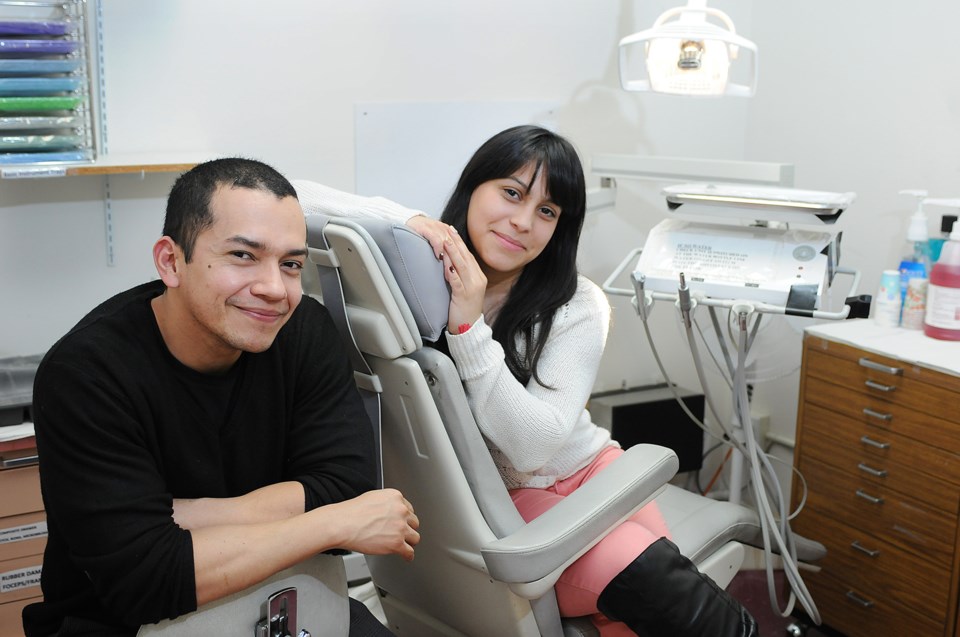 The interior of the East Side Walk-In Dental Clinic looks like any other dental clinic.  There are a long line of chairs in the waiting room, thank-you cards from grateful clients on the wall and a smiling receptionist ready to welcome anxious patients.

But this isn’t your average dental office.

The clinic, part of the non-profit Vancouver Native Health Society, is in the heart of the Downtown Eastside and treats patients who often haven’t seen a dentist in years.

They don’t pay a dime. The clinic is supported primarily by donations from organizations and individuals. To see a dentist, a person needs only to be living in poverty in the Downtown Eastside.

According to receptionist Jenifer Ayala, who’s worked at the clinic for three years, about 45 patients are treated over the two days dentists are available on Mondays and Fridays.

Most patients are men in need of extractions due to infections, she said.

The goal of the staff is to treat patients with the utmost respect and provide them with the same level of care found in any dental office in the city that serves more well-heeled clients.

“Just because we see patients who are homeless doesn’t mean that they should not get good service,” Ayala said.

“The patients who come here always tell us the same story, that they don’t like dentists and they have had bad experiences in the past. They come here and they tell us this is the best experience they have ever had.”

According to Lou Demerais, the society’s executive director, the need in the community has always been greater than the clinic can meet.

The project began eight years ago to complement the medical and addiction services offered at Vancouver Native Health Society. At first it was open only half a day a week.

“We were warned from the beginning, once the word got out that this was all free dentistry that we were going to have some difficulty with crowd control and of course that came to pass,” he said.

The first day it opened a line-up formed down the street with people waiting for an appointment.

Though the clinic now has dentists two days a week and hygienists available four days, waiting times can often be an hour and a half or longer and patients have been turned away.

Finding enough volunteer dentists and a manager who has the skills and dedication to stick around have been ongoing problems.

Ayala said there are a lot of misconceptions about the clinic and the community it serves.

“A lot of people are scared to come to the Downtown Eastside because it has its history and it is not like that here. It is a safe environment here,” she said.

Demerais said the clinic might have finally found the right manager in Lex Vides, 32, who was on his second day at the clinic when the Courier visited Tuesday.

A smiling Vides was excited to get started.

“I like it because it reminds me a lot of my country. In [El Salvador] I was a dentist and I used to do a lot of voluntary work,” he said.

His main goal is to round up more dentists so more patients can be seen. He said dental health is more important than people realize.

“Everything goes into your body through your mouth,” he said.

For more information on the clinic go to vnhs.net.

**Please note this story has been modified since its original posting.