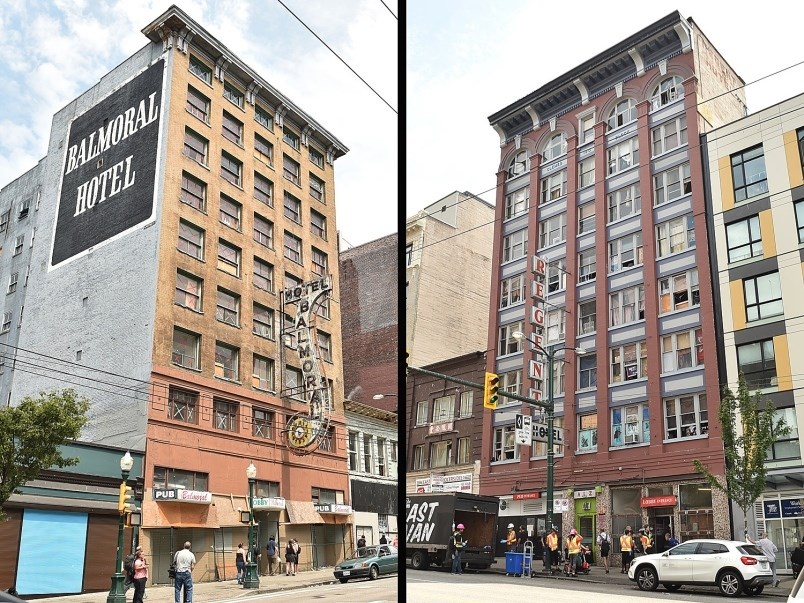 Owners of two derelict hotels in the Downtown Eastside — the Regent and the Balmoral — are fighting Vancouver city council’s decision last month to expropriate both buildings for $1 each.

Lawyer Evan Cooke, acting on behalf of the Sahota family, said he and his co-counsel Nathalie Baker filed a petition for judicial review Wednesday in B.C. Supreme Court.

“The owners are not denying that the buildings had historical maintenance issues, but say instead that those issues are not really relevant to the current step that the City [of Vancouver] has taken to expropriate,” Cooke told the Courier by telephone Thursday.

“What the owners are challenging is the City of Vancouver’s legal authority to expropriate in this circumstance. And they’re also challenging the process that was employed by the city in proceeding with those expropriations, and approving them.”

The 45-page petition, along with more than 900 pages of documents, was not available at the court’s registry when the Courier checked Thursday morning.

Cooke said he was given instructions by his clients not to share the documents with the media. He said the city was to be served with the full package of documents Thursday.

The city’s communications department said in an email Thursday that it was aware of the court action taken by the Sahotas, and that its lawyers will file a response to the petition “in due course.”

The Sahotas’ court action comes after city council took the rare step Nov. 6 to expropriate the Balmoral and Regent, which have been known for decades as hotels with deplorable living conditions and magnets for crime.

The unanimous vote was to trigger the city to pay a nominal fee of $1 each for the single-room-occupancy hotels, which are located across from each other on East Hastings near Main Street. The city was also to pay $1,000 to the holder of the Regent Pub lease.

On the day of council’s decision, Cooke requested council abandon city staff’s recommendation to expropriate the hotels. Cooke said the Sahotas had received multiple private offers ranging from $7 million to $12.5 million for each building.

At the time, the city cited engineering reports detailing fire hazards, rotting wood, sagging floors, water damage and mould inside the Balmoral. Similar problems were raised by the city in its decision to close the Regent.

COPE Coun. Jean Swanson called on the city for years to force the Sahotas to improve conditions in their hotels. Swanson has continued with her fight since being elected to council in October 2018.

Reached Thursday, Swanson said she expected the Sahotas to appeal and believes it will now delay renovations to the hotels. She has often pointed out that losing 300 hotel rooms is a big loss at a time when the city’s homeless population is at an all-time high (2,223 people counted in March).

“I think it just postpones everything,” Swanson said. “I’m sure they’re going to try and get more than $1 per building. Hopefully, this [court] part of it can be over in a year or less, and we can move on.”

Two of the Sahota family members — Pal and Gudy — were registered to speak at the Nov. 6 council meeting, but failed to show when their names were called.