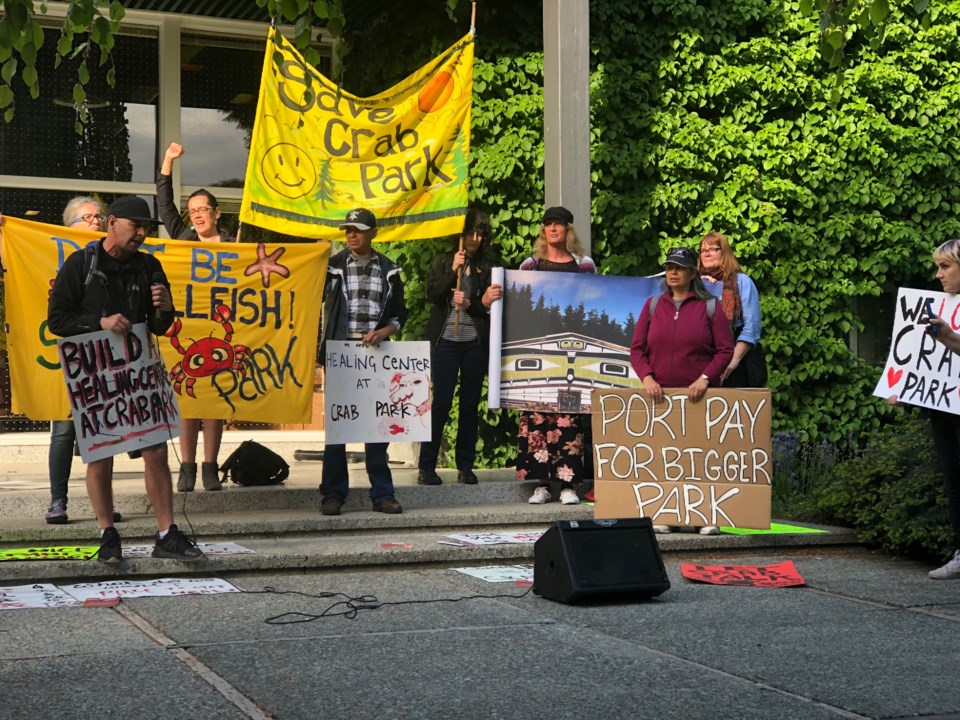 A group of residents and supporters from the Downtown Eastside rallied outside the Vancouver Park Board office May 13, calling for improvements to CRAB Park. Photo Jessica Kerr

A large group of residents made the trek from Vancouver’s Downtown Eastside to the park board office in Stanley Park Monday night to speak to the significance of CRAB Park to the community and the need for an Indigenous healing centre.

Park board commissioners unanimously approved a motion from COPE’s John Irwin that will ask Vancouver Fraser Port Authority to invest in the park in light of the impending expansion of neighbouring Centerm container terminal, including expanding the park, establishing a healing centre and improving access, especially for people with mobility issues.

Irwin’s motion, which was deferred from the May 13 meeting to allow residents to speak to it, asks the port authority to work with the City of Vancouver, park board and First Nations, on a plan for the central waterfront area, including CRAB Park, that would give equitable access to “expanded, high-quality greenspace,” explore the feasibility of an Indigenous healing/cultural centre, create and enhance significant shoreline habitat, and put a city-wide focus on expanding waterfront park access.

The park is located at the foot of Main Street. It is one of a few parks in the Downtown Eastside and the only one with waterfront access.

“I just really would like to speak to the importance of this entire thing actually happening, in terms of preserving community autonomy for folks in the DTES, giving them somewhere to go that’s not the utmost chaos we see living in that neighbourhood in general,” said Eris Nyx, who has lived and worked in the Downtown Eastside for 10 years.

“I want to stress how important it is… this particular park is so radically different from the alleyways and the congestion and the wildness of the Downtown Eastside itself,” Nyx said. “It’s a huge compliment to that community and is very integral to a lot of people’s mental health to be able to step out and still be in their neighbourhood and still be in their community, it hasn’t gentrified to the point that the folks in the DTES don’t actually feel unwelcome there, which I think is really important.”

Don Larson of the CRAB Water for Life Society helped establish the park in the early 1980s.

“[We] began working for a park 36 years ago, a small group of DTES people… and here we are a lot longer later and it’s time for the park board to really stand up with us in improving Crab Park. The park is under industrial pressure from the port and just throwing us some money isn’t really respectful or the answer. We need land…,” he said. “It’s really time to honour Crab Park, and it has to start here at the park board. I don’t expect it to start at the Port of Vancouver.”

Many speakers stressed the importance of establishing a peer-led healing centre in the park.

“This healing centre is essential for our people,” said Gunargie O’Sullivan. “I hear the word reconciliation being thrown around like the words love and hate. I don’t believe you understand what reconciliation entails or who it’s addressing,” she said, speaking about the intergenerational trauma of Canada’s residential school system and the effects of colonization.

“We lost our language, our culture and our families and our community. Those are just words to you but think about it,” O’Sullivan said. “Losing a family. Not just one family at a time but all of them at once… We have nowhere to go to find each other, to find healthy ways of living, to heal and to be one with each other. That is why we need this healing centre, so we can find ourselves, find our family.”

The park is also already home to a memorial to some of the Downtown Eastside’s missing and murdered women.

The idea of an Indigenous healing centre in the city is not new. Longtime activist Wendy Pedersen, who was involved in the Downtown Eastside local area plan, which was approved by city council in 2014, told commissioners it has been talked about in the community for decades and is included in the plan.

“I urge you to put a facility down in the park,” Pedersen said. “It will help anchor Downtown Eastside residents’ urban Aboriginal presence down in that park, which is really needed.”

“I have heard from many of my constituents about the importance of adding community amenities, including facilities that can accommodate programming for and by vulnerable populations in the Downtown Eastside,” Mark wrote. “We know that these spaces of belonging have a significantly positive impact on people’s lives. This motion is a great opportunity to increase equitable access to a vitally important and well-used waterfront greenspace.”

The Centerm expansion project, which was approved last spring, will expand the terminal’s footprint by 15 per cent and increase the number of containers it can handle by two-thirds. The project includes a westward expansion of the terminal area and a reconfiguration of the terminal, as well as off-terminal road and rail improvements.

“As part of the Centerm Expansion Project, we have committed to giving back to the community and are currently working through final details of that community contribution, which we anticipate to include a contribution toward improvement at CRAB Park,” reads a statement from the port authority. “We anticipate being able to share more information and details on the contribution this summer.”

The motion passed Monday night, included establishing a working group partnership with the City of Vancouver and the community with the goal making the healing centre a reality.

“We look forward to working with the Vancouver Park Board on the specifics of that arrangement and to see how we can integrate our shared values and goals around community and environmental health, as well as meaningful inclusion of Indigenous rights holders,” the port authority said.