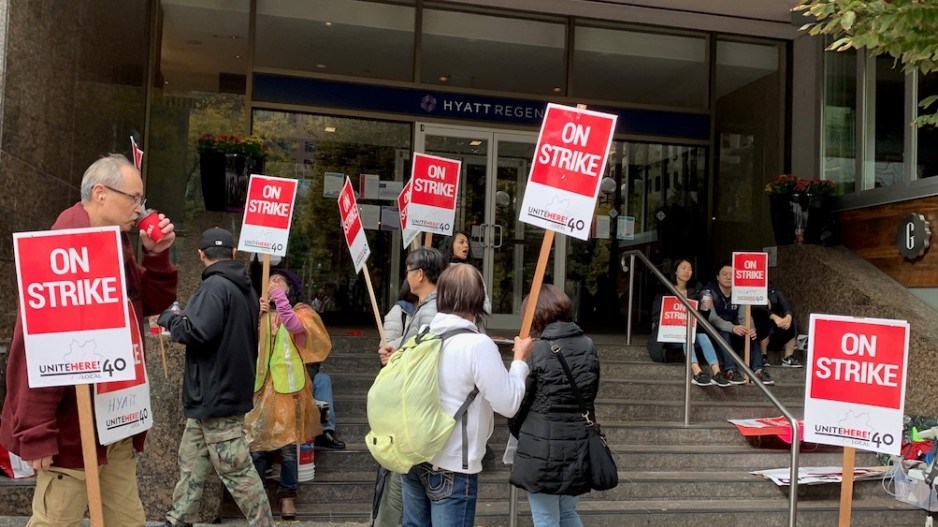 Striking workers block an entrance to the Hyatt Regency on Oct. 3. Glen Korstrom

Striking workers at the Hyatt Regency, Westin Bayshore and Pinnacle Hotel Harbourfront hotels were dealt a blow Oct. 3 when B.C. Supreme Court Justice Shelley Fitzpatrick ruled that they are no longer able to impede visitors or make a lot of noise outside the hotel.

This is in response to a lawsuit from those hotels that attempted to rein in disruptive noise.

Fitzpatrick’s order specifically says that the workers are instructed not to be block, impede, hinder, delay, obstruct, slow the movement of people or vehicles at or near the hotel entrances, exits, driveways or public roadways.

She also forbid workers from “using air horns, blow horns, [or] whistles at or near the hotel premises.”

She then elaborated to also forbid “drums, microphones, speakers, megaphones or any other electronic device to amplify sound, or to play pre-recorded sounds or pre-recorded music over 75 decibels on an approved sound meter as defined by the City of Vancouver Bylaw No. 6555, emanating at least 6.1 meters from the source of the noise or sound.”

The Hyatt’s vice-president of labor relations for the Americas, Michael D’Angelo, told Business in Vancouver in a statement that he considers the court order to be a “significant step in the right direction.”

That is in part because it covers the Hyatt and the other two Greater Vancouver Hotel Employers’ Association hotels that have striking workers: they Pinnacle Hotel Harbourside and the Westin Bayshore.

“The application submitted by Hyatt to the Supreme Court of British Columbia was based on violations of the public health and safety laws pertaining to noise levels and traffic disruption while picketing,” he said.

“Our colleagues are the heart of our business, and we respect the rights of our colleagues to voice their opinions in a way that is less disruptive to our guests and visitors.”

He said he hopes that the union, Unite Here Local 40, will soon return to the negotiation table so that an agreement can be struck.

Workers have been on strike at the three hotels since Sept. 19.

No one from the union immediately responded to a request for a comment.