By Julia Kalinina Akua Schatz and Brendon Purdy found a Dunbar home they can really call their own. They built most of it themselves. Their bright, urban cottage with a polished wooden frame and high ceilings stands next to Purdys parents house.
Oct 16, 2012 9:00 PM By: Vancouver Courier Staff 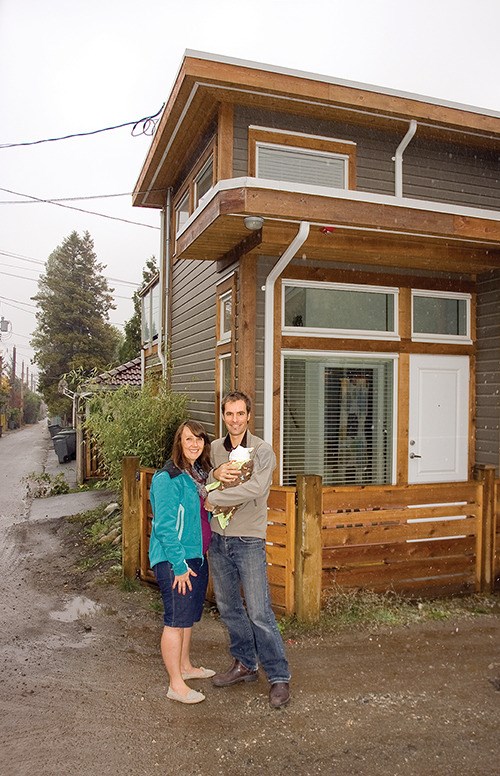 Akua Schatz and Brendon Purdy found a Dunbar home they can really call their own. They built most of it themselves.

Their bright, urban cottage with a polished wooden frame and high ceilings stands next to Purdys parents house. In fact, its in their backyard. It has a loft on top of the main floor, wide windows, a one-car garage, and 500 square feet of living space.

Its a small space but, for us, thats a benefit, says Schatz. We think more about what we bring in, we spend more time outside.

Building a laneway house offered the young couple the opportunity to live in the city. The whole structure cost $280,000 to build. They tend a garden and visit their parents by walking across a short pathway from their kitchen door. They bike to work.

Schatz and her partner Purdy moved to Vancouver a few years ago and were looking for a place of their own. They wanted to avoid a long commute to work but real estate prices in Vancouver prevented the young couple from considering property in the city. Thus, the idea of a laneway house on their parents lot sparked their imagination.

Schatz and Purdy chose a local company called Smallworks, specializing in laneway houses, to help them design and build their home. Company founder, Jake Fry, drew inspiration from his travels outside of North America, where he says he was charmed by small houses and creative uses of space.

Ive always contended that when you have something small, your standard of living goes up, says Fry. If you have something that meets your needs but doesnt consume all of your resources, its a way to step back and enjoy things more.

In 2009, as a response to exorbitant housing prices and pressure to densify residential areas, Vancouver city council approved a bylaw that rezoned 94 per cent of the city and allowed for the construction of laneway houses. Over 500 laneway homes have been built in Vancouver in total, according to a city hall report.

Fry says laneway houses will allow more young people to move back into the city. And thats positive for the neighbourhoods because thats what keeps a city strong.

Despite the benefits, laneway housing has faced some resistance from Vancouver homeowners.

Some people think that its changing the face of the neighbourhood and they want to keep things the same, says Schatz, who is on the Dunbar Residents Association. Others have articulated the concern that residents cannot control the pace of change in their neighbourhoods.

Schatz and Purdy welcomed a baby boy into their lives three weeks ago, born in the house that the young couple designed themselves.

We got to put our stamp on it and we designed it well, says Schatz. And we have our parents with us. They help us and we help them.

She maintains a blog, BuildSmall.Blogspot.ca, about her experience with laneway housing.