NASA satellite images show how the fires raging across B.C. are affecting air quality in other provinces
Aug 21, 2018 9:43 AM By: Sandra Thomas 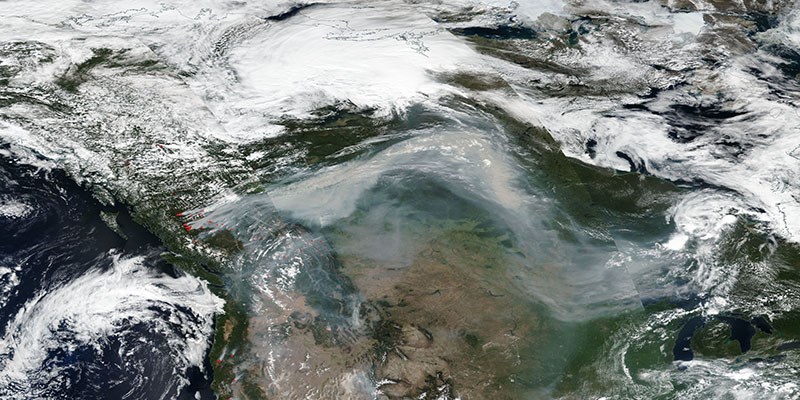 This image shows smoke from fires in B.C. blowing across Canada. This image was acquired Aug. 10 2018, by the Visible Infrared Imaging Radiometer Suite instrument, on board the joint NASA/NOAA Suomi-National Polar orbiting Partnership satellite.

While we don’t need NASA to tell us how bad the smoke is across B.C., these images taken from space demonstrate just how far it’s travelled.

Not only is the smoke affecting air quality in this province, it’s also covering parts of Washington State and Oregon and is spreading across Canada. Air quality alerts remain in place for Vancouver and much of the province. Heat-related illnesses are more likely to occur during prolonged periods of hot weather putting everyone is at risk.

Those most vulnerable to high temperatures include infants and toddlers, pregnant women, seniors, those working or exercising in the heat, persons with chronic illnesses, people living alone without air conditioning, and the homeless.

Environment Canada meteorologist Matt MacDonald told the Courier Aug. 15, that a substantive spell of wet and windy weather is needed to even make a dent in the horrific air quality plaguing huge swaths of land from California to Alaska. Working off weather predicting models that forecast in two-week intervals, MacDonald sees no reprieve before the end of August.

“There is no considerable precipitation on the radar for as long as the eye can see,” he said.

As of today, Aug. 21, Vancouver had been under an air quality advisory for more than a week with more advisories expected.