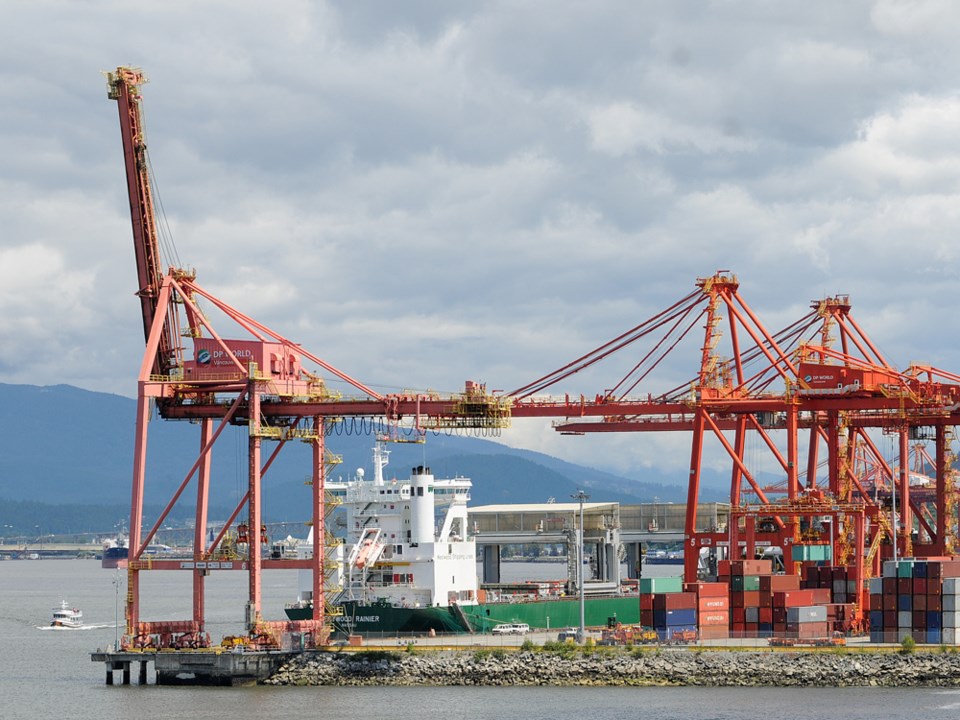 Vancouver Fraser Port Authority recently issued a permit for the Centerm expansion project that will increase the terminal’s footprint by 15 per cent and its container handling capacity by two-thirds. Photo Dan Toulgoet

A group of East Van residents is lobbying the province to assess the potential environmental impacts of the port’s plan to expand the Centerm container terminal.

Following a lengthy review, Vancouver Fraser Port Authority recently issued a permit for the $320-million project that will expand the terminal’s footprint by 15 per cent and increase the number of containers it can handle by two-thirds. The project includes a westward expansion of the terminal area and a reconfiguration of the terminal, as well as off-terminal road and rail improvements.

Centerm, which is operated by DP World, handles approximately one-fifth of goods shipped in containers through the Port of Vancouver.

“The West Coast of Canada is running out of container handling space,” Cliff Stewart, vice president of infrastructure at the port authority, told the Courier. “As Canadians we’re buying more from Asia and Asia’s buying more resources, and the Centerm expansion project, the purpose of it is to intensify the use of an existing terminal.”

The port’s permitting process included a preliminary comment period in 2016 and two rounds of public consultation in 2017, an environmental assessment that looked at the current impact the terminal has on the air quality in the surrounding area, as well as the projected impact of the proposed expansion, traffic and marine studies.

The Strathcona Residents’ Association, along with the Grandview/Woodland area council and Burrardview Community Association, is calling on the province and Environment Minister George Heyman to have the project reviewed by the provincial Environmental Assessment Office.

Smith said the provincial review process takes more factors into consideration — the environment, social and economic conditions, health, and heritage — and there are other cases where the province has worked in cooperation with federal jurisdictions on environmental assessments.

“The port’s process is incomplete. It doesn’t address these areas of provincial jurisdiction and we’re looking for the minister, who is currently involved in a public process of trying to restore trust in the provincial environmental assessment process… We’re providing him with information as to why he should be undertaking the provincial environmental assessment and asking him to follow through on that,” Smith said.

“It’s important to understand that this is both a permit from the port but also an environmental assessment and so there are still other permits that are required,” Stewart said, adding that the port is currently in the process for obtaining the required permits from Environment and Climate Change Canada as well as Fisheries and Oceans Canada, as well as finalizing commercial arrangements and land tenures. “This is a really important step but it’s not the final step in the process.”

Smith said the group’s main concerns are around air quality and the impact of increased truck, rail and container ship traffic on the community. As well as the cumulative effects of all the industrial activity taking place in the neighbourhood, which is growing — there are thousands of new residential units slated to go in along Hastings Street between Campbell and Clark, Smith added.

Stewart maintains that while there will be a temporary increase in traffic during construction, once complete the planned road improvements will eliminate the “need for port-related traffic to be in the community at all. It will be kept exclusively on the port road,” he said.

“With respect to traffic, the project actually should significantly mitigate traffic in the local community both truck traffic and also commuter traffic related to port operations.”

He added that the port’s truck licencing system will have a positive impact on air emissions.

“By the time this project opens we will have implemented a 10 year truck age limit. And what that means is the most recent improvement in truck engine emission requirements in North America came into effect in 2010 and so by 2020 all trucks that are working for the port and in the port will be required to be 2010 or newer.”

Don Larson of the CRAB Water for Life Society, which oversees CRAB Park, is concerned about what construction and dredging will do to water quality surrounding the terminal and the park.

Stewart said that part of the permit from Environment and Climate Change Canada will include having a plan in place for removing and properly handling any contaminated materials before dredging begins.

The province is currently assessing the port authority’s decision.

In an email to the Courier, B.C. Ministry of Environment staff said that now that the port authority has rendered its decision the province’s Environmental Assessment Office will review the decision materials “to determine if there are any significant adverse effects anticipated from the project, and if there are any outstanding issues of provincial interest.”

The review will determine if the project requires a provincial environmental assessment certificate.

Smith said that while the province has asked for the residents’ association’s feedback as part of the review, the group is not holding out hope for seeing a full environmental assessment.

“We really feel that we’re being abandoned here. We feel that the way that the province is moving right now is definitely in the direction of exempting this project from an environmental assessment and we feel that that’s [Environment Minister George Heyman] essentially abdicating his responsibilities.”