The political landscape of Vancouver – and indeed Canada – is changing. Thirty new electoral districts have been created since 2011, including the new riding of Vancouver Granville. The latest Nanos national poll, released Oct.
Oct 15, 2015 3:50 PM By: Glacier Media Staff 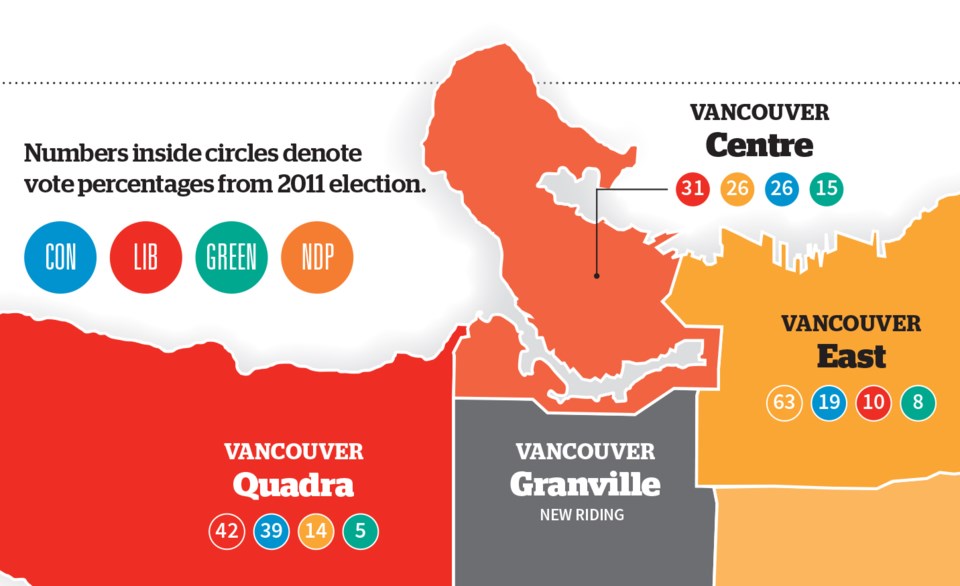 The political landscape of Vancouver – and indeed Canada – is changing. Thirty new electoral districts have been created since 2011, including the new riding of Vancouver Granville. The latest Nanos national poll, released Oct. 10, shows a three-way race between the Liberals (35.1 per cent), Conservatives (29.0 per cent), and NDP (25.0 per cent). The Oct. 19 federal election is truly any party’s to win, and the six Vancouver ridings could help tip the balance of power on Monday in this tightly contested election campaign. Here now is a look at the candidates from the four major parties running in the four ridings in and around downtown Vancouver.

The downtown core’s riding has shrunk since the last election after losing its southern tail to the newly minted Vancouver-Granville riding. A Liberal stronghold for the past 22 years ever since a first-time candidate put an end to the brief reign of Prime Minister Kim Campbell.

Incumbent Hedy Fry first won the riding in 1993 and is now the longest-serving Liberal MP in BC history. Born into poverty in the Caribbean nation of Trinidad and Tobago, Fry became a family physician who worked at the West End’s St. Paul’s Hospital for 20 years after immigrating to Canada. She is currently the party’s health critic. Fry served as Secretary of State for Multiculturalism and Status of Women from 1996 to 2002, when she was shuffled out of Cabinet not long after making infamous claims in Parliament about crosses burning on lawns in Prince George. She ran unsuccessfully for the leadership of the Liberal Party in 2006 and has also served as president of the Vancouver and British Columbia Medical Associations.

Elaine Allan has an extensive background in the non-profit sector and has served as executive director of Shelter Net BC and director of the John Howard Society of the Lower Mainland. Due to her role as a former manager of the Downtown Eastside’s WISH Drop-in Centre, she became a key witness at the murder trial of Robert “Willie” Pickton and testified that police lied to her when she attempted to file a Missing Person’s Report regarding one of his victims. Journalist Stevie Cameron dedicated her book On the Farm about the botched investigation in her honour.

A former mayor of Bowen Island, Air Canada flight attendant, Yaletown art gallery owner and COPE’s top vote earner running for city council in the 2014 municipal election, Lisa Barrett now practices mediation and is a member of the British Columbia Arbitration and Mediation Institute. She also serves as a director with Pacific Policies and works with Rising Tide, a grassroots organization dedicated to fighting climate change, as well as the Canadian Community Economic Development Network. Barrett holds a law degree from Cambridge University and also serves on the fundraising board for Lawyers’ Rights Watch Canada.

A former two-term Vision Vancouver park board commissioner and current senior executive at the Dr. Sun Yat-Sen Classical Chinese Garden, Constance Barnes is the daughter of the late MLA Emery Barnes and was instrumental in the creation of a new Yaletown park named in his honour. Barnes is an outspoken opponent of keeping cetaceans inside the Vancouver Aquarium. She is a member of the Coalition of Child Care Advocates of BC and is a former trustee of the Vancouver Public Library Board. A recovering alcoholic who was charged with DUI after crashing her car into a house in 2009, she currently sits on the board of directors of the Avalon Recovery Society.

The riding, which includes the Downtown Eastside, Chinatown, Strathcona and Grandview-Woodland neighbourhoods, is known for its working class roots. Voters have, apart from two brief flirtations with the Liberal party, elected NDP candidates every election since the party was founded back in 1961. Deputy NDP leader Libby Davies, who has held the seat since 1997, has chosen to retire at age 60 rather than run for a seventh term.

After nearly 20 years as the NDP MLA for Vancouver-Mount Pleasant, Jenny Kwan is hoping to make the jump to federal politics. Kwan moved to Canada from Hong Kong as a child and, at age 26, became the youngest person in Vancouver history to be elected to city council. In 1996, she became one of the first Chinese-Canadians to sit in the provincial legislature and went on to serve as Minister of Municipal Affairs, Minister of Women’s Equality and Minister of Community Development, Cooperatives and Volunteers. Kwan has also drawn controversy for playing a key role in the ousting of Carole James as NDP party leader in 2010 and for an expense scandal last year over her ex-husband Dan Small having billed the non-profit Portland Hotel Society for a family trip to Disneyland.

James Low has a low profile. The ruling party’s website doesn’t offer any biographical information about the bald, bespectacled man of Asian heritage seen in campaign posters, and Low has no discernible online presence. He also chose not to appear at a recent all-candidates meeting.

A long-time East Side resident, the Inuvik-born Wes Regan is an urban geographer and former executive director of the Hastings Crossing Business Improvement Association. He also teaches at Simon Fraser University’s Centre for Sustainable Community Development and is a co-founder of Groundswell, a grassroots “alternative to business” school.

Erinn Broshko is a corporate lawyer and former CEO of a biotechnology company who now works as managing director of an international investment firm. He serves as a director of the non-profit Down Syndrome Research Foundation.

A certified general accountant, Michael Barkusky is the president of the Pacific Institute for Ecological Economics and one of the founders of the Adam Va-Adamah Jewish Environmental Society. He has served on the boards of the BC Mountaineering Club, the False Creek Watershed Society, the BC Chapter of the Canadian Parks and Wilderness Society, and the Canadian Society for Ecological Economics.

Jody Wilson-Raybould is a lawyer, member of the We Wai Kai Nation and Regional Chief of the BC Assembly of First Nations. She began her legal career as a crown prosecutor in Vancouver and later served as an advisor at the BC Treaty Commission. Wilson-Raybould carries the Kwak’wala name Puglaas, which means “woman born to noble people.”

Mira Oreck is the director of public engagement for the Broadbent Institute, a left wing think tank, and a veteran Vision Vancouver campaign strategist. Oreck has also worked as a developer of media campaigns and helped produce two popular ads featuring Sarah Silverman and Samuel L. Jackson endorsing US President Barack Obama as part of his 2012 re-election bid (Silverman endorsed Oreck via Twitter). Oreck serves on the City of Vancouver Renters Advisory Committee and as a member of the PuSh International Performing Arts festival fundraising committee.

This West Side riding is the sixth wealthiest riding in Canada and its most highly educated, with more than half of voters holding some sort of university degree or certificate. Vancouver-Quadra, which has lost some of its former territory east of Arbutus Street, has consistently voted Liberal since electing former Prime Minister John Turner in 1984.

A former provincial environment and government services minister, incumbent Joyce Murray was elected an MP in 2008 after first running in 2006. Murray came in second place behind Justin Trudeau to be the new party leader in 2013 and is currently the party’s critic for both national defence and Western diversification and chair of its Northern and Western Caucus.

Blair Lockhart is a lawyer specializing in securities, corporate and mining law. She was the founding faculty lead of BCIT’s Centre for Mine Economics and Business and has taught environmental law at Capilano University and UBC.

Kris Constable is an IT security specialist and advisor for a consulting firm specializing in the areas of privacy law who has worked with the Canadian Internet Policy and Public Interest Clinic as well as to the Office of the Information and Privacy Commissioner of British Columbia. He also blogs for the Huffington Post, helped organize three IdeaWave conferences on Vancouver Island and is a former president of the Canadian Pacific Lawn Bowling Club and director of the Together Against Poverty Society.

Scott Andrews is a regional manager for Pivot Point Family Growth Centre, which helps support adults with disabilities, and is a co-founder of Youth in Development, a Vancouver-based organization that offers Canadian university students hands-on experience with international development work in Uganda.