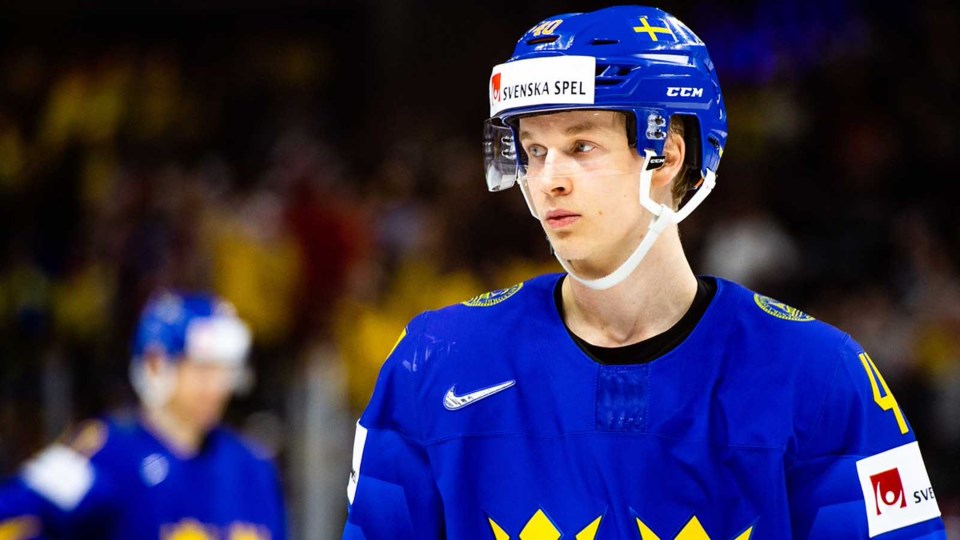 Elias Pettersson has some clever tricks up his sleeve. Sure, he can rip the puck and is a great passer, but Pettersson goes a little further, incorporating all sorts of unique and nasty moves to control the puck in traffic, beat defenders, or just show off.

There were his ankle-breaking dekes from his rookie season or his ludicrous back heel against Czechia in Sweden’s opening game of the 2019 World Championship or the insane stick flip trick he pulled off at a Canucks skate. On Friday, he added a soccer move to his repertoire, heading an airborne puck into the net at practice for Team Sweden.

Facing his Canucks teammate Jacob Markstrom in a drill, Elias Pettersson was stopped on his initial shot from the slot, then retrieved another puck and cut to the net before missing high. He cried in dismay before realizing the puck had banked off the glass behind the net and was available for an unusual finish.

Pettersson gets some pretty good elevation to head that puck into the net, showing some impressive body control, and I appreciate his little fist pump after his success. I’m not sure Loui Eriksson, standing off to the side, really shows the proper appreciation for Pettersson’s feat, but he’s a pretty understated guy at the best of times.

The header brought to mind when Daniel Sedin used his head to flick on a puck for his brother, Henrik. Regrettably, Henrik misread the play and, for some reason, didn’t expect Daniel to head the puck down the wing for him. Come on, Henrik, get your head in the game.

Regrettably, if Pettersson were to use that particular trick in a game, the goal wouldn’t count. That’s what the Chicago Blackhawks’ Andrew Shaw discovered during the 2015 Stanley Cup Playoffs.

It was Game 2 of the Western Conference Final, with the Blackhawks facing the Anaheim Ducks. It was a hard-fought game that went into overtime with the score locked at 2-2. In double overtime, Patrick Kane tried a shot from the side of the net that was saved by Frederik Andersen and popped up into the air in front, where Shaw was battling with Francois Beauchemin.

Shaw showed remarkable presence of mind and jumped up to nod the puck into the net for what seemed to be the overtime game-winning goal.

The Blackhawks celebrated vociferously, though a few seemed hesitant to celebrate too hard, as the Ducks protested to the refs. After a review, the referees all agreed that Shaw’s play was super cool (I assume), but had to rule that it was no goal.

There's a nearly identical rule in international hockey: rule 97(i).

i. No goal will be allowed if an attacking skater kicks, throws, gloves, or otherwise directs the puck into the goal net with any part of his body or by any means other than his stick even if the puck is further deflected by a player or on-ice official after initial contact.

If a puck deflects in accidentally off a player’s body, that’s fine. The problem is when it’s done deliberately. There’s no specific “distinct heading motion” in the rulebook like there is for kicking the puck into the net, but it’s pretty hard to hide intent when it comes to using your head that way.

It’s pretty understandable why you probably don’t want players trying to hit the puck with their heads around the net. That seems like a quick path to a concussion if something goes wrong.

So, for now, it’s just a neat thing to join the pantheon of other neat things Pettersson has done. Neat.