One of the most impressive elements of Elias Pettersson’s fantastic rookie season was that it wasn’t one-dimensional.
Oct 21, 2019 2:55 PM By: Daniel Wagner 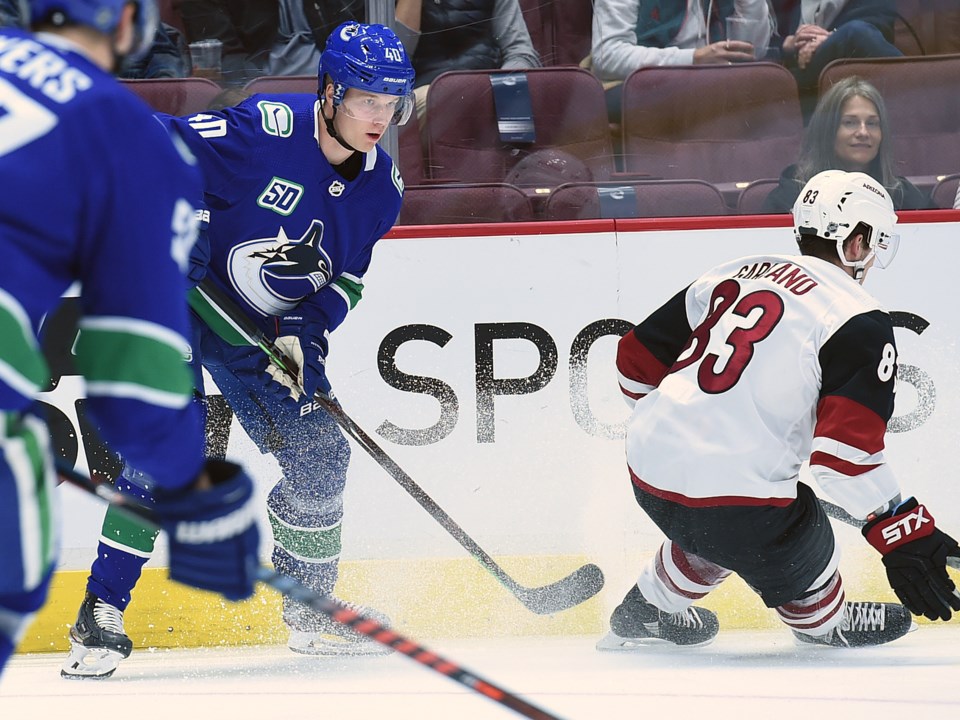 One of the most impressive elements of Elias Pettersson’s fantastic rookie season was that it wasn’t one-dimensional. He did more than just break Canucks rookie records for scoring; he also showed an aptitude for defending that eludes most 20-year-old rookies.

That’s what makes it surprising that in his sophomore season, he’s being sheltered defensively to a very unusual degree. Not a single one of his 141 shifts at 5-on-5 has started in the defensive zone.

To emphasize just how unusual this type of usage is, Pettersson is the only player in the entire NHL that has played more than five games and not started a single shift in the defensive zone. It’s also unique on his own team. His most consistent linemate, Brock Boeser, has also been sheltered, but even he has started four shifts in the defensive zone at 5-on-5.

For instance, Pettersson was on the ice for four defensive zone faceoffs in their game against the St. Louis Blues — three after an icing and one after a puck went out of play seconds into a shift. J.T. Miller took two of those faceoffs and Brandon Sutter took the other two.

(This is a side note, but Sutter is struggling in the faceoff circle to start the season. He’s won 40.5% of his faceoffs, fifth on the Canucks. Pettersson is at 47.5%.)

This usage seems to be primarily a result of roster construction. Two of the Canucks’ four centres are defensive specialists, while the third is a two-way beast that led the NHL in faceoffs last season. The question is whether this is the best use of the Canucks’ personnel, in particular the prodigious talents of Pettersson.

For instance, in the game against the New York Rangers on Sunday, the Canucks clung desperately to a one-goal lead in the third period. For the final nine minutes of the game, neither Pettersson nor Boeser had a single shift. Most of the third period was played in the Canucks’ defensive zone, as the Rangers poured on the pressure, looking for a tying goal.

At one point, with six minutes left, the fourth line of Tim Schaller, Jay Beagle, and Tyler Motte came on the ice and ended up staying out for a two-and-a-half minute long shift. They started the shift in the offensive zone, but the Rangers quickly moved the puck up ice and hemmed the fourth line in for the rest of the shift.

The fourth line had opportunities to clear the puck, but couldn’t. The one time they got the puck out of the defensive zone, they iced the puck and had to stay on the ice.

It ultimately worked out, but not before the Canucks gave up a couple great scoring chances and Schaller, Beagle, and Motte had to block four shots. The issue isn’t just that one shift, of course, but the fact that the Canucks were stuck in the defensive zone for almost the entire period.

That’s where one specific skill of Pettersson’s could have come in handy: his ability to exit the defensive zone with possession of the puck.

We can see that on the ice, but we can also see it in the numbers. Corey Sznajder tracks NHL micro-stats, including zone exits. In this data visualization by CJ Turturo using Sznajder’s data, we can compare how Pettersson’s zone exits stack up against Horvat, Sutter, and Beagle.

Pettersson also leads the other four in possession exit percentage: 71% of his attempted zone exits are successful, compared to 61% for Sutter, 57% for Horvat, and 44% for Beagle.

In other words, if you want someone to reliably get the puck out of the defensive zone, Pettersson is your guy.

We can also look at Pettersson’s linemates, J.T. Miller and Brock Boeser. Miller has a similar profile to Pettersson, while Boeser is merely above average in the frequency of zone exits with possession, but is more successful than Pettersson or Miller when he does attempt to exit the zone.

While Boeser, Pettersson, and Miller are a line designed to produce offence, they can provide additional value by moving the puck up ice in transition, which can lead to scoring chances off the rush.

Throughout his rookie season, Pettersson gave the Canucks little reason to shelter him. It’s exceedingly odd that they’re sheltering him now.