There are no reasonable expectations for Elias Pettersson anymore
Mar 8, 2018 4:18 PM By: Daniel Wagner 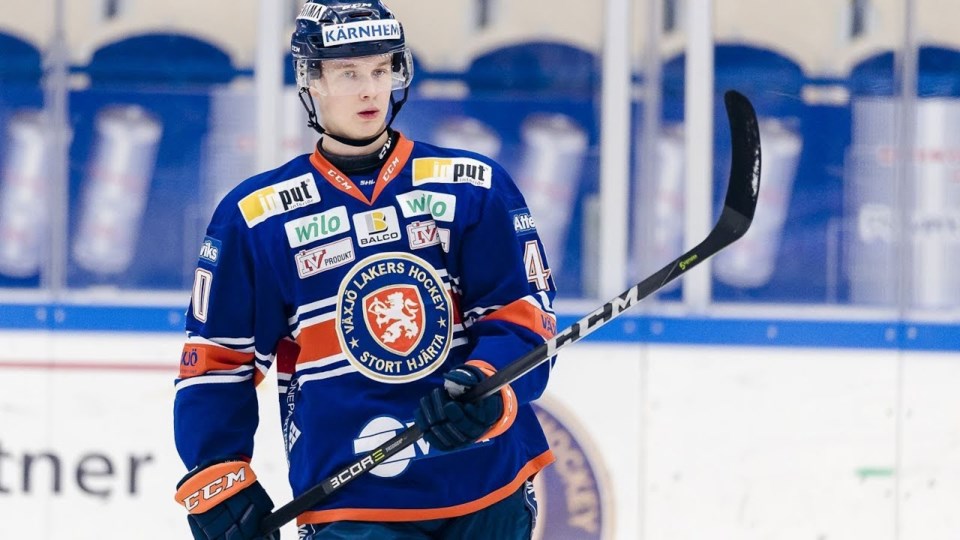 Canucks fans needed a pick-me-up after the injury to Brock Boeser and the team’s lackluster performance against the Arizona Coyotes. Elias Petterson delivered.

Pettersson needed four points to pass Kent Nilsson for the most points by a junior (under-20) player in Swedish Hockey League history. He had two games left in the Växjö Lakers season to do it. He needed just one.

With the score tied 1-1 early in the first period, Pettersson scored his first goal of the game with an incredible solo effort. He toe-dragged around one man, then calmly collected the puck after his first shot was blocked and roofed it over goaltender Oscar Alsenfelt.

Pettersson tallied two quick assists in the second period to tie Nilsson’s record of 54 points and give the Lakers a 4-2 lead, but he wasn’t done.

Anticipating the play, Pettersson took off from below the faceoff dots in his own zone and picked off a poor pass at the blue line. Defenceman Anton Mylläri had no hope of catching Pettersson, who was already near top speed when he took the puck.

Pettersson busted in on the breakaway and snapped the puck past Jonas Gunnarsson, who had entered the game in relief of Alsenfelt a minute earlier. It was the first shot Gunnarsson faced, which somehow seems unfair.

Pettersson now has 23 goals and 55 points in 43 games. The next best junior, 19-year-old Buffalo Sabres prospect Marcus Davidsson has 20 points.

I tried to temper expectations early in the season when he got off to what appeared to be a hot start with 7 points, all assists, in 8 games. Based on his production in the Allsvenskan league the year before and the performance of other top prospects, Jeremy Davis of Canucks Army suggested that 0.52 points per game would be a reasonable expectation for Pettersson.

He shattered those expectations, averaging 1.28 points per game.

He could still be caught: Frolunda’s Ryan Lasch, who is just one point behind Pettersson, returned from injury recently and has one more game on March 10th. Of course, so does Pettersson, who could also aim to win the Håkan Loob Trophy for the most goals. His 23 goals this season are two behind Frolunda’s Victor Olofsson. He would need a hat trick and for Olofsson to be held off the scoresheet.

Pettersson is also a favourite for the Guldhjälmen (or Gold Helmet), the MVP award for the SHL that is voted on by the players.

Other fun facts: 12 of Pettersson’s 23 goals came when the score was tied, leading the SHL. Only three of his goals were scored while his team was ahead by more than one goal and none were scored into an empty net. So his goals were important goals.

Given his dominance in the SHL, it’s all but certain Pettersson will be in the NHL next season.

“We have not taught Elias anything about the game of hockey,” said Växjö Lakers head coach Sam Hallam after the game. “He is teaching us.”

If that is the case, what more does he have to learn in the SHL?

Going off Rob Vollman’s translation factors, which look at players that made the jump directly from another league to the NHL, the SHL translates at 0.58. Theoretically, multiplying Pettersson’s points per game from this season by 0.58 will give us his expected points per game in the NHL next season. That comes out to 0.74 points per game, or 61 points in an 82-game season.

That seems a tad high. 0.74 points per game would land Pettersson at 80th in the NHL this season and it seems optimistic to expect Pettersson to immediately produce at a first-line level as a 20-year-old rookie. That’s particularly the case when you consider his slim frame and his occasional struggles in big games at the international level.

But maybe it’s time to toss aside reasonable expectations. He’s unlikely to match the likes of Peter Forsberg and Kent Nilsson in the NHL, but who knows? Maybe Pettersson has the capability to be a legitimate superstar. At this point, with the way he shattered expectations in his post-draft season in the SHL, all bets are off.