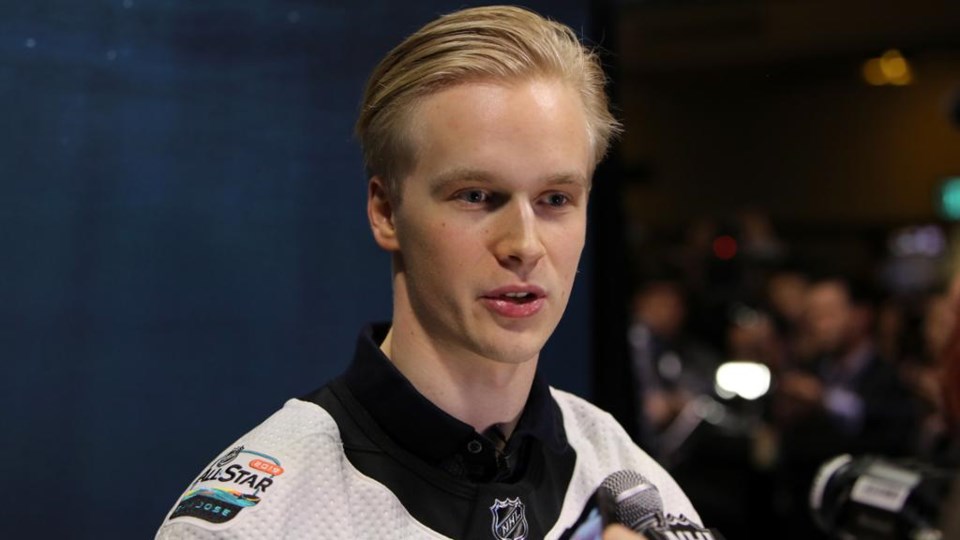 It may not seem possible for Elias Pettersson to open anyone’s eyes at All-Star weekend, given how he’s taken the league by storm in the first half of the season, but perhaps eyes were opened a little bit wider than they were already.

While Elias Pettersson didn’t get a shot at the Accuracy Shooting event at the 2019 NHL All-Star Skills Competition, possibly because the rest of the All Stars were terrified that he’d show them up, he still got a chance to prove that one of the few supposed weaknesses of his game isn’t a weakness at all.

Anyone who doubted Pettersson’s speed saw just how fast he can be. Jim Hughson called him “deceptively fast” on the broadcast, but there was nothing deceptive about his lap in the Fastest Skater competition.

Pettersson looked blazingly fast, with his jersey and hair fluttering in the breeze. He managed to complete his lap in under 14 seconds, which can be a tough barrier to beat. Last year, five of the eight skaters finished in over 14 seconds.

Pettersson’s time of 13.93 seconds landed him in fifth behind Miro Heiskanen, Mathew Barzal, Jack Eichel, and, of course, Connor McDavid, who won the event for the third year in a row.

“I saw Heiskanen fall, so the only thought on my mind was to stay on my feet,” said Pettersson to Scott Oake after his run. “I thought I did good, but I kinda already knew who would win that contest.”

At this point, the Fastest Skater event is basically a competition for second place behind McDavid, and Pettersson held his own with some of the fastest skaters in the NHL. Given his intense drive and desire to constantly improve himself, don’t be surprised if he shaves a few tenths of a second off his time next year.

For the record, Jake Virtanen’s time at this year’s Canucks SuperSkills event was 13.465, which would have placed him second behind McDavid’s 13.378.

As an added bonus for Canucks fans, Kevin Bieksa was on hand providing some wry commentary. Bieksa’s transition to the media side of the aisle has seemed inevitable for years, thanks to his cliche-free interviews and big personality.

Bieksa’s familiarity with the players led to some fun moments, but he couldn’t resist taking a shot at a player not at the event: Ryan Kesler.

“I was just talking with Ryan Kesler,” said Bieksa. “I’ve played zero games this year and I’ve been invited here and he’s played 45 and he’s got nothing.”

(Also, I love Hughson jokingly calling him “Bieska,” in imitation of Don Cherry)

Back to Pettersson: he didn’t come off quite as well in the Puck Control event, losing the puck on the first obstacle and lowering his head in disbelief. As soon as he realized he wasn’t going to get a do-over (like Heiskanen got in the Fastest Skater event when he fell), Pettersson quickly completed the rest of the course.

It actually led to a fun moment: with no chance of getting the fastest time, Pettersson nearly completed one of the hardest obstacles — the ringed gates at the end — with a quick flick between his legs.

Pettersson’s best moments at the Skills Competition, however, came in the one event reserved for the goaltenders: the Save Streak event. All of the skaters participated, taking turns coming in on the goaltenders with shootout attempts. The goaltender with the longest streak won the event.

On Pettersson’s first attempt, he owned Pekka Rinne with a callback to his penalty shot goal on the Predators goaltender earlier in the season.

On that penalty shot, Pettersson went with what became a signature move for him in Sweden: a hard fake to the backhand, before cutting back across the crease to tuck it in on the forehand.

Pettersson took a similar approach in the Skills Competition, deking to the backhand. Rinne, anticipating him coming back to the forehand like he did before, stayed up instead of dropping to his butterfly, so Pettersson just tucked it under Rinne on the backhand. It was brilliant and I feel sorry for Rinne if he ever has to face Pettersson in a shootout ever again, because now he’s in his head.

Holy guacamole, what a move from Elias Pettersson!#NHLAllStar #Canucks pic.twitter.com/lxZKFW6MG4

On his second attempt, Pettersson made short work of Devan Dubnyk, showing the slick finish that ought to have put him in the Accuracy Shooting event. He ripped the puck top corner as Dubnyk took the deke away with the poke check.

That was it for Pettersson, who had a front row seat for the second half of the Skills Competition. You have to wonder what was going through his mind as he watched the Hardest Shot competition and realized his 99.4 mph shot from Canucks SuperSkills would have tied him for third with Seth Jones.

The Capitals’ John Carlson took home the title with a 102.8 mph shot, while Brent Burns made the San Jose crowd happy with a 100.6 mph shot for second place.

As for the Accuracy Shooting, perhaps Pettersson could have competed with David Pastrnak, but he did put up a very fast time in hitting his five LED targets: 11.309 seconds. He didn’t, however, beat Brock Boeser’s time from last year: 11.136 seconds.

All in all, it was a solid showing for Pettersson in his first of what should be many All-Star Skill Competitions. Don’t be surprised if this drives him to get even faster and improve his already brilliant puck control.