Eyebrows were raised when Elias Pettersson was named to the Fastest Skater event at the 2019 All-Star Skills Competition. There were a few reasons why.
Jan 28, 2019 3:38 PM By: Daniel Wagner 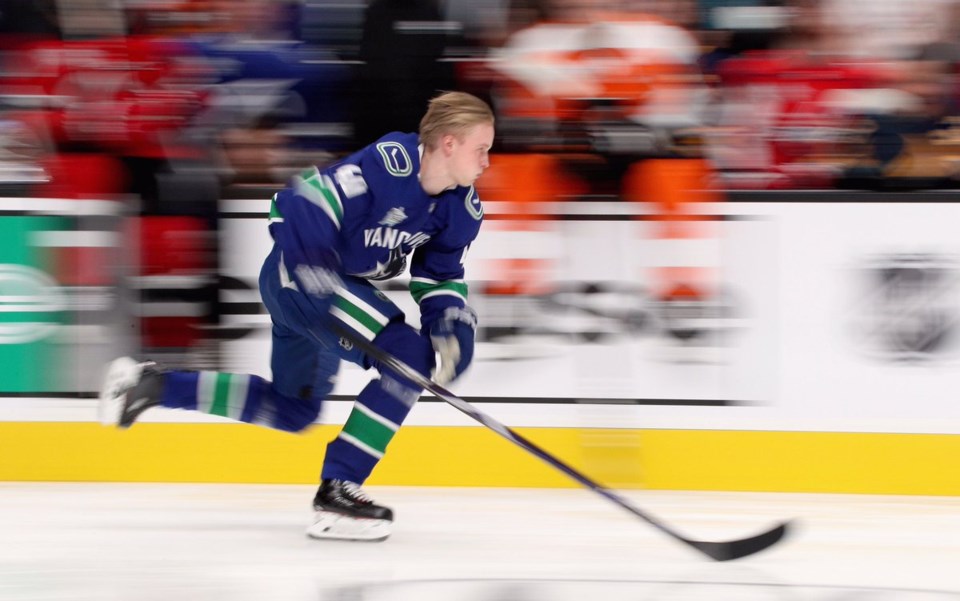 Eyebrows were raised when Elias Pettersson was named to the Fastest Skater event at the 2019 All-Star Skills Competition.

There were a few reasons why. One is that fans were eager to see what he could do in the Accuracy Shooting event with his NHL-leading 28.0% shooting percentage or in the Hardest Shot event with his near-100 mph slap shot.

Another reason is that Pettersson isn’t exactly known for having blazing speed. In his draft year, Canucks Army, who were very high on Pettersson, described his skating as “above average,” which sounds like damning with faint praise. Corey Pronman said that Pettersson had “heavy feet.” Elsewhere, his top speed was described as “decent” and there was general agreement that he lacked explosiveness and acceleration. In my profile on Pettersson, I described him as an “efficient skater.”

It’s not that Pettersson’s skating was bad; it just wasn’t seen as one of his primary strengths. Generally speaking, scouts were more impressed with his ability to process the game at top speed than play the game at top speed. When it came to his skating, his elusiveness and agility were highlighted more than his speed.

In the NHL, Pettersson’s speed doesn’t really stand out like the rest of his game. It’s almost like people are looking for a weakness in his game and, not finding one, they look at his speed. He’s whip smart, has incredible hands, can score goals every possible way, and is even dynamite in the defensive zone, but maybe he’s slower than the average NHL superstar?

I love Pettersson but Fastest Skater is the one category that he should totally not be in https://t.co/BTVP3ce20F

Is this a joke? Why is Petey in for fastest skater and not for shooting accuracy? #NHLAllStar #pettersson https://t.co/XE9Y2nHnLG

I wasn’t immune. While I suggested Pettersson could conceivably compete in every event at the Skills Competition, I conceded that the Fastest Skater was the one event that “wouldn’t make sense.”

We should have known better to doubt his ability to skate with the fastest skaters in the world.

Pettersson finished his lap of the rink in under 14 seconds, finishing in fifth place behind Connor McDavid, Jack Eichel, Mathew Barzal, and Miro Heiskanen. His official time was 13.930 seconds, a time that would have won him the event outright at a few past All-Star weekends.

It turns out, Pettersson might have been even faster than that official time indicates.

An enterprising Redditor, not satisfied with what he calls the “lax time-keeping” of the NHL, put Pettersson’s lap side-by-side with three of the other competitors synced with when each of them first pushed off to start their lap. What he found is that Pettersson actually finished faster than Barzal and was barely behind Eichel.

The Redditor, BladeParadigmHF, broke it down frame-by-frame like the Zapruder film, ascertaining that Pettersson was 10 frames behind McDavid at the finish line, which comes out to approximately 0.33 seconds. Taking McDavid’s time as the standard, Pettersson’s new time works out to 13.711 seconds, good for third, just behind Eichel.

What does this mean? Well, not much, beyond Pettersson being a fraction faster than we thought he was.

Still, the video is a fun watch, even if only to compare the skating strides and technique of some of the fastest skaters in the world. What seems to set McDavid apart the most is that he is constantly moving his feet — where the other skaters, including Pettersson, glide around the final turn, McDavid’s feet keep churning, continually picking up speed.

In fact, the skater that most closely emulated that aspect of McDavid’s stride is Kendall Coyne of the Minnesota Whitecaps, who competed in the Fastest Skater event. BladeParadigmHF also compared Coyne’s lap side-by-side with several others, including Pettersson’s.

So, now we know: not only is Pettersson one of the most sublimely skilled and intelligent players in the NHL, he’s also one of the fastest. Shame on us for ever doubting him.