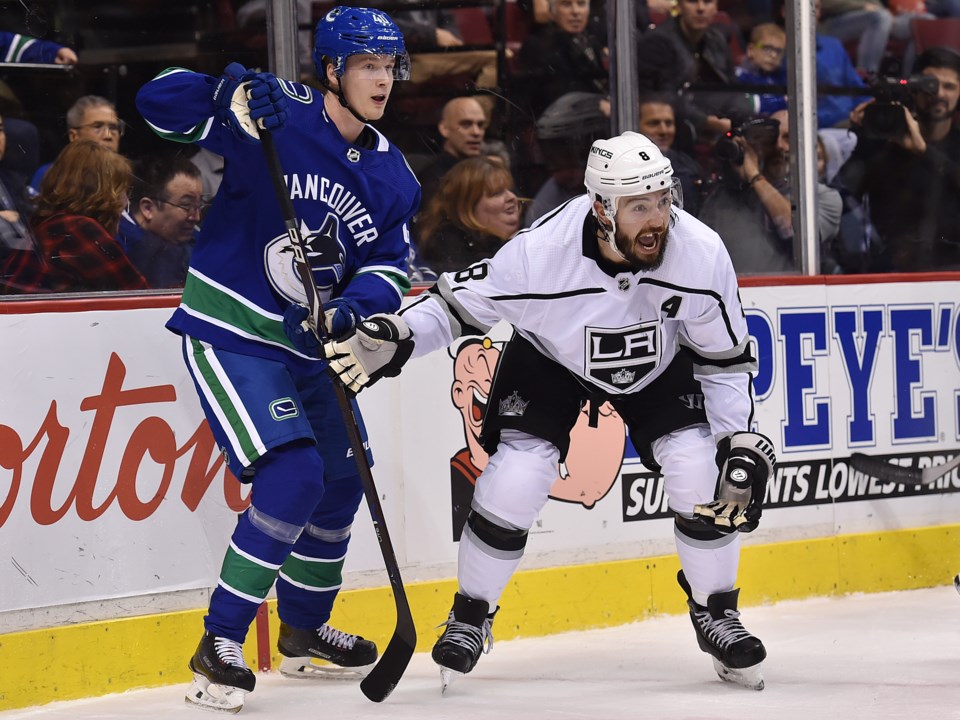 Elias Pettersson and Drew Doughty will be teammates at the 2019 NHL All-Star Game.Dan Toulgoet / Vancouver Courier

File this one under “Foregone Conclusions.”

In an announcement that surprised absolutely no one, Canucks super-rookie Elias Pettersson has been named to the 2019 All-Star Game. He is currently the only member of the Canucks on the roster for the Pacific Division, which is unsurprising, even if an argument could be made for both Bo Horvat and Brock Boeser.

That Pettersson is an All-Star is a no-brainer. Not only does he lead the Canucks in scoring, he also leads all NHL rookies in scoring by a wide margin. His 19 goals are eight ahead of the next best rookie, Andrei Svechnikov, and he has 14 more points than the second-best Colin White.

So yes, Pettersson was an obvious choice for the All-Star Game.

It was going to be tough for any other Canucks to make the team. At this point, each team includes just ten players and each team in the division needs at least one representative. With the hosting San Jose Sharks bound to have more representatives than other teams in the Pacific — they’ll be represented by Brent Burns, Erik Karlsson, and Joe Pavelski — that left just seven spots for the other seven teams.

That means each of the other Pacific Division teams have just one player on the roster.

There are four spots remaining, however, one for each division. Fans will be able to vote for the final player to join each team with the “Last Men In” vote. The lone Canuck on the ballot is Brock Boeser and he likely has a strong chance of winning the vote, as long as Canucks fans show up at the online poll in droves.

The All-Star Game isn’t really a game anymore, but a brief 3-on-3 tournament between the four divisional teams. It’s a fun format with plenty of open ice that should give Pettersson room to be creative and show off. Last year, Boeser turned that open ice into an MVP win, the first for a Canuck at the All-Star Game.

Could Pettersson make it 2-for-2 for Canucks rookies? If it’s once again a fan vote, you better believe Canucks fans will stuff the ballots.

The bigger draw is frequently the Skills Competition, where Pettersson could be a standout in several different events. Boeser won the accuracy contest last year and that could be a fit for Pettersson, who has shown his ability to snipe all season. Just three players in the NHL have a higher shooting percentage than Pettersson’s 26.0% and none of them have taken more than 50 shots this season like Pettersson has.

Pettersson could also be a darkhorse for the hardest shot competition, which he won at the Canucks SuperSkills with a 99.4 mph shot. Can he top 100 mph? That would be a sight to see and would hopefully silence anyone questioning his strength.

Pettersson’s hands would also make him a fit for any of the puck-handling contests, his playmaking would work for any of the relays that involve passing, and his creativity will be fun to watch in the shootout. He dazzled at two different skills competitions with the Vaxjo Lakers in Sweden.

Elias Pettersson flashing the wand at Växjö skills comp. Work in progress will be perfected & unleashed for #Canucks #Maestro pic.twitter.com/uBNt7wcj9R

Pettersson will get a nice bonus for being named to the All-Star Game: $212,500. Not too shabby.

By being named to the NHL All Star game - Elias Pettersson earns a $212,500 schedule A bonus as per Exhibit 5 in the NHL/NHLPA CBA#Canucks pic.twitter.com/kZUFrPVSS5

Here is the roster for the Pacific Division: