Questions continue following Canada's Sept. 7 severing of diplomatic ties with the Islamic Republic of Iran
Nov 30, 2012 2:00 AM By: Stanley Tromp 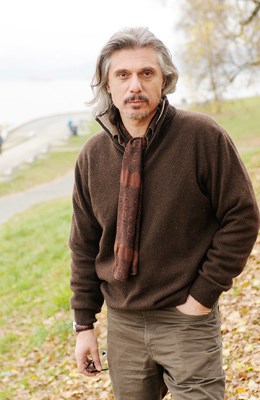 It's 9 o'clock on a Saturday night on Vancouver Persian Radio, at 93.1 FM and Internet radio redfm.ca. I am listening to callers speaking both Farsi and English on a lively current affairs talk show hosted by actor Ebby Mohseni, a fierce critic of the Iranian government for three decades.

Farsi pop music with jangling sitars starts off the show, then fades out to Mohseni's peppy voice: "Welcome to Persian Radio! What is on your minds? The lines are open." A wide range of issues come up, amongst them a woman's complaint that her foreign employment credentials are not recognized here. Yet most are still riled over an event that occurred on Sept. 7 and reverberates in the local Iranian community today.

On that day, the Canadian government cut diplomatic ties with the Islamic Republic of Iran, closing our embassy in Tehran and expelling Iranian diplomats from Canada. Foreign Affairs Minister John Baird declared that "Canada views the Government of Iran as the most significant threat to global peace and security in the world today."

"What I hear from inside Iran is that this embassy closure hit the Iranian government really hard, although they pretended it didn't do anything," said Ramin Mahjouri, a full-time journalist and publisher of the local weekly Paivand Persian Community Newspaper, who left Iran in 1983. (The paper, "the gateway to the Iranian community since 1993," is online at paivand.com) "Canada's action was a shock to them, but it hasn't changed their conduct."

Many questions arose. Will this decision have any impact on the Iranian government's conduct? Has it brought more benefit or harm to local Iranians? Are the people being unfairly punished for the behaviour of their government? The rift had been a long time coming and surprised few people here. In fact, the Harper government should have cut the ties years ago, say critics, for all the reasons cited by Baird and more. Yet even some who support the break-up seem ambivalent on whether its political impact on the Iranian government - if any - was worth the human cost.

Hadi Ebrahimi, age 58, owner and editor of another weekly Persian newspaper, Shahrvand B.C. (shahrgon.com), cites the case of an Iranian woman Nazanin Mahabad Fatehi, who was sentenced to hang for stabbing a man who tried to rape her in 2005. After pressure from the Canadian embassy and others, Fatehi was released.

"What is beneficial for these people now?" asks Ebrahimi, who moved to the Lower Mainland 23 years ago, where he now lives with his wife and children. "To negotiate or boycott? To have a door open or shut it down?"

Critics say keeping the diplomatic channels open could also have aided Iranian-Canadians in prison such as blogger Hossen Derakhsan and others. Derakhsan is a 37-year-old blogger from Ontario who is credited with starting the online revolution in Iran. After he visited Israel in 2006 to start a dialogue between Iranian and Israeli people, he was arrested in Iran and sentenced to nearly 20 years in jail for "cooperation with a hostile country" and insulting Islamic thought.

But Mahjouri disagrees. "There is no use talking to this Iranian government, and they get worse every day. They can't be persuaded on anything."

Iranians in Vancouver are facing old and new challenges. Many speak of being negatively stereotyped by westerners, struggling under economic sanctions, and facing the dark clouds of a very uncertain future and even nuclear war - or, more hopefully, the democratic fulfillment of the 2009 Green Revolution and the Arab Spring.

As part of the world's only theocracy, Iranians may seem caught as collateral damage in a political game between two civilizations, Judeo-Christianity versus Islam (which they perceive was heightened when Harper, buoyed by evangelical Christians, became Prime Minister in 2006 with a tougher pro-Israeli stance).

Amongst the hardest hit by the diplomatic rift were Iranian international students who had come to Ottawa to renew their travel visas, or needed to process their exemption from military service. (There were 3,247 international students from Iran studying at Canadian universities in 2010, and Persian clubs remain active at UBC and SFU.)

Trying to travel has become a major ordeal, with many rules too confusing and byzantine to explain here, including the need for "secondary visas" because direct air travel between the two nations is forbidden.

Iran does not recognize dual citizenship; those who have Iranian passports can still go to Iran, but others travelers need visas and had best contact the Foreign Affairs Ministry in Tehran for more information.

A year ago on human rights grounds, Ottawa forbade Iran to open a consulate in Vancouver, a refusal that displeased some local Iranians for travel reasons, but relieved others such as Mahjouri because they believed it would have been used as a base for Iranian government spying.

During the third electoral debate with Republican candidate Mitt Romney, U.S. president Barack Obama declared, "As long as I'm president of the United States, Iran will not get a nuclear weapon.

"We then organized the strongest coalition and the strongest sanctions against Iran in history, and it is crippling their economy." Obama said this to Romney to dampen his call on the possible need to invade Iran to quash its nuclear capabilities. Many local Iranians followed the U.S. election closely and were much relieved when Obama won, he seeming to be the lesser of two evils.

The sanctions are hurting indeed, but the people more than the government. Sanctions can occur in many forms. For example, in 2012, the Harper government passed a law to restrict financial transactions between Canada and Iran that could benefit the Iranian government. In response, the Toronto Dominion Bank closed a number of accounts of Iranian-Canadian customers in Canada, including Vancouver (although most other banks have not followed suit). Some complain that students and pensioners cannot obtain money from Iran.

There are about 70,000 Iranian residents in B.C., although Kambiz Sheikh-Hassani, former Charg_ d'Affairs of Iran's embassy in Ottawa, overstated the number at 120,000. They mostly live in North and West Vancouver, but also in Vancouver neighbourhoods such as Coal Harbour (according to the Vancouver Sun's ethnic mapping website).

Most are very well educated, and some are gays and lesbians who came to Vancouver to escape the death penalty for their sexual orientation in Iran. Local Iranians are generally divided between those who are afraid to speak on the record (especially women) because they want to return to Iran some day or have family still there, and the longtime exiles who are keen to publicly lambaste their former government.

Some were engaged in the Green Revolution, which was a name given to the protests after the 2009 Iranian presidential election against the disputed victory of President Mahmoud Ahmadinejad in major cities in Iran and around the world. It was also nicknamed the "Twitter Revolution" because of the protesters' use of Twitter and other social-networking Internet sites. (The government still tries but fails to block websites and blogs.) It was violently suppressed, with several dozen people killed, but protests erupted again in February 2011 at the time of the Arab Spring.

A whole panorama of Iranian culture is visible locally, from fine restaurants (such as Zeitoon and Cazba) to newspapers, radio stations (negintv1.net and the Iranian Women's Show on Co-Op Radio 100.5 FM). Five Iranian films were screened at this year's Vancouver International Film Festival, such as Kissing the Moon-Like Face, Like Someone in Love, and A Respectable Family. The movie A Separation won the Academy Award for Best Foreign Language Film in 2012, the first Iranian film to do so. Farsi language television shows are popular on Ten-TV, ITC-TV and Shaw TV (such as Beyad-E-Iran, Goftego, Iranian's Pop, Parvaz and Vancouver Nights), and Iranian live concerts, dances, art lectures and poetry readings often appear in the city.

Last July, Hamid Mohammadi, Iran's cultural affairs counselor at the Iranian embassy in Ottawa, gave an interview in Farsi to an Iran-based website directed at Iranian expatriates in Canada.

He described them as having "characteristics" that "set them apart" from other immigrants, and urged all Iranian-Canadians to aspire to "occupy high-level key positions" and "resist being melted into the dominant Canadian culture."

But as with so much advice from the Iranian government, these entreaties seem to have been mainly ignored. For example, compared to Chinese and Indo-Canadians, few Iranians have run for election here. Speaking to the Courier, Kei Esmaeilpour, the Vancouver-based president of the Civic Association of Iranian Canadians, posited two reasons: "Iranians have a much shorter history in Canada, and some might not realize that it's safe to get involved in politics here, unlike in Iran."

That might change. He said his group started two years ago to encourage more local Iranians to become involved in the Canadian political process, and run for office.

I asked several locals: What are the myths that many Canadians harbour about Iran? They replied that one is in not seeing the diversity, and confusing "Persia" with "Iran." Persia is only one element of the nation, which also consists of many other groups such as Turkish and Kurdish Iranians. A second error is not realizing that although all females must wear the head scarf in public (but need not wear the veil), they can remove it in private. Third, most Iranian people are not anti-Semitic.

Will the Iranian people ever be free of ayatollahs? Opinions vary starkly.

"I have absolutely no hope in Green or any other kind of peaceful revolution," said Mahjouri.

"They will not go out in a peaceful way. The only solution is for the people inside Iran to rise up. Outside intervention won't work because the Iranian government would rally all the people together against an external invader."

But Ebrahimi disagrees: "I think there is much hope for the future."

Back at Ebby Mohseni's Saturday night radio talk show, one man calls in to complain the show is rambling too much: "Some people talked for a half hour. You should be more in control!"

"I cannot control you, so how can I control others?" Mohseni replies. "You have to be more open to critics, otherwise you will be just like mullahs in Iran!" (Mullah is a derogatory term for a petty Islamic cleric, used in Iran against an ayatollah to ridicule his religious authority.)

Caller: "I am mullah, you are mullah, we are all mullah! We are doing this to ourselves!"

The man objects to the embassy closures. "What the Canadian government did was totally irresponsible, to close all the negotiation channels with the enemy. It's bringing hardship to innocent Iranians living here. They want to go to Iran to visit their parents, and sometimes our parents and grandparents in Iran want to come here. Now they have to wait for six months and send their documents to Turkey. But I am still against the Iranian regime. I escaped political persecutions."

In the end, though, a common theme persisted amongst the callers: that the peoples of both countries could get along fine if their governments would just step out of the way.

"We care about politics because it is our destiny," said one older woman. "Young and old folks' thinking is almost the same, but their behaviour is different. I love both countries, and I hope someday we don't have to talk about these things."

The show eventually fades back to Farsi pop music.

"If he ever goes to Iran, he will be in trouble," Mohseni later muses to me about the last male caller. "But we are a people raised to take risks."