Every week, flowers are left for Kitsilano’s war dead. You'll be surprised who's doing it

A six-month mystery at West Side secondary school has an unexpected conclusion
May 4, 2018 3:41 PM By: John Kurucz 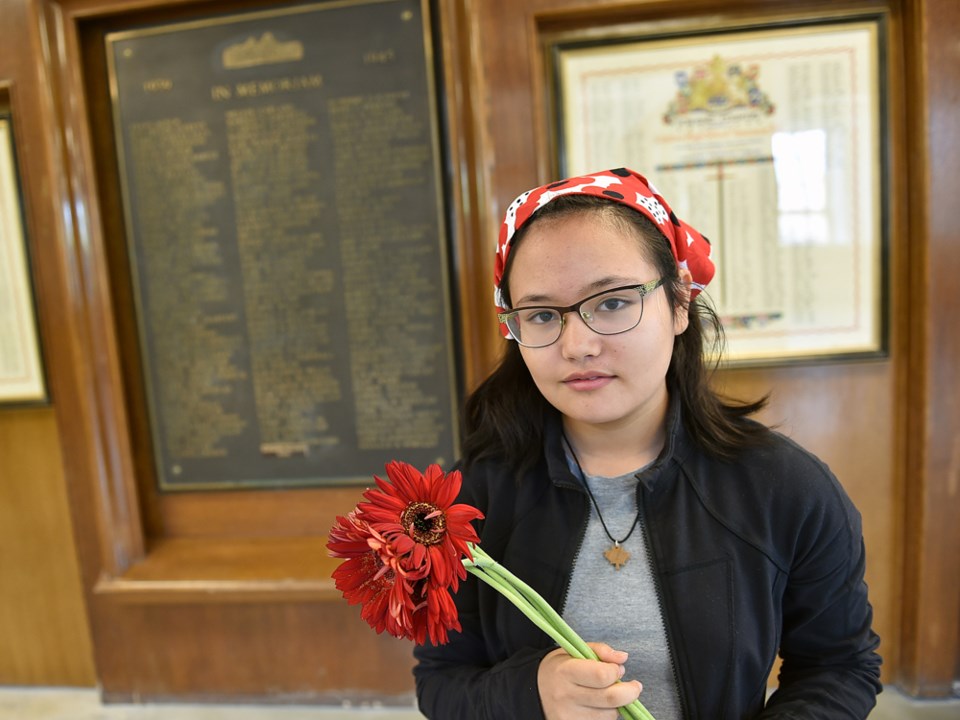 A curious case combining empathy, mystery and a bit of whodunit has been permeating the halls of Kitsilano secondary school for the better part of six months.

It revolves around 100-plus lives lost four generations ago on the other side of the Atlantic, and flowers widely available in any Vancouver florist today.

The plotline begins in December in a somewhat obscure corner of the West Side school, near a plaque — referred to at the school as a war board — honouring the 141 former Kits students who died during the Second World War.

It was installed in 1946 and based upon meticulous records kept by then school librarian Helen Creelman. Newspaper clippings and correspondence with the soldiers helped Creelman place together where those soldiers lived in Kits, where they fought abroad and when they drew their last breaths.

From out of nowhere and with little desire for recognition, flowers began showing up underneath the plaque on a weekly basis late last year.

The surprise had school staff flummoxed.

“The only thing that I could come up with was that it was an older person whose brother or father died in the war and they’re walking into the school and leaving some flowers,” said Kits social studies teacher Craig Brumwell.

There was the thought that perhaps some of Brumwell’s Grade 10 or 11 students were behind it. Since February, those students have been researching the war dead from the school and greater Kits community.

In late April, the months-long riddle was solved. It wasn’t Brumwell’s students, nor elderly Kits residents.

“I was really sad that all these people died, but also really grateful that they fought for their country,” Leznoff said of her first experience walking by the war board last September.

Leznoff’s knowledge of past world events crystallized two years ago when her family spent a year living in Strasbourg, France. Strasbourg is in Alsace-Lorraine, a region between France and Germany that was a flash point of political volatility for centuries prior to the Second World War. Allied forces finally liberated the area from Nazi occupation in late 1944.

It was Leznoff’s classmates in Strasbourg who made Canada’s wartime contributions clear to her. She travelled to Vimy Ridge and other Commonwealth cemeteries that mark the final resting place of countless Allied soldiers, many of whom were Canadian.

“A couple of the kids always brought flowers to these memorials,” Leznoff said. “I thought it was really nice and wanted to do the same. I imagined all the people that sacrificed their lives for their country. It’s not like I knew any of them personally; it’s just really nice.”

Brumwell learned of the flower campaign only within the last month. Other faculty knew something was up as well, and were surprised to see the gesture come from one of their own.

“That means that somebody is keeping this alive. To find out that this is actually a 13-year-old is so impressive,” Brumwell said.

Leznoff’s go-to keepsakes are daffodils and tulips, though she sometimes opts for gerbera daisies. Some are bought in the neighbourhood, others are picked from her garden. The Kits home she lives predates the First World War.

“I think about those people’s families,” Leznoff said. “My house was built in 1912 so there’s a high possibility that one of them actually lived there, but I don’t know yet.”