Fans want “Holiday” back as the Canucks’ goal song, but here’s what it should be

This is what happens when the Canucks score eight goals in their home opener: their goal song becomes news.
Oct 15, 2019 5:31 PM By: Daniel Wagner 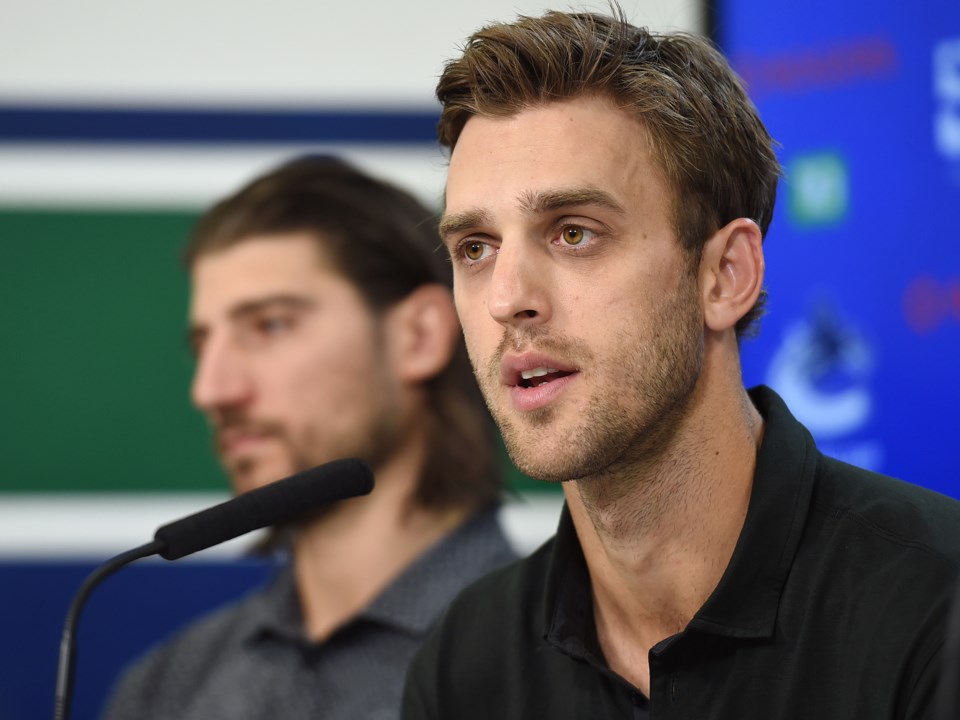 This is what happens when the Canucks score eight goals in their home opener: their goal song becomes news.

A certain segment of the Canucks fanbase isn’t happy with the new goal song selected for the 2019-20 season, and apparently being forced to hear it eight times in one night was just too much for them to handle. Instead of just complaining about it on social media, they’ve turned to the Internet’s favourite form of action: an online petition.

The Canucks fan behind the Twitter and YouTube account “Famous Goal Horns” has started a petition on Change.org to bring back “Holiday” by Green Day as the Canucks’ goal song. “Holiday” was the goal song for the 2010-11 season, so it has nostalgic value, and has been brought back since then, first as Henrik Sedin’s individual goal song for the 2016-17 season and then again in the 2018-18 season.

There are a number of reasons why “Holiday” works as a goal song. It has an instantly-recognizable power chord riff, a memorable and singable guitar lead line, and shout-along “Hey”s spread throughout. It works, and works well.

For the 50th Anniversary Season, however, the Canucks wanted something different. According to DJ Barron S, who started as the in-game DJ last season, said in a since-deleted Instagram post that while she advocated for “Holiday,” the group that decides on such things wanted to go in a new direction in honour of their “exciting, young team.”

“Out collective team primarily felt that this turning point in Canucks history deserves to be marked by a fresh, new goal song,” she said.

The “fresh” and “new” song they landed on was “Ain’t Talkin’ ‘Bout Love,” a Van Halen song from 1978. I’m not entirely sure how a song older than every single player on the Canucks counts as “fresh” or “new” or connects with their “exciting, young team,” but you can see why they went with this particular song.

Like “Holiday,” it has a big guitar riff and “Hey hey hey!” You can see how the Canucks might feel that fans would rally around this goal song, shouting along with every “Hey.” It’s even been used as a goal song in the NHL before, in the late 90’s for the Philadelphia Flyers.

Unfortunately, in practice it’s a dud. In all the cheering after a goal, the guitar riff becomes a muddled, unrecognizable mess and it doesn’t help that the riff starts with a quieter, palm-muted part that gets lost in the sound of the goal horn and crowd.

In her Instagram post, Barron S suggested the team would bring back “Holiday” if the petition got 50,000 signatures, which felt to some fans like their beloved goal song was being held for ransom. The petition currently has a little under 2000 signatures. But is going back to “Holiday” the right answer?

While “Holiday” works as a goal song and has nostalgic value, like “Ain’t Talkin’ ‘Bout Love,” it’s also built around a minor key: E-minor. It sounds a lot more angry than celebratory.

The Canucks could go other directions. The Toronto Maple Leafs have gone a more whimsical route, with Hall & Oates classic “You Make My Dreams” ringing throughout their arena when they score. The 2016 World Cup of Hockey had unusual choices like Wiz Khalifa’s “We Dem Boyz” and Chiddy Bang’s “Opposite of Adults.”

Then there was Team Canada at the 2018 World Juniors, who got attention for their sing-along goal song, “Hey Baby” by DJ Ortiz. It’s absurd and ridiculous, but it won over fans, who didn’t just sing along in the arena, but in the streets as well.

Perhaps the Canucks could go with a song from a Vancouver band, like Japandroid’s “The House That Heaven Built,” Trooper’s “Raise a Little Hell,” 3 Inches of Blood’s “Deadly Sinners,” D.O.A.’s “The Enemy,” or The Odds’ “Heterosexual Man.” Or maybe not.

Sure, it would be unorthodox, but what about Stevie Wonder’s 1970 hit “Signed, Sealed, Delivered I’m Yours”? How about the horns of Chicago’s “25 or 6 to 4” or the instantly-recognizable guitar riff of “Layla” by Derek and the Dominos? Here's an idea: the stampeding rhythm of “Immigrant Song” by Led Zeppelin. Just imagine all of Rogers Arena crying out Robert Plant’s signature “Ah-ah-aaaaaaah-ah!”

I think we all know what the Canucks’ goal song really ought to be, however.

When did Brandon Sutter hit his high with the Canucks in goals? It was in 2016-17, when his goal song was “Callin’ Baton Rouge.” That was when the Canucks had individual goal songs, a fun concept in theory, but with mixed results in practice.

But if the Canucks want Sutter to get back to his previous goalscoring ways and give the Canucks three scoring lines, they need to bring back his good luck charm: “Callin’ Baton Rouge.”

Matt Bartkowski used it as his individual goal song in 2015-16. Guess what happened? He set a career high in goals. Clearly “Callin’ Baton Rouge” is the solution to the Canucks’ goal-scoring woes of the past couple seasons.

It’s instantly recognizable with its opening violin/banjo riff and its key of D-major is bright and celebratory. It’s unexpected and unusual — it’s guaranteed that no other NHL team would have this as their goal song — but, most importantly, it’s really annoying.

You want a goal song to aggravate the opposing team and their fans when it plays: what’s more aggravating than country? It’s easy to imagine opposing fans getting angrier and angrier every time “Callin’ Baton Rouge” plays in Rogers Arena, as the Canucks send another team home unhappy. Talk about making Rogers Arena a difficult place to play.

The simple truth is that no one will care much about what the Canucks’ goal song is, as long as the Canucks score lots of goals. If the Canucks win a lot of games and get back to the playoffs, it will barely matter what they use as a goal song: fans will connect with it simply because they associate it with a winning team.

So, sure, bring back “Holiday” or go with the correct choice — “Callin’ Baton Rouge” — or play a Gregorian chant after every goal. The goal song is only a problem when the Canucks don’t score enough goals.