Federal fisheries and oceans minister confident pipeline will be built

North Vancouver MP Jonathan Wilkinson says, “The work the court was looking for has already been done.”
Sep 1, 2018 7:00 AM By: Jane Seyd 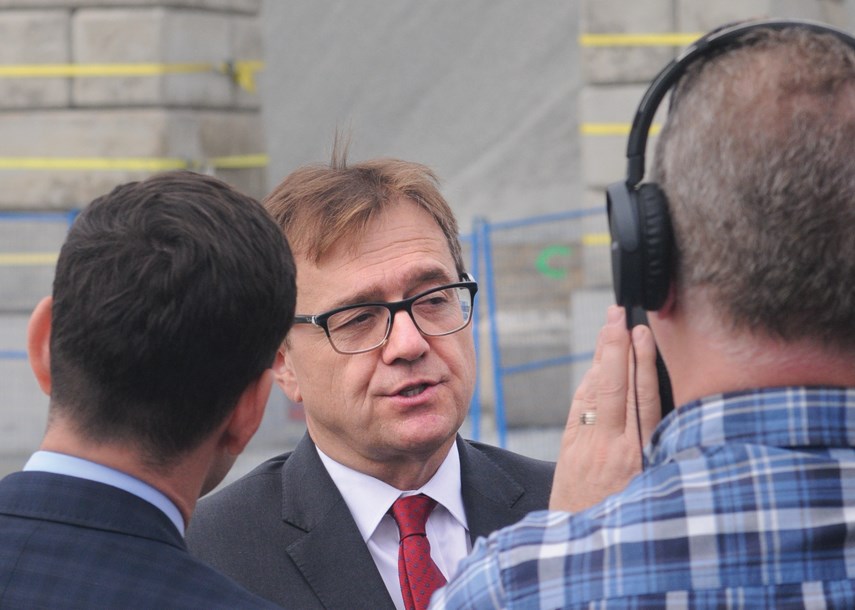 North Shore Liberal MPs said Friday they are confident setbacks dealt to the Trans Mountain pipeline project in a federal appeal court ruling can be overcome.

On Thursday the federal court of appeal handed down a ruling that said that the federal government failed to adequately consult with First Nations on the Trans Mountain pipeline expansion and that the review of the project was inappropriately limited by not addressing potential impacts from marine tanker traffic.

North Vancouver MP Jonathan Wilkinson, who is also the federal minister of fisheries and oceans, said he feels strongly the work done by the government on the Oceans Protection Plan and to protect southern resident killer whales will eventually be deemed sufficient to allay environmental concerns raised in the court decision.

Responding to questions from the media Friday, Wilkinson said the decision to exclude potential environmental impacts of marine shipping in the national energy board’s review of the pipeline expansion was made by the previous Conservative government.

But since then, the government has put together a “very robust action plan” to protect southern resident killer whales, said Wilkinson.

“The work the court was looking for has already been done,” he said.

Wilkinson said he believes the pipeline can be built in a manner that respects the wider environment and the need to protect the whales.

“If you look at the number of container ships that come into this harbour every year it’s about 3,500,” he said. “What we’re talking about is a five to eight per cent increase in overall (shipping) traffic (in the harbour).”

The government is taking steps to slow down the speed of ships, and make changes to shipping lanes to move them away from areas where whales feed, he said. “Killer whales will be far better off going forward than they ever had been.”

Wilkinson added, “People have to step back and understand the facts,” when it comes to possible pollution from oil tankers.

Wilkinson said the 3,500 container ships coming through the harbour each year also contain large amounts of bunker sea fuel, “which isn’t that different from diluted bitumen.”

The government’s responsibility is to ensure “all shipping in the harbour is safe such that you don’t have spills and when there are spills like what happened with the Marathassa, which was a container ship,” there are resources to clean up spills in a timely manner, he said.

Wilkinson acknowledged that on the issue of First Nations consultation, the courts are “helping to define what the duty to consult really means.”

“We certainly want to ensure the consultation we’re doing is appropriate. We’re going to be reflecting on that over the coming days,” he said.

In its written ruling, justices of the federal court noted the duty to consult means more than simply allowing Indigenous peoples “to blow off steam” before the Crown proceeds to do what it always intended to do.

“The meeting notes show little or no meaningful responses from the Crown consultation team to the concerns of the indigenous applicants. Instead, too often Canada’s response was to acknowledge the concerns and to provide assurance the concerns would be communicated to the decision-makers,” the court noted.

Leaders of the Tsleil-Waututh and Squamish nations, who have vigorously opposed the pipeline project, greeting the ruling with jubilation on Thursday.

Wilkinson said the government is still deciding how it will respond to the decision. That could include appealing to the Supreme Court of Canada or going back to the National Energy Board and doing additional work on consultation and environmental issues, he said.

Pam Goldsmith-Jones, MP for West Vancouver-Sunshine Coast-Sea to Sky Country, echoed Wilkinson’s comments on Friday. She said she is still convinced the pipeline should be built. “It’s a first step in transitioning to a lower carbon future,” she said.

Wilkinson said he doesn’t believe the court ruling puts the pipeline in jeopardy, but added it underlines the risks “that were not something a private sector pipeline owner could bear,” he said.

The federal government’s decision to buy the pipeline from Kinder Morgan for $4.5 billion was still the right one, Wilkinson said “to ensure a project that has been deemed to be in the national interest gets built.”