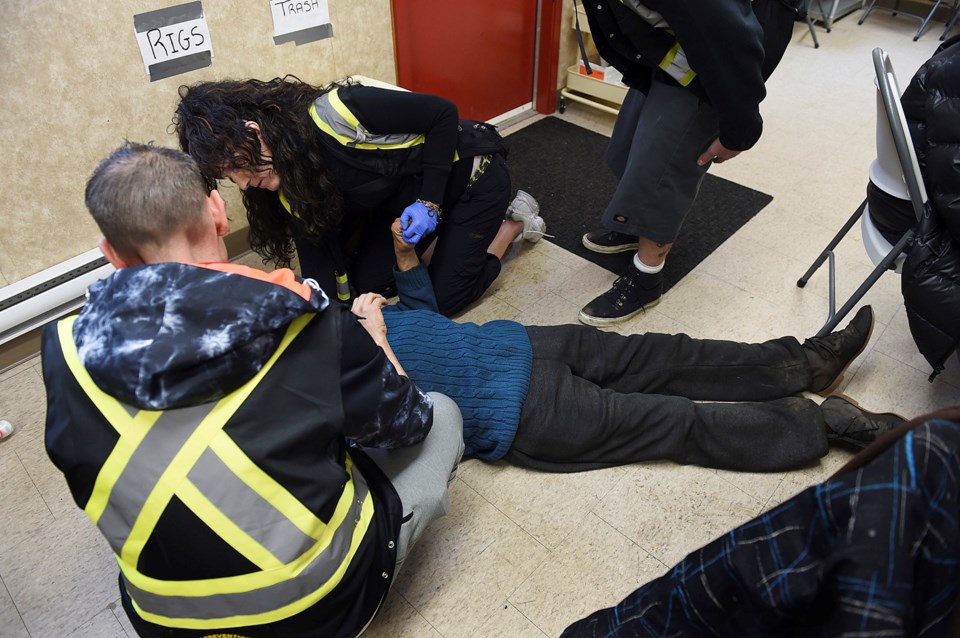 Statistics released by the BC Coroners Service Nov. 9 point to 1,103 overdose deaths in the province as of Sept. 30. More than 80 per cent of all illicit drug overdose deaths (914) had fentanyl detected, an increase of 147 per cent over the same period in 2016. Photo Dan Toulgoet

Death has been a constant in Kyle’s life for 25 years.

It’s a narrative that goes hand in hand with his lifestyle, and shows no signs of abating.

Kyle — not his real name — is a fentanyl dealer. He says he’s killed people with his own hands, and by extension, through his line of work. Kyle spoke to Vancouver comedian Mark Hughes as part of Hughes’ recently-launched podcast called Pulling the Trigger. The Courier attempted to speak with Kyle, but he declined on more than one occasion.

He spoke to Hughes earlier this month, and the conversation went live today (Thursday, Nov. 23).

“There is a guy I went to elementary school with who has personally died from my product 27 times,” Kyle said.

At 38, Kyle has been trafficking drugs for roughly 25 years. The only interruption during that time was when Kyle went to prison between the ages of 15 and 19 for manslaughter.

Out of prison before he turned 20, Kyle took a warehouse job as part of his parole and probation. He went back to selling drugs soon after — cocaine, heroin and MDMA.

He deals on behalf of a “mother organization” and says he continually resisted moving into the fentanyl trade.

“It breaks my heart. I hate it. It was by far not what I wanted. It was not what I saw for this business. I fought it at every opportunity. I fought it, but this stuff is here by popular demand,” Kyle said. “This is not dealers imposing their will on Vancouver. This is Vancouver saying, ‘Hey we heard about what happened over in Europe, we want that stuff.’”

Kyle said the tipping point for him came when he had a cache of heroin in his home that wasn’t moving.

“As a dealer in opiates, I was loathe to get into the fentanyl trade. People called me a martyr for the cause of heroin. I was a straggler. I didn’t want to. But it’s reached full market saturation. If you buy a kilo of heroin now, you may as well pave a road with it. Nobody wants it.”

Kyle says one of the biggest misconceptions around fentanyl is the notion that people take fentanyl mistakenly, or that a fatal overdose is the result of a tainted mixture with cocaine or heroin.

“[The overdoses] are from people expressedly asking for fentanyl,” Kyle said. “They aren’t just saying, ‘Give me some heroin.’ They are people screaming for fentanyl.”

Kyle described fentanyl as similar in appearance to the candy Nerds, and it’s sometimes referred to as “Purple Pebbles.”

One-tenth of a gram can kill someone. It typically arrives in Vancouver via mail order, usually in the finger of a latex glove.

Kyle has to wear a gas mask when he unpackages it.

Asked why he would sell a volatile product that can kill his client base, Kyle responded, “They’d go to Joe Blow that has it. It’s supply and demand. If I don’t do it, somebody else will.”

Statistics released by the BC Coroners Service Nov. 9 point to 1,103 overdose deaths in the province as of Sept. 30.

Hughes says he knows at least 60 people who have died from fentanyl over the last 18 months. He was addicted to heroin and cocaine for close a decade, and spent time in jail for armed robbery. Hughes has been sober for 11 years and supplements his stand-up comedy work by selling fire alarms. He came to know Kyle through his comedy gig and it was through their occasional chats on Facebook that Hughes got him to talk.

“Based on watching his body language and listening to him, I think there is some conflict there about what he is doing. I can relate to that,” Hughes said.

Kyle is originally from California. He described his father as “An uncouth asshole. Not like a cool, toy drive biker. A scum-of-the-earth biker.” Kyle’s family came to Canada via his uncle, a heroin dealer, and he grew up in East Vancouver.

Kyle has two kids and isn’t married. The eldest child is 13.

“He can see what’s going on. And it’s scary, because all of a sudden he’s like, ‘Does it really matter if I graduate, Dad?’ And I say yeah, it f***ing matters.”

Kyle said he does what he does because he has no other choice.

“I have zero education,” he said. “I didn’t have a chance to get an education. There’s no way that I can make enough to support two children in Vancouver in any other occupation that I’m qualified for.”

Kyle said fentanyl’s emergence across Canada is not an if, but a when.

“If you live in a city where fentanyl is not killing everybody, it’s coming soon,” he said. “When it does come… heroin is going to be as romanticized as opium and old leather.”

The entire conversation can be heard here: