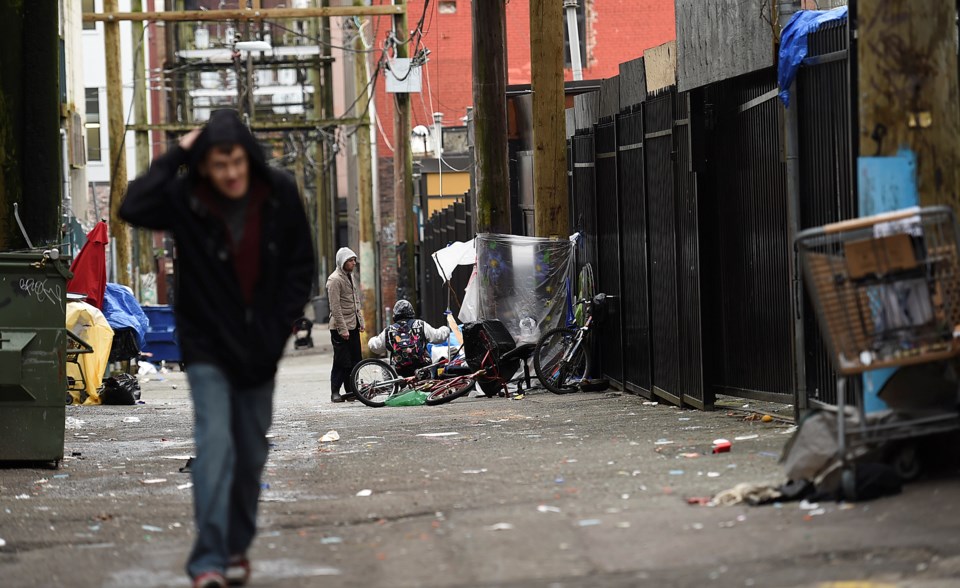 City council will decide Dec. 13 whether it wants to increase a proposed property tax hike of 3.4 per cent to 3.9 per cent to fund programs and staff to respond to the overdose drug crisis in Vancouver. Photo Dan Toulgoet

The deadly fentanyl crisis in Vancouver has reached city hall and council is now considering boosting property taxes by an additional .5 per cent so it can raise $3.5 million to implement a series of measures, including hiring 16 new firefighters, to respond better to the health emergency.

News of the .5 per cent hike came in a memo Monday to council from Patrice Impey, the city’s general manager of finance. Raising the additional $3.5 million would mean the proposed property tax hike of 3.4 per cent that was publicly announced last month would jump to 3.9 per cent.

“As it is unclear if the crisis has peaked or if it will continue to worsen, the capacity for the organization to respond is difficult to anticipate,” Impey wrote in her memo, which is now posted on the city’s website. “It is clear, however, that the crisis is creating considerable stress on our staff and the community. It would, therefore, be prudent to ensure there is capacity in the organization should it be required to deal with an escalating crisis.”

Impey, who spoke to council Wednesday about the possible tax hike, said the $3.5 million could be added to a $4-million city contingency fund for a grand total of $7.5 million directed at the crisis. Drug overdoses have killed more than 600 people in B.C. this year, including 124 in Vancouver between January and October. More than 60 per cent of the deaths have been linked to fentanyl, a synthetic narcotic said to be 50 to 100 times more toxic than other opioids such as morphine.

The most expensive measure of the city’s plan would be to spend $1.8 million annually to ensure a fire department medic unit would be able to serve on each of the department’s four shifts. That would mean hiring 16 new firefighters to back fill positions left vacant for a medic unit to be deployed.

Fire Chief John McKearney is urging council to approve the .5 per cent property tax hike so firefighters can better respond to the unprecedented number of overdose calls in Vancouver. In November alone, firefighters responded to 735 overdoses and administered the life-saving naloxone 35 times.

“Our resources are completely strapped,” said McKearney, noting he’s had to take rescue units from other halls and approve overtime for firefighters to respond to the calls. “The toll that it’s taken on our firefighters is too great to ignore.”

Rob Weeks, president of Vancouver Firefighters Union (Local 18), was at city hall Wednesday to hear Impey elaborate on details in her memo and address the need for medic units. Weeks echoed the concerns of McKearney, saying the No. 2 Fire Hall near Main and Hastings is the busiest hall in Canada.

“They’re on pace this month to do 1,600 runs,” Weeks told the Courier. “That kind of volume is unheard of — and with no additional resources. So this additional medic unit will certainly be part of a long-term solution and help address the problem.”

Despite what the public might think, Weeks said, it’s not practical to continue relying on other halls to dedicate firefighters and trucks to areas such as the Downtown Eastside, where the overdose crisis is at its worst. Doing so would only increase response times for firefighters responding to calls in other parts of the city.

“The call volume may not be the same [at other halls] but the risk is still there,” he said, noting even a 30-second increase in response time could be the difference in saving a life. “We’d argue that it’s not appropriate to take those resources from communities that need them.”

The possibility of a .5 per cent hike set off a political debate outside council chambers between Vision Coun. Geoff Meggs and NPA Coun. George Affleck, who spoke to reporters during a break in Wednesday’s meeting. In defending the tax hike, Meggs said the city’s responsibility includes firefighters and it was appropriate to better fund them to respond to the overdoses.

“It’s unprecedented, it was not forecast and we’re not going to leave our first responders, or the frontline people in the shelters, stranded for lack of funds in the coming year,” said Meggs, noting he hoped council would be unanimous in supporting the tax hike at a vote scheduled for Dec. 13. “Nobody likes this, but I would prefer to deal with it and say we’ll do our part to deal with this disaster, which is occurring on our streets.”

Affleck said he recognized the concern of firefighters regarding the overdose crisis. But, he added, talk of a .5 per cent tax hike has served as a distraction for the Vision Vancouver-led council to avoid the fact that increases to property taxes, recreation and permit fees and utility fees amount to an overall 5.1 per cent hike for taxpayers.

“It’s emotional, obviously,” he said of adding a .5 per cent tax hike directed at the fentanyl crisis. “But it worries me because I don’t believe it’s good governance. It’s not how we should be approaching how we manage our city.”

Affleck said the overdose drug crisis is an issue for the provincial and federal governments and he warned that council should not begin spending money on services that should really be funded by senior governments.

“It shouldn’t be a Vancouver-made solution,” he said.

City hall is hosting a forum Thursday night on the overdose drug crisis.