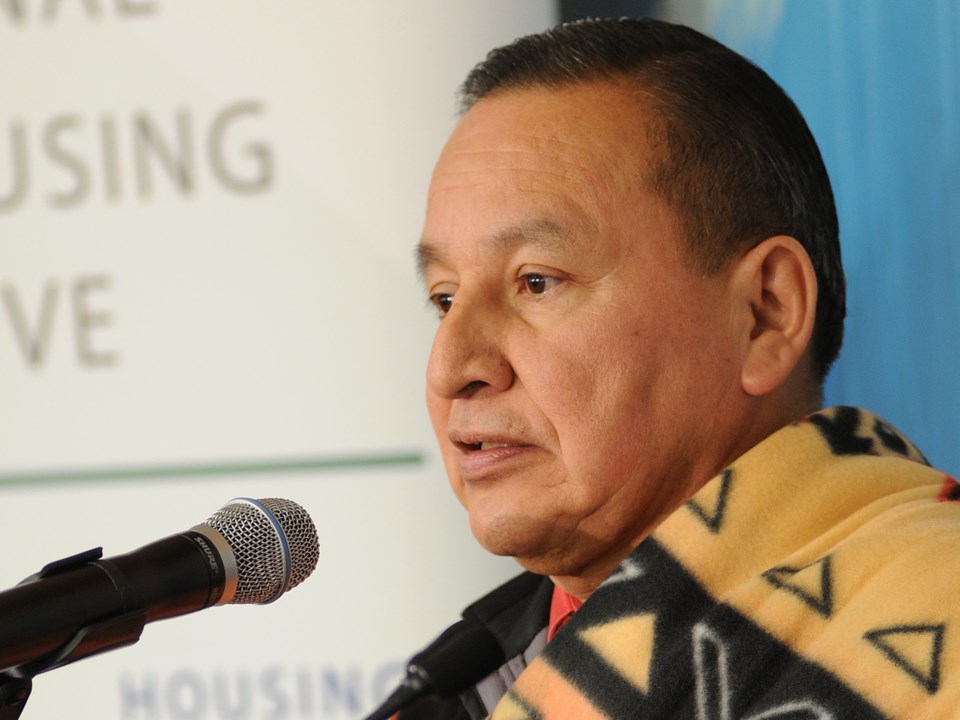 Grand Chief Stewart Phillip, president of the Union of B.C. Indian Chiefs, said the NDP’s decision on Site C is contrary to commitments made by the party to reconcile with First Nations. Photo Dan Toulgoet

The president of the Union of B.C. Indian Chiefs says he is “deeply and bitterly disappointed” with the decision of Premier John Horgan’s government to proceed with the $10.7-billion Site C hydroelectric dam project.

Grand Chief Stewart Phillip said Horgan’s announcement Monday to continue with the three-year-old project on the Peace River is contrary to the NDP’s commitment to reconciliation and has left him and many First Nations people “absolutely outraged.”

“There was every expectation that they would bring the Site C project to a halt,” said Phillip, referring to the NDP’s election campaign. “Mr. Horgan traveled up to Treaty 8 territory, was on the river and we have pictures with him holding up a sign that says, ‘Site C sucks.’”

Phillip said Horgan and his candidates campaigned to adopt the principles of the Declaration on the Rights of Indigenous Peoples and committed to defend and protect the environment. Many people donated money to the NDP based on those commitments, he said.

“I’m totally convinced Horgan has inflicted irreparable harm on the NDP brand in British Columbia, and I don’t believe the party will recover from that,” said Phillip, acknowledging he has been a longtime supporter of the NDP. “That’s why this is so infuriating. This will go down in the annals of history as black Monday for the NDP.”

Added Phillip: “The anger and resentment and outrage is rippling through this province in a major way today. I think if I would have had [an NDP] card today, I would have burned it.”

Horgan announced Monday from the B.C legislature in Victoria that he wanted to “make better a bad situation” by proceeding with the Site C project near Fort St. John that was previously approved by the former B.C. Liberal-led government.

The premier acknowledged the project doesn’t have the support of all Treaty 8 territory First Nations but said their voices and perspectives were heard before his cabinet decided to proceed with the mega-dam, which threatens to flood more than 5,000 hectares of the Peace River valley.

“I’m not the first person to stand before you and disappoint Indigenous people,” Horgan said. “But I am I think the first that’s stood before you and said that I am going to do my level best to make amends for a whole host of issues, a whole host of decisions that previous governments have made to put Indigenous people in an unwinnable situation.”

Horgan said the decision, which he and his cabinet made privately Dec. 6 after three sessions that lasted a total of nine hours, was unanimous and made knowing it would disappoint many British Columbians, including First Nations, his own family members and friends.

Site C is located in an area that is home to the Prophet River and West Moberly First Nations, which have said the project could put more than 107 kilometres of river valley and their tributaries under water, including ancient burial grounds and cultural sites. After hearing Horgan's decision, the bands  issued a statement saying they intended to seek a court injunction to halt construction on the project, and launch a separate civil action for "treaty infringement."

B.C. Hydro has reached benefits agreements with other First Nations, including the McLeod Lake Indian Band and the Saulteau and Halfway River First Nations.

“I know many of us would wish that the circumstances were different, but I and my colleagues have to accept the situation as we find it, not as how we would wish it would be,” said the premier, who accused the previous government of approving the-then $8.3-billion project in 2014 without first consulting the B.C. Utilities Commission.

In fulfilling a campaign promise to have the commission review the project, Horgan said the findings left his government “just one clear choice — that was to proceed with a $10.7-billion project, or cancel that project and absorb $4 billion in construction and remediation costs.”

More than $2 billion has already been spent on the project near Fort St. John. It would cost another $1.8 billion to remediate the site, if the project were scrapped, according to the review done by the utilities commission.

That bill would have to be paid by B.C. Hydro customers or taxpayers. To pay off that debt, Horgan said, it would amount to a 12 per cent rate increase “almost immediately and forgoing very important capital projects like schools, hospital, bridges and transit and other initiatives right across British Columbia.”

Horgan said the Liberals, which were led by then-premier Christy Clark, allowed the project to “get to the point of no return” and its approval wasn’t based on good public or energy policy.

Phillip said he didn’t buy Horgan’s reasoning for proceeding with the project. He noted the utilities commission confirmed the project was over-budget and Phillip predicted it is likely to balloon as construction continues.

For a party that campaigned on making B.C. more affordable, Phillip said, having “our grandchildren’s grandchildren” pay off the debt to build the dam doesn’t make economic sense.

The reaction to Horgan’s announcement was equally pointed from the B.C. Liberals, saying in a news release the decision ends months of uncertainty for more than 2,000 families “left waiting by the NDP to see if they would have jobs this Christmas.”

Mike Bernier, the Liberal MLA for Peace River-South, said the Horgan government’s decision to have the utilities commission review the project was “needless” and done “solely for political reasons.”

“Today, though, is a great day for the First Nations, communities and businesses that depend on Site C to make a living to support themselves and their families,” Bernier said.

Green leader Andrew Weaver, whose party agreed to a power-sharing agreement with the NDP to topple the Liberals in June, said in a release that his caucus was “extremely disheartened” by the decision. Weaver called it “fiscally reckless” to continue with Site C.

“Our caucus has met with dozens of local governments, First Nations and B.C. companies with viable alternative energy projects,” he said. “As countries across the world embrace small scale distributed renewable energy, this decision keeps B.C. lock in the past and risks foregoing enormous opportunities.”

B.C. Hydro has said the dam is being built to meet future electricity needs in the province and will generate enough energy to power 450,000 homes per year. Horgan said the $10.7 billion cost will be recovered over time from the sale of electricity.