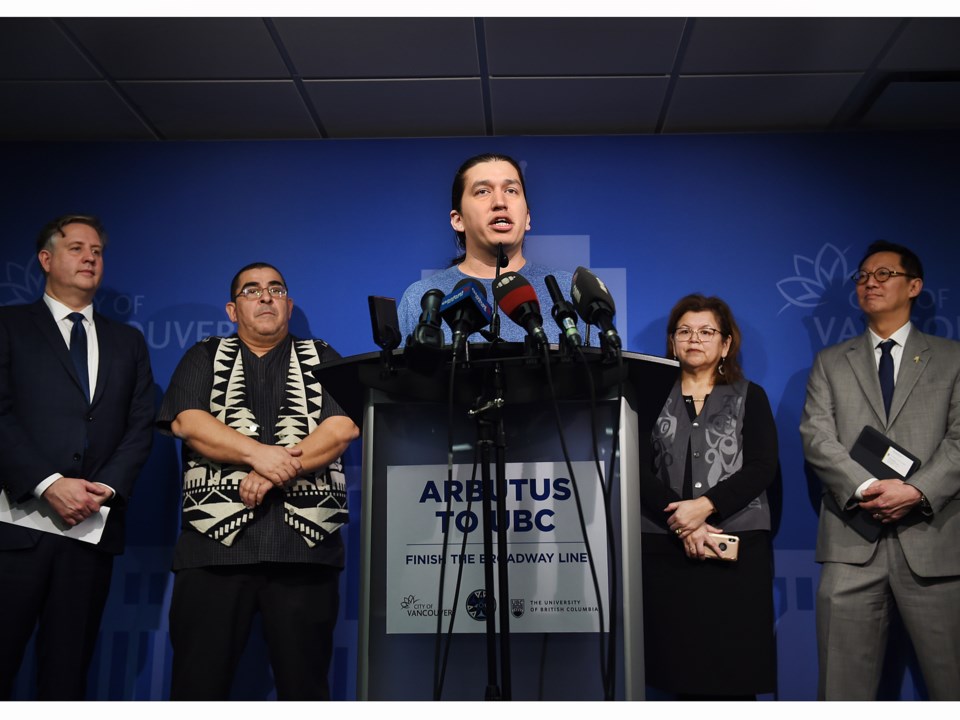 Three local First Nations leaders have joined Mayor Kennedy Stewart and the president of the University of B.C. in a unified plea to have senior governments fund a $4-billion SkyTrain extension to UBC.

“All of our nations collectively and individually are constantly in conversations with the province and the feds on various issues — transit being one of them,” Khelsilem told reporters.

“The city and UBC benefits from the nations actually being involved [in lobbying for a SkyTrain extension] because the nations sometimes have access that UBC or the city might not, and vice-versa.”

The three nations have strong interest in the extension, with their Jericho Lands redevelopment expected to be home to thousands of new residents once the project is built out in the future.

The Musqueam is also currently building a massive residential development on its land in the University Endowment Lands, which will further increase the population near the UBC campus.

The announcement Wednesday formalized what all present at city hall or their organizations have said separately over the years — that extending the Broadway subway from Arbutus Street to UBC is needed to reduce congestion, fight climate change, boost the economy and move people efficiently along the west side corridor.

The estimated cost of the extension is $4 billion, with the mayor expecting 80 per cent of the cost to be split evenly between the federal and provincial governments.

The remaining 20 per cent would come from the region, including TransLink, UBC and the City of Vancouver. The nature of funding, which could include land donations, wouldn’t be decided until senior governments commit to the proposal.

“Really, none of it matters unless there’s a federal and provincial commitment,” said Stewart, who has called several times on Premier John Horgan and Prime Minister Justin Trudeau for the SkyTrain extension.

The mayor, who travels to Ottawa next week to continue his lobbying efforts, said he has no “plan B” if the governments fail to fund the extension. But, he added, that he can be persistent.

“And I intend to be on this one,” said Stewart, acknowledging Vancouver is competing with other Canadian cities who want to build out their transit systems.

Ono said he and 24,000 others who reside on campus are fortunate that they can walk to work or classes, whereas thousands of students and employees travel from around Metro Vancouver to reach UBC.

He said an estimated 27,500 people who work or study at UBC live in communities outside of Vancouver. And when they travel to the university, their mode of transportation — by car or bus — contributes to congestion on the roads, he said.

“Whether they are a second-year biology student who lives with their parents in Surrey, or a childcare worker raising a family in Coquitlam, a cook from Richmond or a quantum materials nuclear physicist from New Westminster, there’s a bit of UBC in every municipality in Metro Vancouver,” Ono said.

Both governments remained non-committal Wednesday on whether they would commit to funding an extension from Arbutus Street to UBC.

Infrastructure Canada referred to the Canada Infrastructure Program in which B.C. “stands to benefit from over $2.6 billion in funding for public transit projects that the province identifies as priority.”

“More specifically, project proposals submitted under [the program] must be identified and prioritized by the Government of British Columbia and then submitted to Infrastructure Canada for funding consideration,” said an emailed statement to the Courier.

“Should the province of British Columbia identify the SkyTrain extension as a priority for funding, it could be eligible under the public transit stream of the [program].”

The federal government also noted the federal gas tax fund is available to municipalities and can be used for transit projects.

In addition, the federal government’s 2019 budget provided $2.2 billion “to address short-term priorities in municipalities through the federal gas tax fund. Vancouver will receive over $3.8 million through the [gas tax fund] that could be used to improve local public transit.”

An emailed statement from the provincial government to the Courier said the government is encouraged to see the collaboration between UBC, Vancouver and the First Nations.

“We understand this project is still in early stages of development and we look forward to learning more about TransLink’s rapid transit proposal as it gets closer to a design concept,” said the statement from the Ministry of Municipal Affairs and Housing.

The extension would complete the yet-to-be-built 5.7-kilometre SkyTrain line from VCC-Clark Station through the Broadway corridor to a new station at Arbutus Street.

Construction is expected to begin this year and finish in 2025.

The City of Vancouver committed $99.8 million.

Five kilometres will be tunnelled below the corridor from Great Northern Way to Arbutus, with an underground connection to the Canada Line at Cambie Street.

Without an extension to UBC, transit riders would have to transfer to B-Line buses, which would follow the current route of the 99 B-Line through Point Grey to campus.

Technical analyses have predicted the buses would be at their practical capacity on the opening day of the VCC-Clark Station to Arbutus SkyTrain line.