For Travis Green, the Canucks getting more goals is about more than just top-six or top-nine 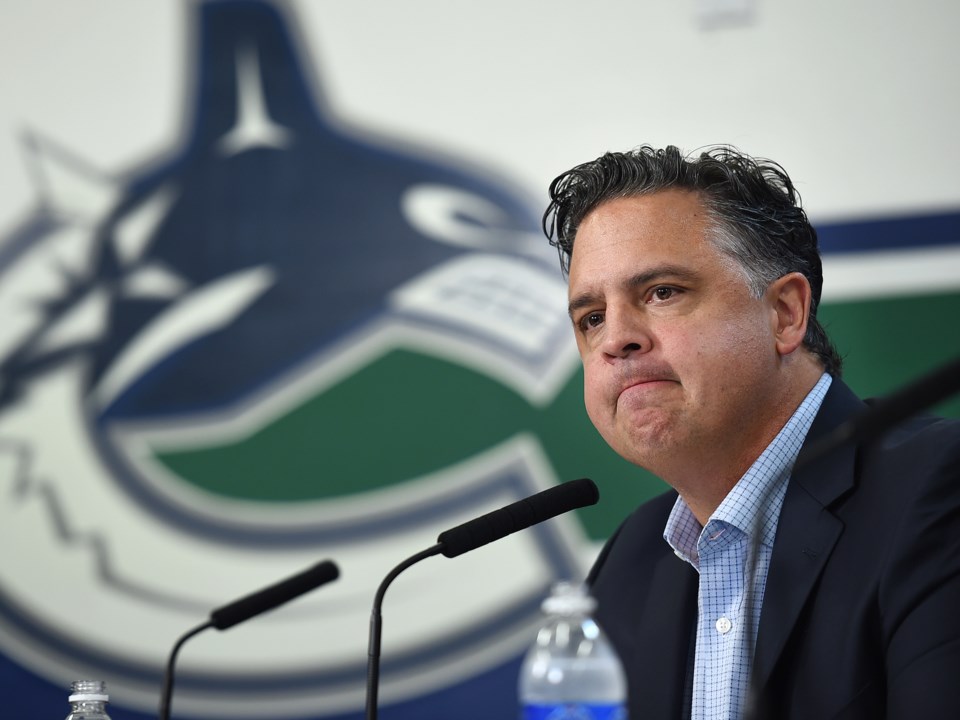 Travis Green talks to the media before the 2019-20 season.Dan Toulgoet / Vancouver Courier

The classic construction of a hockey lineup is simple: you have your first line with your best offensive players, a secondary scoring line, a checking line to play sound defensive hockey, and a grinding fourth line that gets in on the forecheck, hits hard, and maybe drops the gloves every now and then to keep the other team honest.

We can even see a great example of this in the 2010-11 Canucks, the best team in franchise history. The Sedins and Burrows led the way on the first line, while Ryan Kesler scored 41 goals while anchording an excellent second line with Mikael Samuelsson and Mason Raymond. In the bottom-six, the checking line of Manny Malhotra, Jannik Hansen, and Raffi Torres faced tough opponents and defensive zone deployment, and there was also a fourth line.

Over the last few years, Jim Benning has repeatedly hinted at a desire to move away from the top-six/bottom-six dichotomy of his forward group. The phrase “top nine forward” keeps cropping up, and for good reason.

If you look around the NHL, the best teams get scoring throughout their lineup. Instead of depending on two lines to score, then focussing on defence on lines three and four, teams are putting skilled, offensive forwards on the third line and even the fourth line.

The Canucks, if they want to make the playoffs, are going to need more scoring depth. Just three Canucks forwards had more than 15 goals last season — Elias Pettersson, Brock Boeser, and Bo Horvat — and the team finished 26th in the league in scoring. They can’t depend solely on the top-six forwards to do all the scoring; they need a top-nine.

Do they have the personnel for a top-nine with three scoring lines?

“It would be a lot easier if Brock was signed, I think,” joked Jim Benning, attempting to ease the tension of his star winger’s ongoing contract negotiations.

“That’s something that Travis [Green] talks a lot about, is having three lines that contribute in the scoring,” he continued. “I think the additions we made this summer, we have more depth.”

“You said I want three lines that can score, I want four or five,” said Green with a smile. “Doesn’t happen in the NHL a lot.”

Green made it clear that it’s not just about top-six or top-nine — “I think it gets a little bit overblown,” he said about the distinction — but that he wants contributions through the lineup. That goes beyond just having the right players available, but also issues of systems and deployment.

One of the big question marks, however, revolves around Brandon Sutter. While he’s primarily been deployed as a shutdown centre on the third line, playing difficult minutes against tough competition, he seriously struggled in that role last season, at least when he was healthy. He’s had even less success, however, when it comes to creating offence. The Canucks have the wingers for their third line to be a scoring line, but is Sutter the right centre?

“You talked about Sutter and he scored in the past, he’s a guy that can score,” said Green. “He hasn’t always been surrounded with offensive players as well, and he’s been in heavy matchups. When I say score...10 to 15 goals is not a bad number...scoring 10 goals, 15 goals in this league — it’s easier said than done — and when you’re in a heavy matchup role, it’s also a lot harder to score.

“We could probably get more production out of guys if maybe they weren’t always in that role. Now that goes on Bo and Petey: are they capable to play in a matchup role, which changes the dynamic of what the other lines face as well.”

On Wednesday, during an appearance on Sportsnet 650, Sutter talked about the need for scoring throughout the lineup, but also joked about letting the team’s two top stars take the lead.

“We have a group of our top-six guys and then a group of the rest of us that are in the bottom-six,” he said. “Our roles are all going to be a bit different, but I think you look, we have guys that can score goals on every line right now.”

“I think for me, I just want to come back in and do what I’m comfortable with and what I like doing,” he added. “I’m sure there will be a lot of time on the PK and stuff like that, playing against the other team’s better players, and I really cherish that role, and take a lot of pride it in it.

“We’ve got a few guys that are like that on the team and I think we’ll just watch Petey and Boeser score all the goals and the rest of us will do the rest.”

When the team has struggled with depth scoring, that joke might hit a little too close to home. On Thursday, Sutter made it clear that he knows that being a good two-way player means doing more on the offensive side of the ice.

“It’s been my role pretty much most of my career, to be a good two-way player,” he said. “I think you want to make sure you’re doing the right things defensively, but to be really a threat, you want to be able to create offense too.”

In 2016-17, Sutter scored 17 goals with the Canucks, several of them while playing on the wing with Daniel and Henrik Sedin. His career high was 21 goals with the Pittsburgh Penguins the season before joining the Canucks.

“I think Sutter is capable of scoring more than he has and I hope he has a good season,” said Green. “I think he’s excited to go, he feels healthy, and he wants to help any way he can. And that’s the great thing about Sutts, he just wants to win and contribute.”

The Canucks also believe they’ll get more offence throughout their lineup because the changes they made to their lineup will change the way they play.

“I think last year we didn’t get to the net. We weren’t big and strong enough to get to the net,” said Benning. “In signing [Micheal] Ferland and trading for J.T. Miller, these are bigger body guys that are going to get to the net. When we talk to our analytics people and we watch video, we need to score more dirty goals this year, like deflections, rebound goals.”

For Green, getting those contributions throughout the lineup can come in different ways and, in that, he falls back on the top-six/bottom-six language. He expects that his bottom-six forwards might score more dirty goals.

“I think personnel and players are all part of it,” said Green, “but how you play, like Jim said, how your defencemen activate in the rush, how they shoot, how they get pucks to the net, also affects how guys score. It's not just the first and second-line players, it's the third and fourth-line guys that maybe go to the net sometimes a little bit harder, and there's more rebounds for them to score goals.”

Will the new additions to the lineup, along with improvements from their young stars, give the Canucks the depth scoring they need to make the playoffs?

“I think we're better equipped to score more goals now,” said Green. “We’ve got to score more if we want to improve, but we’ve got to defend better as well. And they’re both connected. If you do better in your own zone, you’re going to have a lot more time in the other zone.”