In an era when most people find their entertainment in front of a video screen, Shannon Lentz finds a certain appeal in dice, little wooden blocks and cardboard.
Mar 26, 2014 10:35 AM By: Lisa Smedman 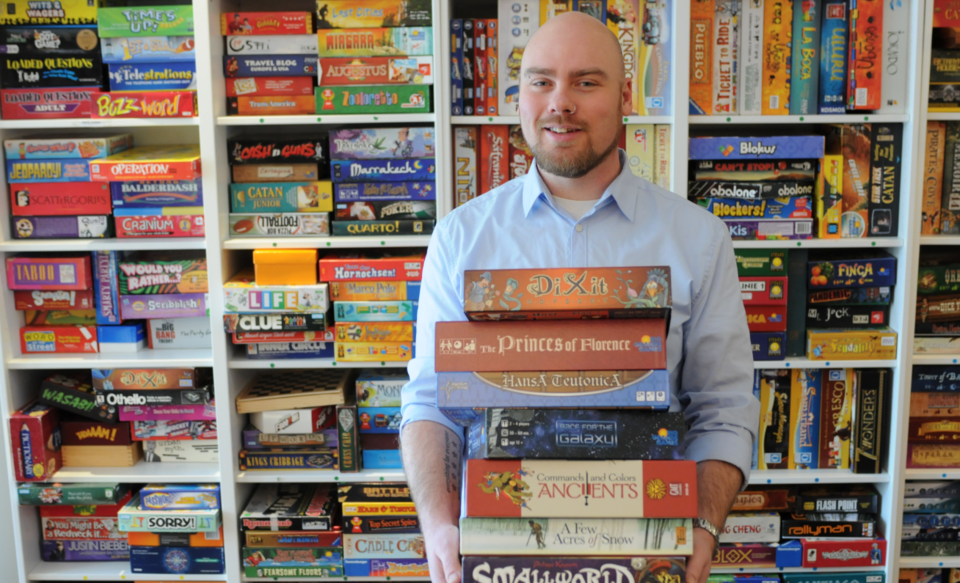 Shannon Lentz is hosting a new board game convention in Burnaby May 31-June 1. Photo: Dan Toulgoet

In an era when most people find their entertainment in front of a video screen, Shannon Lentz finds a certain appeal in dice, little wooden blocks and cardboard.

“[Board gaming] is very tactile, pushing around pieces of cardboard or wood,” says Lentz. “It feels different from a video game. It’s more tangible, more real. And it’s very social. You’re sitting around a table with a group of people. It’s a great way to meet people.”

That’s why he’s inviting a few hundred fellow board game geeks to his personal board game party: the Terminal City Tabletop Convention, which runs May 31 to June 1.

Lentz, a chemist by profession, got into board gaming in a big way a decade ago. As it was for so many others, the gateway game was Settlers of Catan, a German board game whose 18 million units sold rival the sales figures of popular video games.

“Once you play a game like that... this whole world was open. All these possibilities — all these different types of games.”

In 2010, Lentz attended GottaCon, a board gaming convention in Victoria that drew 3,000 attendees this year. Wanting to do something similar in Vancouver, he rented the Firefighters Banquet and Conference Centre in Burnaby, putting close to $2,000 of his own money on the line.

Now he’s hoping the gamers will show up.

There’s lots to draw them. The two-day convention runs from 10 a.m. to midnight on the Saturday, and from 10 a.m. to 6 p.m. on the following Sunday. There will be board games, roleplaying games like Dungeons & Dragons and Pathfinder, and collectable card games (a Pokemon tournament on Saturday and a Yu-gi-oh tournament on Sunday). Comic book writer Kurtis Weibe will guest host the RPG Fiasco, and improv comedy troupe The Fictionals will perform a gaming-inspired show on Saturday night that will also include cast members of Standard Action, a web-based comedy series based on roleplaying gaming tropes.

The convention will also feature Proto-Alley, a place where local designers can showcase their original board and card games.

Gaming has come a long way since Lentz was a kid. He recalls playing days-long games of Risk, and being prohibited from playing Dungeons & Dragons by his parents, who thought the roleplaying game was satanic. Now his board game collection fills his West End home.

“Like many people who start gaming, I started buying way too many games, tons of games, more than you can actually play,” says Lentz.

A trend he’s noticed in recent decades is that the top board game designers have become household names — at least among gaming geeks.

“Back in the day, you didn’t know who designed what,” says Lentz. “Now a lot of people in the hobby follow designers. Whenever they have a new game out, they get all excited.”

For Lentz, there’s just something about sitting across a table from an opponent, rolling dice. It’s a passion increasing numbers of people share, with game conventions springing up across the country — not to mention local venues like restaurants Storm Crow Tavern and Pizzeria Ludica, each of which feature extensive libraries of games patrons can sit down and play.

“I think the rise of board gaming is not so much due to acceptance,” says Lentz. “It’s more due to people getting exposed to games, and they’re like, ‘This is a lot of fun. It’s something I can do instead of just watching a movie with my friends.”