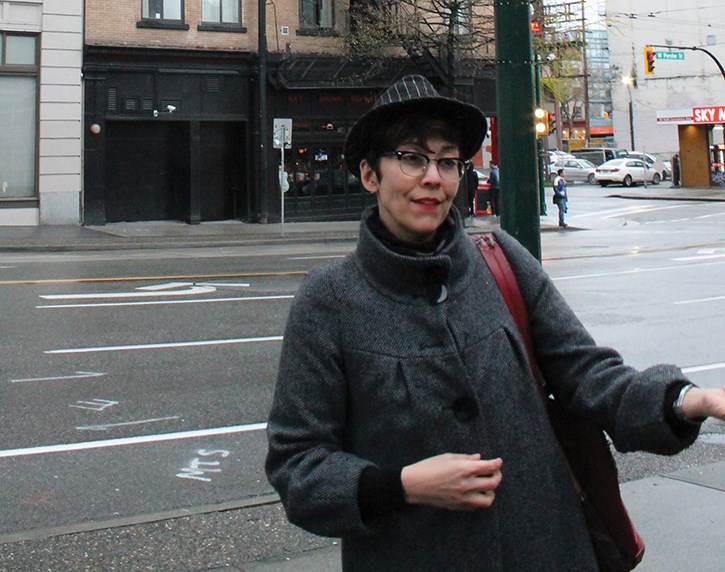 Stories of corrupt politicians, mobsters and back alley saloons colour the walking tour about prohibition conducted by Forbidden Vancouver.

Gisele Da Silva, appropriately wearing a fedora, takes people back to a time when Vancouver was full of showgirls, suited men and smoke-filled skies. A simpler time, some could imagine, but also a more dangerous one.

In 1917 prohibition came into effect in British Columbia. With encouragement from the business elite and the Christian Temperance Union, BC voted for prohibition after a referendum. Over the next several years, prominent figures like corrupt mayor L.D. Taylor, mobster Joe Celona and crooked prohibition commissioner Walter Findlay reaped the benefits of the illegal liquor trade, while many people were criminally punished for indulging their cravings. After years of corruption, half-hearted police efforts and fed up citizens, prohibition was voted out in 1920, and in 1921 liquor flowed free again. But the story is much more complicated. The time in between the referendums is full of scandal, luxury, and the dirty laundry of Vancouver’s past.

The tour, which starts in Cathedral Square and ends in Gastown, gives us a glimpse into a Vancouver when illegal boozing and shoddy whisky joints were seen all over the city. With an animated voice and lively demeanor, Da Silva leads the group around downtown Vancouver pointing out important land marks to the prohibition era and what happened there.

Whilst pointing out illegal hotspots and spinning tales about beautiful burlesque dancers, the tour encourages all the attendees to be “reporters.” Notepads in hand, they are told to listen to the facts to solve the mysteries of prohibition. Da Silva poses as a reporter from World News who was fired from the job for trying to uncover the dirty details surrounded the illegal liquor trade. Likely not an uncommon occurance for Vancouver newspapers at that time. Given tasks and clues, the tour keeps the “reporters” involved and entertained for the excursion.

Da Silva points out a back alley, which would have housed a blind pig, or saloon, places where you would need a secret knock and a cautious attitude. On Abbott Street, she brings to life a vivid scene at The Lotus Hotel, the location of a “private club” where the privileged would go to indulge – police, mayors and judges included. The Cambie Bar & Grill, one of the last stops on the tour, is said to be the location of the city’s first “beer parlour” after the prohibition ended, which still houses relics from when it opened.

Prohibition was a time where dealing in alcohol could mean years on a chain gang – hauling stone in a quarry, building stone roads – or time behind bars. You couldn’t legally manufacture liquor to sell or distribute and it was not an offence taken lightly if you were caught. The only thing you do could do safely was make your own alcohol to drink at home. Until prohibition, Vancouverites were accustomed to a life where booze and bars were commonplace all over town. Saloons covered the city, in hotels, on the streets, and they were usually filled with people. A small city then, only 20,000 people, bourbon and whisky soused over 60 saloons.

Exclusive private clubs allowed the rich and privileged to drink – technically speaking – legally. At these private clubs, you could bring your own homemade liquor to drink. It was legal to drink in private during the prohibition, so as long as you were a member of the private club, no problem, you just had to bring your own booze. But any saloon “worth its weight in whisky,” said Da Silva, would have liquor there, ready to buy. Bartenders, burlesque dancers, jazz bands and clouds of cigarette smoke would fill these clubs, along with those who had the means to back it.

Like any other legal activity, there were loopholes. Besides being able to drink in a private club or at home, you could drink with a prescription. Da Silva talks of a time where a gallon of whisky or a case of champagne would be prescribed; from a hangnail to an under active liver, all you had to do was call up the doctor, and you could be boozing away. During the years of the prohibition Vancouver housed 400,000 people and over 385,000 prescriptions were filled for alcohol; a number that implies enough alcohol for every man, women and every some children. Churches of course had wine, so they too could bring in casks to serve during Sunday mass. The problem was that almost as much was going in the front door would be bootlegged out the back.

So did prohibition stop folks from drinking? No. It just forced them to be more creative.

Aside from illuminating a time when Vancouver ran dry, the tour gives you a chance to see the city, from back alleys to noteworthy buildings, cobblestone roads and monuments. ForbiddenVancouver.ca