Another life, another chapter, awaits Tony Parsons , media figure and Vancouver icon. Parsons is retiring from the supper broadcast for CBC Vancouver , although this may not spell the end of his career.
Dec 22, 2013 9:00 PM By: Vancouver Courier Staff 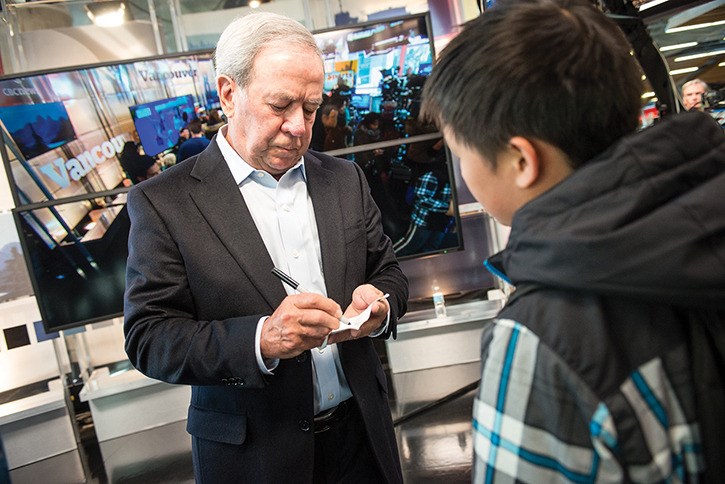 Parsons is retiring from the supper broadcast for CBC Vancouver, although this may not spell the end of his career. Im keeping my options open, Parsons said in our interview. Its an apt phrase coming from the same man who declared his retirement from his long career with Global three years ago.

While he may be considered the quintessential Canadian, Parsons was actually born and raised in London, followed by a move to Ontario as a young man. By the middle of the 1970s, Parsons had already established himself as an authoritative voice in broadcast news. Beginning his career as a country music station DJ, he had climbed the rungs on air, and in 1975 Parsons flew to Vancouver to begin his storied career at BCTV, which would later be known as Global.

Parsons has seen the news format mutate over the decades, witnessing the emergence of 24-hour news broadcasts, the near death of print, and the advent of blogs and online news sources. Its a fragmented audience now the pie is much smaller. The sheer number of competing news resources has spelled the end, or at least the change, of the supper time TV news. People like me may not exist in 10 years time, Parsons remarked. The CBC is a national institution, but it could well be different in the future.

After his last broadcast on December 20, Parsons is returning to his weekend home in Victoria, where hell assume full-time residence. In the past few years, he has juggled anchor duties in Vancouver and then flying via helicopter to Victoria to anchor CHEK-TVs broadcast.

Parsons is looking forward to the permanent move. Some people talk about island fever, but Ive never experienced it. The mild weather of Victoria will support his fondness for golf, but he still maintains a love for Vancouver. This is a vibrant, growing part of the country. Vancouver has overcome its geographic boundaries, and now everyone wants to be here. You dont meet many Vancouverites who have moved out of the city.

Parsons is leaving Vancouver, but his impact is still present in the city. Media personalities are rare enough, and in the age where C-list celebrities get their own cable shows, we may never have genuine icons like Parsons again.