Vancouver Heritage Foundation tour runs June 7
May 14, 2015 3:23 PM By: Naoibh O’Connor
Previous Next
1 / 1 The historic Queen Charlotte building in Vancouver’s West End is part of the Heritage House tour. Pictured outside the building is artist/author/historian Michael Kluckner and Daryl Nelson, a long-time resident of the Queen Charlotte. Nelson also sits on the VHF board. photo Dan Toulgoet
Expand
Previous Next

A vintage light fixture, with parrots painted onto the amber-coloured glass, hangs from the ceiling in the entrance of Kate Swatek’s condo located in the Queen Charlotte building in Vancouver’s West End.

The fixture, which is original to the suite, once hung in the kitchen, said Swatek. She’s lived in the building, located on Nicola Street at Pendrell, since 1991. 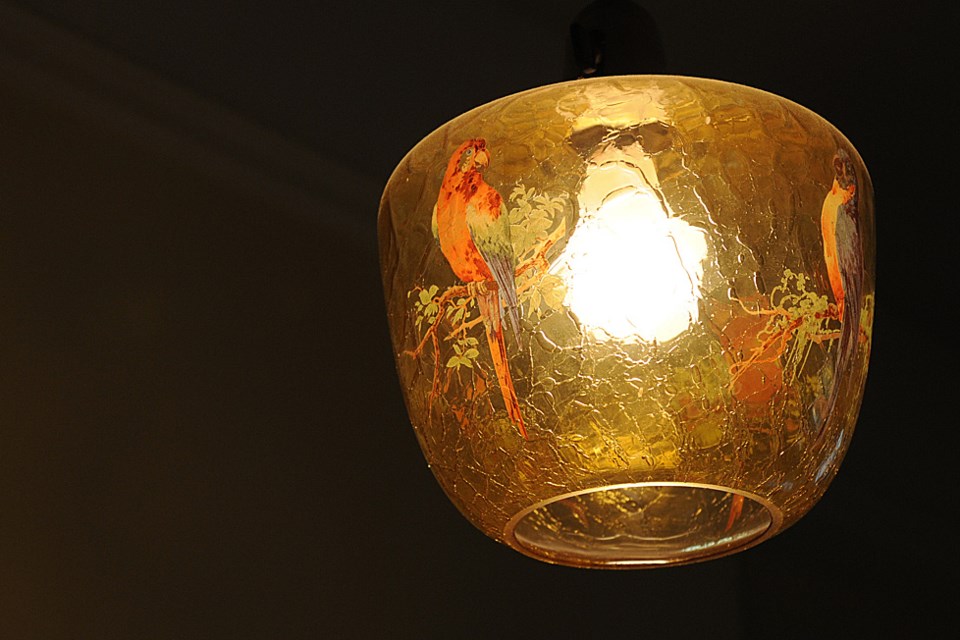 The decorative item is part of the appeal of the spacious and light-filled 1,069-square-foot condo, which is one of four suites in the Queen Charlotte being featured in Vancouver Heritage Foundation’s Heritage House tour this year.

Constructed in 1928, the five-storey building’s historic charm is visible elsewhere in Swatek’s apartment — in the original wood floors, in wall sconces, in wooden doors and mouldings. It features an original ceiling fixture in the living room, as well as an antique electric fireplace.

“It’s got the original false coals. We’ve unplugged it because it has some wiring problems, but there’s even a light that you can switch on and when it was heating — because the element still works — a little fan would make it look like they were glowing,” she said.

Downstairs, the lobby offers other reminders of the past. Long-time resident Daryl Nelson, who sits on the VHF board and whose unit will be part of the tour, noted the basket-weave pattern on the wood floors. When the floors in

Nelson’s condo were refinished in the mid-1980s he was told the lobby’s intricately designed, quarter-inch oak floors were the best available in 1928.

“Obviously, they tried to make this as high-end as possible,” he said.

Nelson said the lobby was originally about 15 to 20 feet wider and acted as a reception lounge, but at some point it was walled-in to make a narrower entrance. The extra space was added to the caretaker’s suite.

The 25-unit building was converted from rental apartments into condominiums in 1979.

Michael Kluckner, an author, artist and historian, calls the Queen Charlotte one of the best examples of “a generation of quite gracious apartment buildings.”

“In the case of this one, it began as a kind of apartment-hotel, which was a fairly new concept at that time. It’s in a period where Vancouver was briefly very prosperous and in the 1920s it was really a modern time of cars, radios, entertainment, and people looking at new ways of doing things and not being so encumbered as they had been in previous generations by great big homes that required servants to run,” he said.

“So it’s partly [important] from that point of view and it’s important because of the builder — Charles Bentall of Dominion Construction, who had a huge impact on the skyline of Vancouver and successor companies to this day.”

Outside aerials allowed residents to get good radio reception — a state-of-the-art feature in those days.

Kluckner highlighted the quality of the building’s design and said the building says something about the evolution of the city, considering it’s been adaptively re-used by being converted into condos and it’s also been well maintained for 87 years.

“So it’s really been part of the city. It really indicates that things can get old gracefully and get better as they get old,” he said.

“Our theme this year is very much the diversity of different kinds of heritage homes that are out there,” she explained. “We’ve not often had an apartment building on the tour but we’re really excited to be able to do that. We also have another apartment building, but it’s a converted industrial building, so it’s a contrast to this. The others are more traditional homes of various sizes and ages.”

For details on the Heritage House tour, go to vancouverheritagefoundation.org. The tour runs from 10 a.m. to 5 p.m., June 7.