A kayaker got a little wetter than expected while out on a recent trip in Port Moody, when a playful harbour seal bumped the boat and sent it tipping into the water.
Aug 3, 2019 9:32 AM By: Elisia Seeber 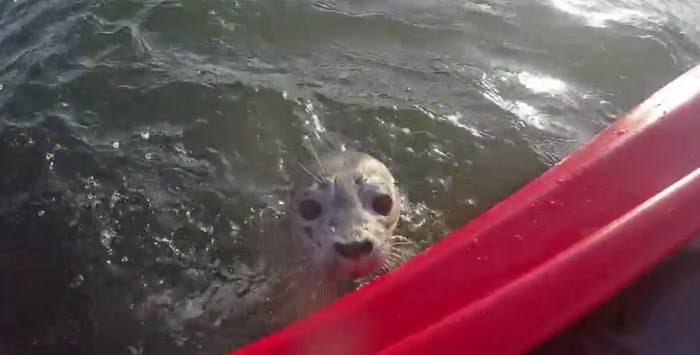 A kayaker got a little wetter than expected while out on a recent trip in Port Moody, when a playful harbour seal bumped the boat and sent it tipping into the water.

The man was kayaking at Rocky Point when two seals popped up to say hello, and he managed to capture the moment on video.

The short 27-second clip posted to Reddit shows the seals looking rather curiously at the kayak… One seal then jumps up for a closer look and knocks the kayak, causing it to tip over and send the man into the water.

Reddit user D-Ro posted the video to the Vancouver sub-reddit on Wednesday, mistakenly calling the inquisitive creatures sea lions. Vancouver Is Awesome reached out to D-Ro about the encounter but he is yet to respond.

In posts to fellow Redditors he mentioned that he did not believe it was an attack.

“I saw\heard no other signs of aggression,” he wrote on Reddit. “I was more worried for them. I didn’t want to put my paddle near them and look aggressive.”

While it seems like a cute animal encounter and the kayaker wasn’t injured, Vancouver Aquarium Marine Mammal Rescue Centre wants to send a friendly reminder to water users to keep a safe distance away from marine wildlife.

V.I.A. spoke to Emily Johnson, the centre’s assistant manager, who said if the animal becomes aware of your presence, you are too close.

“If people are observing animals, we recommend they stay back so they’re not interfering with what the animal is doing,” she said.

“From my perspective, if I had been on that kayak I would have moved away to discourage those animals from approaching. Their [kayaker] presence was obviously close enough that the animal knew they were there and came to investigate.”

Johnson said harbour seals in particular give off warning signs to humans to let them know they feel they’re too close, including lifting their front flipper in a wave motion.

“They will also slap their abdomen with their front flipper as an indication that you’re too close,” Johnson said.

Plus, they also bite. Johnson warned that seal bites could result in some pretty nasty infections.

“Harbour seals have a wonderful set of teeth and they are wild animals, so they will use them when they feel threatened,” Johnson said.

“People need to be aware that they are taking risks by interacting with them. They do have the capability of doing quite a bit of damage.”

Harbour seals generally like areas with log booms, sandy beaches, rocky outcrops and shorelines and docks – anywhere they can haul-out on.

Johnston also wanted to make it clear that people should always call the rescue centre first if they saw an animal they believed to be in harm or distress.

“Keep a safe distance, don’t disturb the animal, quietly observe and call the centre,” she said.