After an impressive NHL debut last season and a dominant preseason, Brock Boeser has sat in the press box for both games of the young NHL season. It’s a frustrating sight for Canucks fans eager to see the Canucks’ best young prospect play.
Oct 11, 2017 12:55 PM By: Daniel Wagner 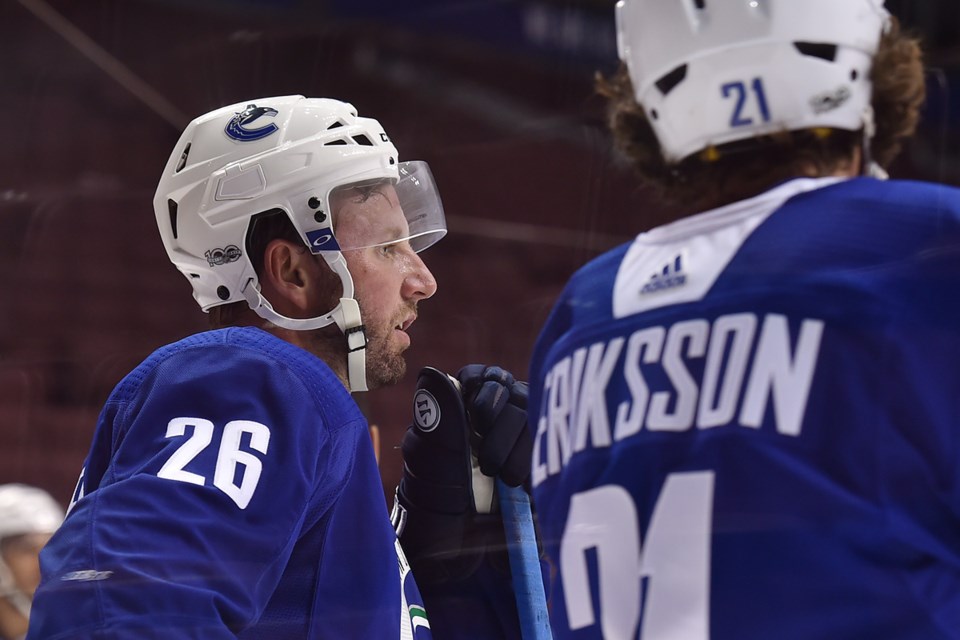 After an impressive NHL debut last season and a dominant preseason, Brock Boeser has sat in the press box for both games of the young NHL season. It’s a frustrating sight for Canucks fans eager to see the Canucks’ best young prospect play.

Meanwhile, in Utica on the Canucks’ farm team, the Comets have also played two games. Sitting in the press box for both games? Anton Rodin, the MVP of the Swedish Hockey League two years ago, and Patrick Wiercioch, who has been an NHL regular for the last five seasons. Both are potential call-ups for the Canucks this season, but neither has been able to get into a game.

The issue, in both cases, is too many veteran players.

For the Comets, it’s literally in the AHL rules that they can’t dress more than six veteran players, as explained by Jeremy Davis over at Canucks Army. Simply put, the AHL is meant to be a developmental league for the NHL, so they want as many young, up-and-coming players in the lineup as possible.

The Comets have just one player on the roster that is considered “veteran exempt”: Reid Boucher. The other veterans are Patrick Wiercioch, Anton Rodin, Darren Archibald, Michael Chaput, Jayson Megna, Carter Bancks, Wacey Hamilton, and Jaime Sifers. Only five of those players can play on any given night.

So far, Wiercioch, Rodin, and Sifers have been the odd men out. That is particularly tough for Rodin, who has played just six professional hockey games since he underwent knee surgery back in January, 2016.

It’s easy to see how this might be remedied: the Comets simply need fewer veterans. The easiest way to accomplish that would be to have one or two of them up with the Canucks instead. Unfortunately, the Canucks have the same problem.

Jim Benning loaded up his plate on the first day of free agency, replacing five outgoing veterans with five new ones: Sam Gagner, Alexander Burmistrov, Michael Del Zotto, Patrick Wiercioch, and Anders Nilsson. That seemed to fill the Canucks up, but Benning couldn’t resist going back to the free agency buffet for dessert, adding Thomas Vanek late in the summer.

Immediately when Vanek was signed, it called into question Boeser’s spot on the team.

Without Vanek, Boeser would almost certainly have a spot in the Canucks lineup sewn up. Adding Vanek fills the hole in the top-six that Boeser was previously pencilled into.

While Boeser still made the roster out of camp and will get playing time, is there any doubt that he’d be in the lineup if Vanek signed elsewhere? And, if Vanek wasn’t on the Canucks, that would open a roster spot for a veteran from the Comets. Perhaps Rodin would have made the team or Darren Archibald would have been offered an NHL contract.

That would ease the situation in Utica and make it easier for the Canucks’ youth to get into the lineup in Vancouver.

What’s done is done, however, and Vanek is a Canuck. As much as some fans might want him to do so, Travis Green is not going to scratch Vanek. Furthermore, he shouldn’t scratch Vanek; whether the goal is to win now or develop for the future, playing Vanek accomplishes both goals. He can create offence on a team that has struggled to do so and every point he puts up increases his trade value.

So, to get Boeser into the lineup, someone else has to sit, such as Jake Virtanen, another young player that should be in the lineup, or Alexander Burmistrov, who has performed admirably in the first two games of the season.

Judging from the practice lines on Wednesday, one of Virtanen or Burmistrov is likely to sit on Thursday so that Boeser can play alongside Bo Horvat and Sven Baertschi. This is what fans have been asking for and what worked at the end of last season, but it’s a shame that Virtanen or Burmistrov will have to sit to make it happen.