Potential candidates aligned with Bremner leaving NPA because of board’s decision to reject Bremner’s bid for mayor
May 9, 2018 12:07 PM By: Mike Howell 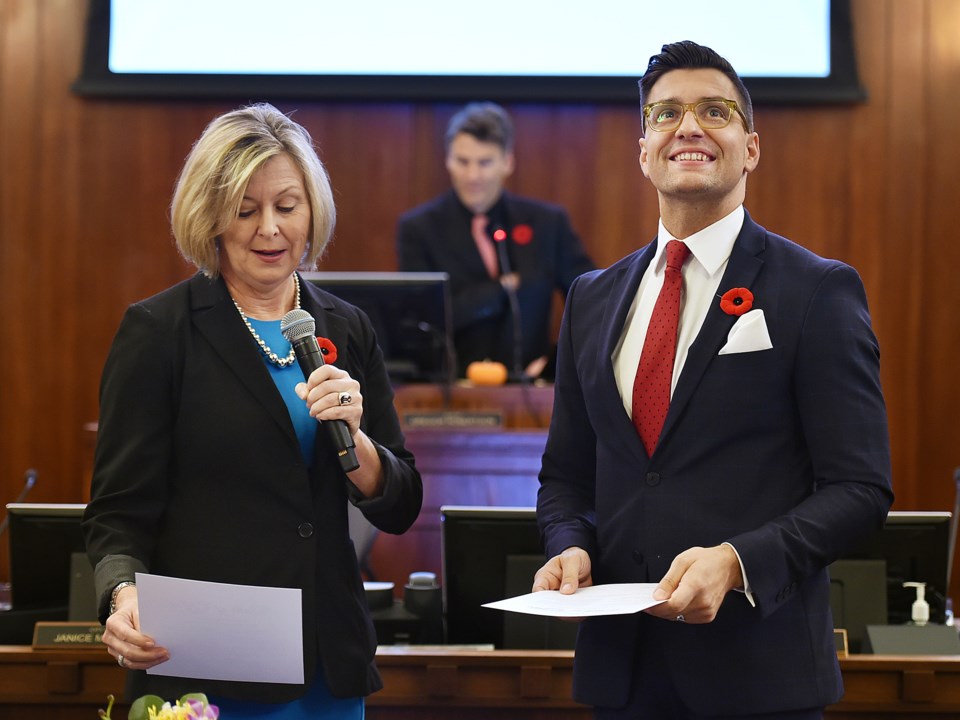 NPA Coun. Hector Bremner, who as elected last October in a byelection, says he will seek re-election this fall but won’t say whether he will stick with his party. Photo Dan Toulgoet

Non-Partisan Association city councillor Hector Bremner says he will seek re-election in this fall’s municipal election in Vancouver despite being rejected Monday by his party as a potential mayoral candidate.

But the rookie councillor, who won a byelection last October, would not say whether he will stick with his party, run as an independent for mayor or council, or stay the course and campaign with the NPA to secure his council seat.

He also wouldn’t say whether he will instruct any of the 2,000 party members he claims to have signed up to support one of the three confirmed nominees—John Coupar, Glen Chernen and Ken Sim--in the race to represent the NPA as its mayoral candidate.

“I’m experienced enough to know that you can’t just react,” Bremner told the Courier Wednesday. “I think you’ve got to give it some time. We have to understand what’s gone on here and what [my supporters] feel we should do, and where we should go.”

His comments are in reference to the NPA board’s decision to not approve his application to become one of the party’s mayoral nominees. The board based its decision on the screening of Bremner by its “green light committee,” which is charged with vetting potential candidates.

Gregory Baker, NPA president, said the committee had “serious reservations” about Bremner’s bid and articulated those to the board. Baker wouldn’t disclose the concerns but noted each potential candidate is vetted on a series of qualities, including integrity, intelligence, interpersonal skills, leadership ability, communication skills and an understanding of municipal government.

The green light committee also assesses whether a prospective candidate is likely to encounter any real or perceived conflicts of interest, and whether such conflicts would impair their ability to act as a public official.

“In particular, if an elected official must frequently abstain from decisions due to real or perceived conflicts of interest their effectiveness as an elected official will be significantly impaired,” according to the NPA’s terms of reference for candidate selection.

Bremner said he was given no reason for being rejected as a prospective mayoral candidate. But he acknowledged a formal complaint lodged by an NPA member to city hall about his work as vice-president of public affairs for the Pace Group could have been a factor.

“I think it was part of strategy to justify this,” he said, referring to Raza Mirza’s complaint accusing Bremner of conflict-of-interest related to Pace’s work with such developers as the Aquilini Investment Group.

In particular, Mirza pointed to council’s discussion in January regarding the Northeast False Creek plan and viaducts replacement project. Bremner was present for the discussion but council didn’t vote on the proposals until Feb. 13, at which time Bremner opposed much of the plans.

Council voted on 14 separate recommendations and amendments to approve the plans, with Bremner and fellow NPA councillors Melissa De Genova and George Affleck arguing unsuccessfully to defer a vote until more consultation was done with the public.

Mirza’s complaint prompted Mayor Gregor Robertson to appoint lawyer Henry Wood to investigate the allegation under the city’s code of conduct policy. Bremner called the accusations “frivolous” and said his lawyer is confident the case will be dismissed.

“The reality is, I don’t work for developers, I’m not a lobbyist and even if I was, there’s nothing actually wrong with that,” he said, noting he has declared a conflict in council chamber when warranted. “There’s nothing untoward about my profession or anything I’ve ever done.”

He said there has been a concerted effort from others within his party to discredit him. He wouldn’t name names but noted the board appointed new members after its annual general meeting late last year, following Bremner’s Oct. 14 byelection victory.

He said some of the new members at one time belonged to parties Vancouver First and the Cedar Party, which ran against the NPA in the 2014 election. One of the NPA’s mayoral nominees, Glen Chernen, was a co-founder of the Cedar Party and it is no secret that he and Bremner have had their disagreements.

Chernen told the Courier Wednesday that he wasn’t at the board meeting Monday and doesn’t know why Bremner was not given the green light to compete in the party’s mayoral nominee race May 29.

Meanwhile, the board’s decision to reject Bremner has created waves with prospective NPA council candidates who had aligned themselves with Bremner and his anticipated run for mayor. Adrian Crook and Scott de Lange Boom both announced they will no longer seek a council nomination with the party.

Crook, via Twitter: “With Bremner out, the likely NPA mayoral candidate is no longer someone I support as a progressive, pro-housing candidate. I won’t be seeking an NPA nomination, for this reason. However, I’m not ending my campaign for city council.”

de Lange Boom, via Twitter: “One board member strongly implied to me that supporting Hector Bremner for mayor would limit my future with the party. The NPA promised an open and transparent nomination process and has delivered the opposite.”