Henrik Sedin is literally playing his ass off 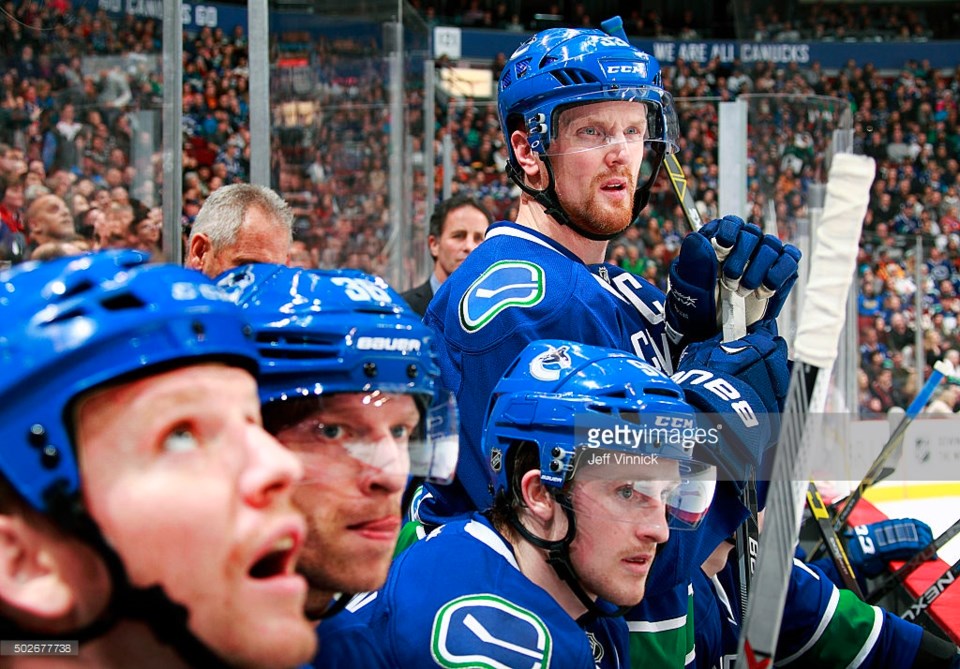 Henrik Sedin is hurt. We can be pretty sure of this. On Saturday, the Canucks' captain spent the evening standing at the Vancouver bench and, considering the bodies missing from it (not to mention Henrik's standing, by which I mean his lofty position as captain, not his actual standing), we can safely assume it wasn't because there were no seats left. We're not talking about the Expo Line after a home game here.

And now, after spending two days presumably sleeping on his feet like Bender Bending Rodriguez, Henrik will be back in the lineup once again to stand up to the Los Angeles Kings, reports Dan Murphy:

What is ailing Henrik? Consider: with 33 points in 35 games, he's 11th in NHL scoring, and 11 points clear of the next Canuck. He's carrying this team. The Canucks have just two wins this season when Henrik is held off the scoresheet. Which leads me to my theory: he's literally playing his ass off. Can't sit down without it.

This is some tough tough toughness we're witnessing here. Leadership too, and at a crucial time. Despite failing to win three in a row all season long, the Canucks are still in the playoff picture. They may not look like a playoff team, but alas, this is yet another instance where the eye test is bested by the numbers: thanks to the haplessness of the Pacific Division, they're in the playoffs. (Sidenote: a good way to reconcile the eye test and the numbers: use your eye(s) to look at the numbers.)

The Canucks could still go to the dance. Bo Horvat could start scoring. He appears to have found some chemistry with Radim Vrbata and Sven Baertschi, meaning the Canucks are flirting with the idea of a second line. Jared McCann could find another gear mid-season, as skilled rookies often do. Same for Ben Hutton. A lot could still happen to transform the Canucks into a competitive team down the stretch, but it'll all be for naught if they let the season slip away now, during this rash of injuries. The team can ill afford to lose Henrik if they hope to keep pace.

And they do hope to keep pace. Henrik's continued presence in the lineup sends a strong message to both his teammates and the fans: the Canucks aren't tanking. We can talk about whether or not the Canucks should be tanking. (My opinion: they shouldn't.)

But they're not tanking. Were they, Henrik Sedin would probably be on the IR right now. Instead, he's in the lineup, busting his busted ass to keep Vancouver above water. From The Province:

Desjardins was asked if Sedin was getting in his way on the bench, blocking his view with all the standing. Desjardins chuckled and said, “I was going to ask him to sit down.”

“He understands where we are,” Desjardins continued, taking a more serious tone as he pointed to the Canucks’ battle for a playoff spot, “and he understands we have to get some momentum.”

Tough to get much momentum when you're sitting down.