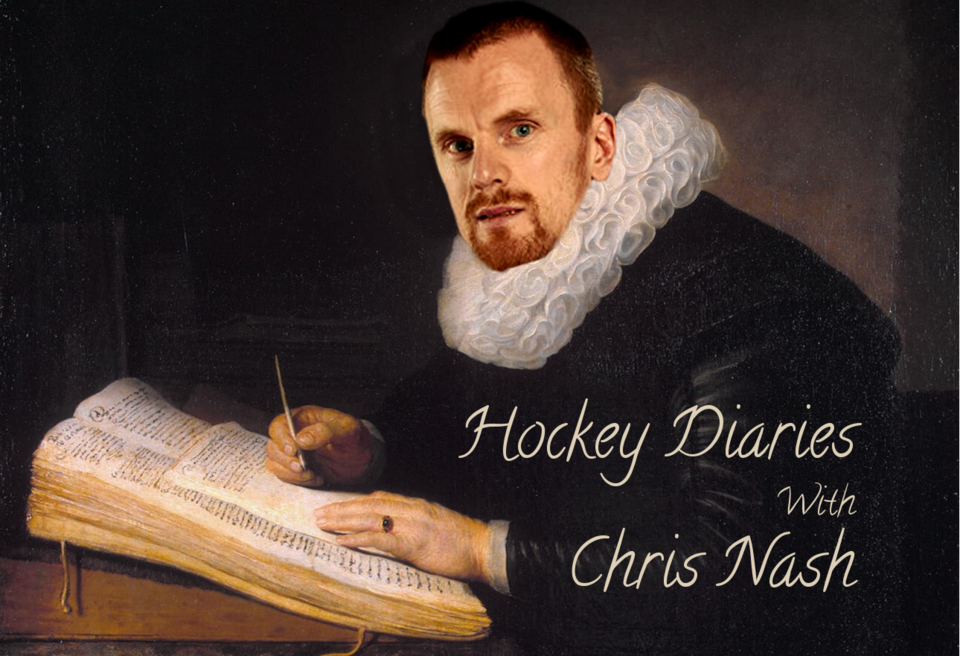 If you enjoyed the recent contributions of guest poster Chris Nash as much as we did, you'll be happy to know that he'll be contributing a new column entitled Hockey Diaries. (Note that Nash doesn't actually write anything, he simply breaks into the multi-million-dollar Yaletown homes of various Canucks, and pilfers an entertaining selection of their innermost thoughts.) Enjoy!

Yet why have I felt a range of emotions, lo these restless nights? Why do I frequent the training quarters before daybreak, while my fellow teammates slumber? Why do I laugh until I cry, and cry until I sweat, leaving a blended stream of joy and sorrow to cycle endlessly on the treadmill beneath my feet?

Brother Henrik's night of triumph was glorious. Many watched it, some felt it, few understood it. But I was there. In fact, I gave it to him. He is my brother, my flesh and blood, and I fed him. I feed all of them, often literally.

I found myself visiting Children's Hospital recently, a sure way to assuage my melancholy. I had prepared a succulent feast of meatballs. I purchased enough meatballs to fill the entire children’s wing. It cost me two million dollars, but it was worth it. I thought the little angels would be thrilled to see me, but their souls were dark. Something had twisted them into little demons. Worse still, they refused my meatballs. One by one, they rolled them toward the door, singing a haunting tune that still echoes off the walls of my skull:

"We got to mingle with Henrik himself
He baked us fresh smördegspaj pies
So take back your meatballs and take back your wealth
Take off your Henrik disguise!"

That was it: the final straw in a life besieged by straws. For a brief spell, my heart’s horrors danced before my eyes. Being passed over for the Captaincy… being pummeled by Duncan Keith… sharing a line with Jayson Megna. It was almost too much to bear. Ask any man the difference between 69 and 100 and he will answer 31. But ask me the difference between 969 and 1,000 and I will tell you it is further than the arctic and ten times as cold.

But I will not submit; I will not let this winter wind freeze me. I will be reborn - a blazing phoenix that burns through the wintry chill. I am coming for you, my wombmate. There will be an ascension, and it will begin with a capital A.