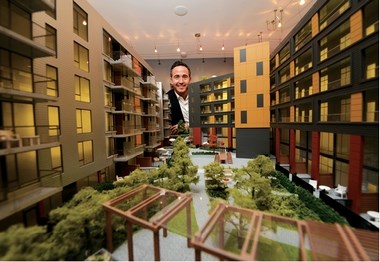 Vancouver city planners vow that Onni’s plan to build 209 condominiums in the largely industrial False Creek Flats will not spark a housing frenzy on what many view as a warehouse and distribution area.

Instead, Onni’s two-building Canvas development, which will launch pre-sales later this month, is the exception, City of Vancouver general manager of planning Brian Jackson stressed to Business in Vancouver.

“There’s no permission for any further residential other than what Onni has,” Jackson said.

Thanks to Metro Vancouver’s two-year-old regional growth strategy, any change in zoning on the flats will require more than just Vancouver city council approval. Converting what is mostly industrial land to other uses would also require regional approval.

“We’re looking at this as being primarily a jobs area,” said Jackson.

He added that city staff are preparing land-use and transportation plans for the area, which is bounded by Clark Drive, Great Northern Way, Main Street and Prior Street.

They will present that plan to council next year, when council considers approving tearing down the Georgia and Dunsmuir viaducts to the east.

Onni won council’s approval for its Canvas project because the zoning was already IC3, or essentially a type of zoning that allows homes when compatible with commercial use, said Onni vice-president of sales Nic Jensen.

“With this zoning, the city encourages more durable floors, larger windows and a more artist-inspired feel,” he said.

Indeed, the area is emerging as a hub for artists given that the Catriona Jeffries, Monte Clark and Equinox galleries are already operating on the flats.

ECUAD’s plan to leave its longtime Granville Island home for new space on the flats is expected to create a hub for 1,800 people, including students and staff.

The move comes partly so the art-focused university can be close to the Centre for Digital Media, which includes 76 student housing units and is operated in conjunction with the University of British Columbia, Simon Fraser University and British Columbia Institute of Technology.

Both will be near space that TransLink has identified as a potential future SkyTrain station if it and senior governments can provide funding for the Millennium Line to extend to Broadway largely via an underground route.

Other infrastructure upgrades that have been discussed include a pedestrian and cyclist overpass over the largely disused network of railway tracks between Great Northern Way and Terminal Avenue.

Onni is also contemplating a project that would include student housing, live-work space, rental accommodation and potentially a hotel on East First Avenue, near a turn where it becomes Thornton Avenue.

“That project is really up in the air though,” Jensen said. “It’s certainly in the pre-planning stage.”