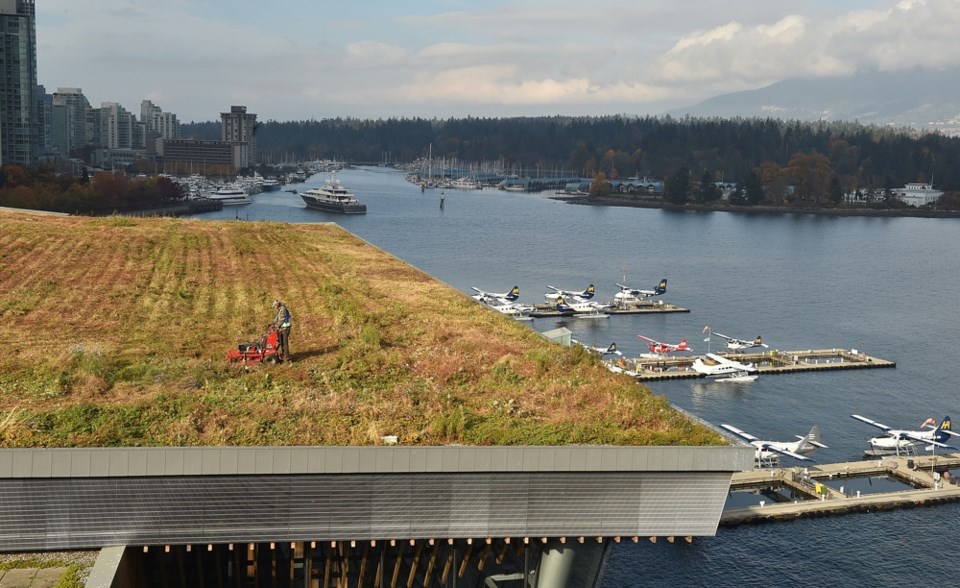 Landscaping crews started the annual mowing of the green roof at Vancouver Convention Centre this week. It takes about two weeks to trim and mow the six-acres living roof. Photo Dan Toulgoet

It only happens once a year.

The annual mowing of the Vancouver Convention Centre’s green roof started this week.

At six acres (2.4 hectares) it’s the largest green roof in Canada, the largest non-industrial living roof in North America and one of the 10 largest green roofs in the world. Planting started in 2008 and the new convention centre opened in 2009. The roof is home to 25 different species of plants, all indigenous to the West Coast.

“All together 400,000 plants and grasses were planted,” said Jinny Wu, communications manager at the convention centre, including 350,000 plants, 40,000 bulbs and 10 different species of native grass and herb seeds. Some of the more unique plants include Beach strawberries, Hooker’s onion, native sedges, native potentilla and Aster.

The roof is planted over a membrane, or liner, that protects the building below from water damage. On top of that the plants and grasses grow in more than 5,000 cubic metres of lava rock, gravel and topsoil — it weighs more than 11 million pounds and is about six inches deep.

Landscapers are up on the roof monthly to maintain and remove any invasive species, like blackberries and dandelions.

“Anything that can grow through that liner ultimately is going to start a leak down the line so we want to nip that in the bud and get it out,” said Mike Rist, Vancouver operations manager for WhiteStar Property Services, which has been maintaining the roof for the past four years.

It’s the first green roof the company has ever worked on. On top of the monthly maintenance, the roof gets mowed once a year in the fall. Work started on Monday and typically takes about two weeks to complete. Some of the clippings are left behind to return to the soil as fertilizer while the rest is removed and composted. About 11,000 pounds of grass and plants are cut every year.

Runnels zig-zag throughout the roof, designed to divert water runoff through the plantings. It keeps the water from just falling off the side of the roof in sheets, but also helps with irrigation, Wu said.

During drier months, an irrigation system kicks in to keep everything watered.

“We have a black water treatment facility that recycles our water from our bathrooms and that’s what’s used to irrigate… so it’s all very self-sustaining,” Wu said.

The whole roof operation is all about sustainability — the topsoil consists of silt dredged from the Fraser River, no chemical fertilizers, pesticides or herbicides are used, the roof also acts as an insulator helpng to keep the convention centre cool in the summer and warm in the winter, and it is also home to four beehives with European honey bees.