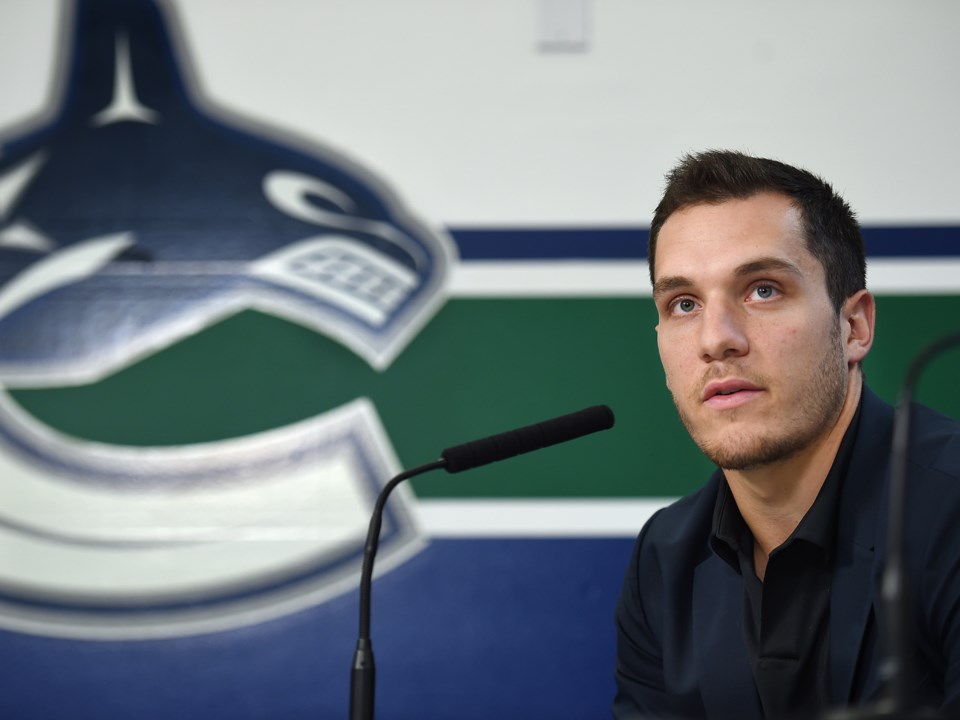 Bo Horvat had a fantastic 2018-19 season. He set career highs in goals (27), assists (34), and, by deduction, points (61). That’s despite having to take on more defensive responsibility when Brandon Sutter and Jay Beagle were out with injuries.

Most impressively, Horvat’s career year came while playing with a rotating cast of linemates.

At 5-on-5, Horvat player at least 100 minutes with 11 different forwards and at least 50 minutes with another three. That includes everyone from the top of the lineup, like Brock Boeser and Elias Pettersson, to the bottom, like Tyler Motte and Tim Schaller. The most he played with any one forward was 353 minutes with Loui Eriksson.

That’s a lot of inconsistency in both number and quality of linemates. With that kind of inconsistency, it’s a wonder Horvat performed as well as he did. While he showed chemistry with different linemates at different times, it generally didn’t last, through no fault of his own.

Horvat’s longtime linemate Sven Baertschi was sidelined by a concussion. Antoine Roussel meshed well with Horvat mid-season, but then had his season ended by a brutal knee injury. He and Tanner Pearson clicked, but Pearson arrived at the trade deadline, giving them a limited number of games together.

The hope this season, with the addition of J.T. Miller and Micheal Ferland, is that Horvat will have better and more consistent wingers throughout the season. It’s something Horvat is eagerly anticipating.

“It'd be great, I'm not gonna lie,” said Horvat with a rueful chuckle at the Canucks’ media day. “Last year with injuries and stuff, playing with pretty much everybody and every combination you can think of, it's tough to get chemistry.

One way that having better and more consistent linemates is that Horvat might pick up more assists. Horvat's rate of primary assists fell off last season despite his career high in total assists: his primary-assist rate was less than half of his previous season. Meanwhile, the passing data tracked by Corey Sznajder showed that his shot assists — passes that led directly to a shot — were just as high as in previous seasons. More consistent wingers might more consistently turn those passes into goals.

We can get a literal picture of how better wingers could help Horvat by using the visualization tools at HockeyViz, a hockey analytics website created by mathematician Micah Blake McCurdy. This week, he released his newest model, Magnus 2, for estimating how individual players can impact shot rates, which is useful as a predictive tool for how they’ll perform in the future.

With Magnus 2, McCurdy released several new visualizations and tools for his Patreon subscribers. One of those tools doesn’t just isolate an individual player, but all the other factors when he was on the ice at 5-on-5. If the charts just look like confusing blobs, don’t panic! I’m here to help.

Let’s start with Horvat’s isolated impact heat maps. These heat maps take into account contextual factors like usage, linemates, opponents, and zone starts, so this is what Horvat was individually responsible for when he was on the ice. On the left is offence and on the right is defence.

As you can immediately see, Horvat gets the puck to the front of the net. He’s one of the few Canucks that consistently created scoring chances from dangerous areas around the net last season, and it’s something he’s done throughout his career.

His +15.6% Impact, which means shots when he was on the ice were 15.6% more dangerous than the average NHLer, led the Canucks last season. No one else on the team drove the puck up ice and into dangerous scoring areas better than Horvat.

Horvat also made a difference defensively, though not to the same extent as his offensive impact. It’s an area where he’s shown improvement since his first couple seasons in the NHL, which we can see from his season-by-season heat maps.

Right from Horvat’s rookie season, he’s made a significant impact offensively, but his defensive game took a little longer to mature.

What’s intriguing is when we look at the splits for last season: the breakdown of the impact each individual component had when Horvat was on the ice.

On the far left is the actual on-ice results, devoid of context: the Canucks were out-shot when Horvat was on the ice at 5-on-5, as was every Canucks forward apart from Antoine Roussel and Josh Leivo. Next is Horvat’s isolated impact, then the impact of his teammate’s, his opponent’s, his zone starts, the score of the game, his head coach, and the amusingly named “Other??” at the far right.

Let’s ignore, for the moment, the “opponent” heat map, as it’s easy to be misled. Long story short, most top-six NHL forwards will have opponent heat maps somewhat similar to Horvat’s, simply because you face good players more often as they get more ice time. As McCurdy himself has said, “[Quality of Competition] matters, on average, about three or four times less than quality of teammates does, even after you take into account how you have five opponents at 5v5 but only four teammates.”

So, let’s look at the impact of Horvat’s teammates.

We can see that Horvat’s teammates had a slightly above-average impact defensively, but they were below-average offensively. While Horvat drove the puck up ice and into dangerous areas, his teammates did not.

Compare that to someone like, say, Mitch Marner, who had the benefit of playing with an elite play-driver like John Tavares:

No one’s asking Horvat’s teammates to have that kind of impact, but a little help would be nice.

That help could come from J.T. Miller if Micheal Ferland sticks on the top line. Miller has a strong two-way game and uses his playmaking and size to create scoring chances in similarly dangerous areas to Horvat.

Once Roussel returns, he would also be a good option to play with Horvat. He has underrated playmaking abilities to go with an agitating, two-way game, and has already shown chemistry with Horvat.

One underrated option is Josh Leivo, who is a tremendous two-way player when it comes to driving puck possession, even if his finish sometimes lets him down. It’s an option worth considering if Horvat ends up in a matchup role and needs capable defensive wingers.

Whether it’s one or two of the three players above, or players like Pearson or Baertschi, what Horvat needs most is consistency. If Horvat has the chance to develop chemistry with a winger or two, there’s a chance he can improve on last year.