How long will it take for the Canucks to put Quinn Hughes on the first power play unit?

Canucks coaches Newell Brown and Travis Green were in no rush to put Quinn Hughes on the first power play unit in his five-game audition last season.
Oct 9, 2019 7:30 AM By: Daniel Wagner 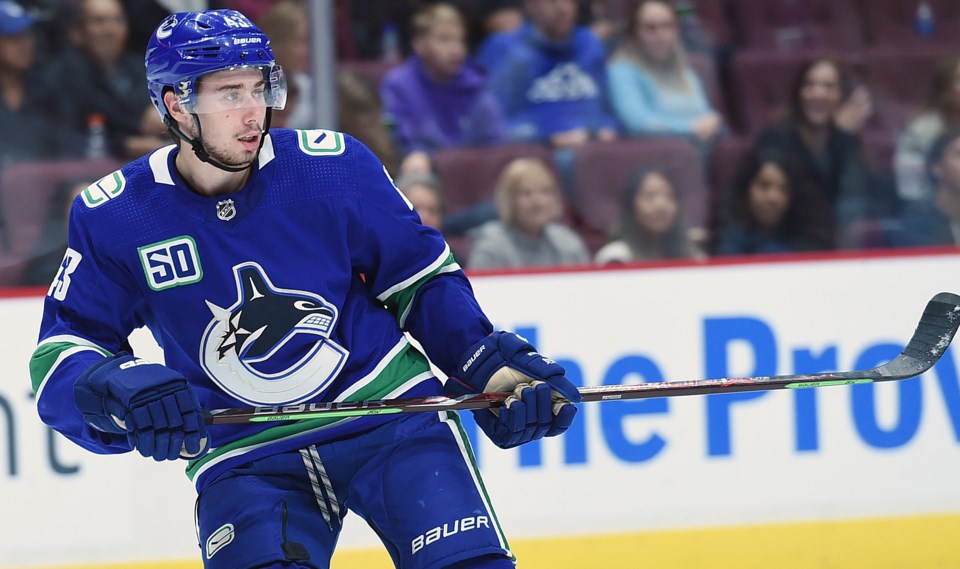 Canucks coaches Newell Brown and Travis Green were in no rush to put Quinn Hughes on the first power play unit in his five-game audition last season.

Even though the Canucks were well out of the playoff picture and fans were clamoring to see Hughes with Elias Pettersson and Brock Boeser with the man advantage, the Canucks resisted.

Green gave a couple reasons for waiting. They didn’t want to put undue pressure on Hughes in his already highly-hyped debut. They also didn’t want to disrespect the longest-tenured Canuck, Alex Edler, who had yet to sign a new deal, so could conceivably have been playing his final games in a Canucks jersey.

“I’m not going to say I’m not going to put him on the ice ever with the first power play unit,” said Green at the time, “but I’m not just gonna say, ‘Quinn Hughes is here and Alex, you’re off the top power play unit, here you go, Quinn,’ because you know what, he’d probably feel uncomfortable with that as well...Inside the locker room there’s those dynamics that happen.”

“Don’t get me wrong,” he added, “I’m excited about Quinn and his future and him being a power play guy, but I think we just need to put the brakes on this a little bit and let him get accustomed to playing in the NHL.”

That appears to still be the mandate early in the 2019-20 season. While the Canucks practiced with Hughes on the first power play unit early in training camp, he was on the second unit during the preseason and in the first two games of the regular season. Edler is in his familiar spot on the point of the first unit, while Hughes has been paired with Tyler Myers on the second unit.

It seems certain that Hughes will get the opportunity to play on the first unit sometime this season, but when?

We can look at the last two seasons, when two other rookies have made their mark on the power play, for two different approaches from the Canucks coaching staff.

Prior to putting Boeser on the first power play unit in a November 14th game against the Los Angeles Kings, the Canucks power play was 10-for-71 — a 14.1% success rate that was 28th in the NHL. The power play went 2-for-3 that night against the Kings and went on a roll for the rest of the season, at least until Boeser suffered a freak back injury in early March.

Despite some power play struggles after Boeser’s injury, the Canucks still had a power play percentage of 24.4% after adding Boeser to the first unit. That was the third-highest power play percentage in the NHL in that time. There’s a strong argument to be made that Boeser should have been added to the top unit a lot sooner.

Contrast that with last season, when Elias Pettersson played on the top power play unit right from the season opener. It made perfect sense: with the Sedin twins retired, their spot on the power play was up for grabs, and Pettersson checked all the possible boxes. He has superb vision and playmaking ability, so can create off the half-wall on the right side, but he also has a bomb of a one-timer from his preferred shooting area inside the right faceoff circle — The Petterzone — making him a multifacted threat for an opposing penalty kill.

For Pettersson, there was no waiting to play on the first unit: he was obviously the best choice so was immediately given prime placement on the power play. While the Canucks power play wasn’t perfect — it finished 22nd in the NHL with a 17.1% success rate — the potential for future success was readily apparent.

Which will it be for Hughes? Will he have to wait as long as Boeser or will he get quickly moved to the top unit like Pettersson?

Hughes has all the right attributes to be a power play quarterback at the NHL level. His elite skating ability is a boon not only to gaining the offensive zone with possession of the puck, but also moving along the blue line to keep the puck in at the point and open up passing and shooting lanes. He has the creativity and playmaking ability to distribute the puck better than Edler. No offence to Edler, whose passes themselves are exemplary; it’s just that Edler’s passes are predictable and expected. Hughes has the ability to create unexpected opportunities for his teammates, causing all sorts of problems for opposing penalty kills.

Last season, Ray Ferraro said, “As far as creativity, as far as being able to find the open guy, Hughes will be better than Edler almost immediately on the power play. That’s what he does.”

“For Hughes, when he comes into next year’s training camp,” he added, “they’ll protect him defensively like they’re going to have to with any other 19 or 20-year-old defenceman, but as far as the power play, I would be stunned if that’s really an issue for him.”

We saw examples of his excellence on the power play last season, even as he was on the second unit with the likes of Ryan Spooner and Markus Granlund. In a game against the Nashville Predators, Hughes tallied two assists on the power play.

The first was a brilliant bit of playmaking, using his skating to slash through the neutral zone and execute a give-and-go with Granlund to get the puck in deep. Then he sucked in three penalty killers along the boards, before finding Granlund all alone with a superb backhand pass.

His second assist was a little more traditional for a defenceman on the power play: a shot and a rebound. I’ve seen it suggested that Hughes doesn’t have the booming slap shot necessary to quarterback the power play, but point shots are generally overrated in terms of actually scoring — it’s one of the least dangerous shots on the ice.

What’s important for a defenceman on the power play is getting shots through traffic, where they can be useful for deflections or creating rebounds. That’s where Hughes’ shot can come in handy, as he has an accurate shot that he can get through traffic by using deception and his lateral skating ability to create shooting lanes.

A point shot doesn’t even have to get all the way through to the net; the most important thing is to get it past the first defender, where it can create chaos and a scramble for opposing penalty kills.

Beyond the success Hughes saw in limited minutes on the second power play unit, we’ve seen what Hughes, Pettersson, and Boeser can do with more open ice in 3-on-3 overtime. There’s a reason why fans are eager to see what they can do with a 5-on-4 power play.

So, when will fans get to see Hughes setting up Pettersson and Boeser on the power play? It could be quite soon.

In the first two games of the season, the Canucks power play has gone 0-for-10, though that’s a bit misleading: Edler did score a goal immediately after a power play expired. Still, if the power play continues to struggle, you can bet Hughes will get an opportunity on the top unit in short order.