How much will Jay Beagle, Tim Schaller, and Antoine Roussel help the Canucks penalty kill?

There weren’t a lot of positives for the Canucks last season, but one of them was the power play. After Brock Boeser was added to the first unit at the left faceoff circle, the power play was a legitimate threat night after night.
Daniel Wagner Sep 10, 2018 7:30 AM

There weren’t a lot of positives for the Canucks last season, but one of them was the power play. After Brock Boeser was added to the first unit at the left faceoff circle, the power play was a legitimate threat night after night. By the end of the season, the Canucks’ power play was ninth in the NHL, converting on 21.4% of their opportunities.

The same cannot be said for the other half of their special teams: the penalty kill.

The Canucks’ killed 78.3% of their penalties, placing them 21st in the NHL, but that doesn’t quite sum up how much their penalty kill affected them. Only two teams were shorthanded more often than the Canucks last season, so their poor penalty kill really sunk them. Only three teams gave up more goals while shorthanded: the Montreal Canadiens, New York Islanders, and Edmonton Oilers.

While Jim Benning didn’t focus on the penalty kill when talking about his free agent signings this summer, it had to have been a consideration. All three of Jay Beagle, Tim Schaller, and Antoine Roussel have extensive experience on the penalty kill.

You could point to coaching or goaltending when it comes to the Canucks’ penalty kill struggles, but personnel defintely played a part. So what could the addition of Beagle, Schaller, and Roussel mean to the penalty kill in this coming season?

First, let’s look at how the Canucks’ penalty killers performed last season. I took all the skaters who played at least 50 minutes on the penalty kill for the Canucks and looked at some key rate statistics: unblocked shot attempts (fenwick) against, scoring chances against, and goals against.


There are some interesting takeaways here. One is the improvement of Bo Horvat. While he shows up in the middle of the pack for the Canucks, that’s a massive difference compared to his first three seasons, where he was arguably one of the worst penalty killers in the NHL.

A couple other takeaways: Loui Eriksson was legitimately fantastic on the penalty kill and has been for years. Ben Hutton is shockingly good shorthanded, as is Troy Stecher, who was among the league leaders in goals against per 60 minutes among NHL defencemen on the penalty kill.

How do the Canucks’ new veteran recruits stack up in these statistics? And how did they rank on their respective teams?


Jay Beagle has a reputation: he’s a steady, reliable, shutdown centre. He’s one of the best faceoff men in the NHL, winning 58.5% of his faceoffs last season. Unsurprisingly, the Capitals used his a lot on the penalty kill: he led their forwards in shorthanded ice time by a wide margin.

Beagle may not have to play as large a role on the Canucks penalty kill with Brandon Sutter, a legitimately good penalty killing centre, on the roster, as well as the improving Bo Horvat. Still, it’s concerning that he looks so poor by these statistics.

Roussel and Schaller, on the other hand, look great by these statistics. Roussel led the Dallas Stars in fenwick and scoring chances against and was second in goals against. Schaller was near the top in all three categories for the Boston Bruins, and actually led in all three when you narrow down to those who played at least 100 minutes on the penalty kill.

Roussel and Schaller, at least, should improve the Canucks’ penalty kill, while Beagle might look better if he’s not relied upon to be the go-to guy.

Let’s look at these three acquisitions in another way: heat maps. These data visualizations from Hockey Viz show where shots come from when the player was on the ice during the penalty kill. 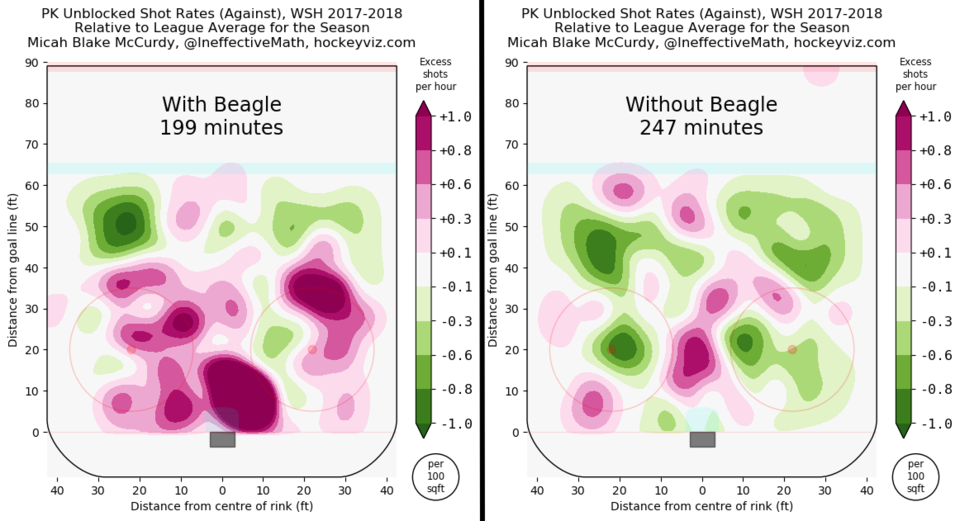 That’s not pretty. The Capitals gave up a ton of shots from in front of the net, as well as plenty from the top of the left faceoff circle (right from our perspective), a common spot for one-timers off a pass across the royal road. From this heat map, you can see that the Capitals penalty kill was a lot better when Beagle was on the bench.

Next up, Tim Schaller with the Boston Bruins. 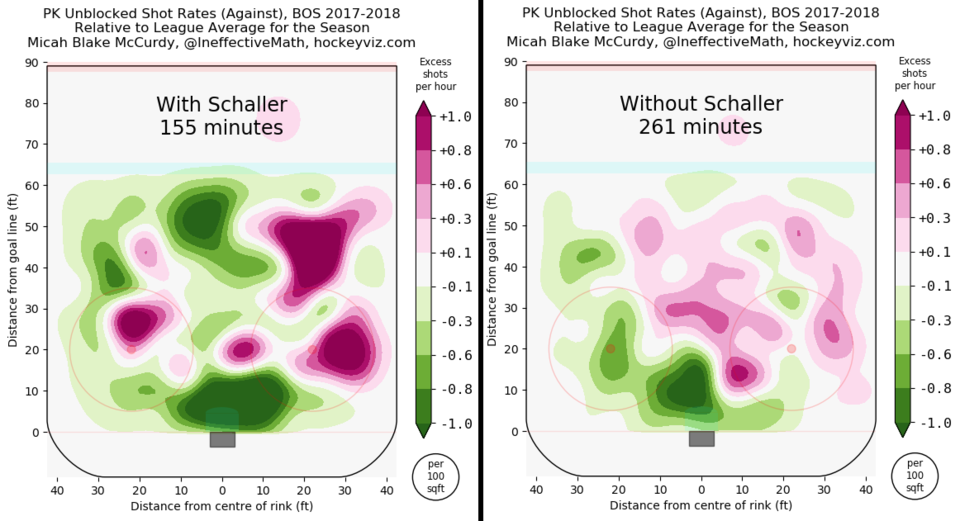 That looks a lot better. With Schaller on the ice, the Bruins penalty kill gave up an above-average number of shots from the top of the slot, but mostly kept opposing power plays to the outside. Without Schaller, more of those chances came from closer to the net. 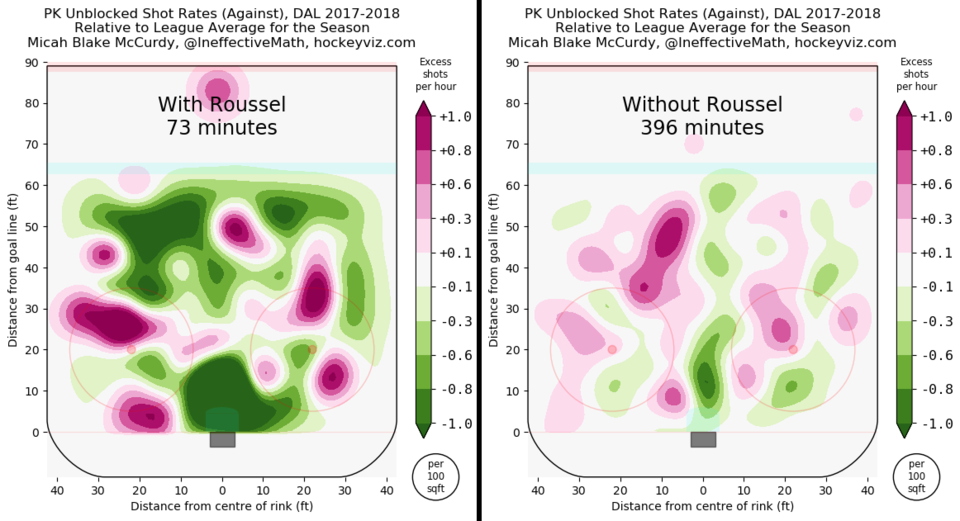 Roussel’s heat map is a deep, dark green around the net, significantly different from the heat map with him off the ice. When Roussel was on the ice on the penalty kill, the Stars did a great job of keeping shots to the outside.

So these heat maps match well with the numbers: Schaller and Roussel were on the ice for a lot fewer scoring chances compared to Beagle.

There is one other factor to take into account: context. Penalty killers that play more are likely to face the first power play unit of the opposition more often. There’s also the factor of what teammates each player is with. Even a great penalty killer would struggle with weak teammates.

One way we could take that into account is by looking at the shorthanded component of a regression-based model, like that of Evolving Hockey’s Goals Above Replacement (GAR) metric. Their model takes into account teammates and uses TOI% as a proxy for quality of competition, so should provide a useful way of accounting for the more difficult situations of a player who faces top power play units more often.

With that in mind, let’s look at the shorthanded Goals Above Replacement for the Canucks penalty killers last season, as well as the three new faces joining them next season.


This metric is the value a player provides above a replacement-level player, ie. a player available on waivers or as a call-up from the AHL. This particular chart is their Goals Above Replacement per 60 minutes of ice time.

There are a couple interesting notes here. One is that Ben Hutton takes a bit of a plunge down the chart. He’s still valuable as a penalty killer, but this suggests that his excellent penalty kill results may be partially due to playing in a lesser role. If he was playing more minutes on the penalty kill, his results might suffer.

Chris Tanev, on the other hand, rises up the Canucks’ chart and is ranked above Hutton. Interestingly, he’s still behind Troy Stecher, who truly seemed to earn his coach’s respect on the penalty kill towards the end of last season.

Among the forwards, Loui Eriksson still provides excellent value, while this also shows how much the Canucks’ penalty kill missed Derek Dorsett. Meanwhile, Darren Archibald might have some real value shorthanded.

Bo Horvat, however, suffers when measured by GAR, to the point that he’s equivalent to a replacement-level player. That’s still an improvement on his previous seasons, but it suggests he still has a lot of room for improvement.

Markus Granlund still looks pretty terrible, unfortunately. He was better on the penalty kill in his previous season, but still wasn’t amazing, so could be a prime candidate for having his minutes taken by Roussel or Schaller.

Speaking of, Roussel and Schaller look decent on the penalty kill by GAR, slotting in right behind Tanev. Unfortunately, Jay Beagle was below replacement level, suggesting that his context can’t erase his ugly results on the penalty kill.

So, there’s cause for both optimism and concern for the Canucks’ penalty kill next season. On the plus side, Roussel and Schaller are legitimately very good penalty killers, who can provide a nice upgrade on Granlund and Nic Dowd.

On the negative side, Beagle is probably going to play a ton on the penalty kill. He’ll win faceoffs, sacrifice the body, and look like a great penalty killer, but the Canucks’ results with him on the ice probably won’t be pretty.