How Vancouver eagles have adapted to urban life

Eagle population has rebounded significantly since 1960s when experts counted only one or two pairs throughout Vancouver
Jun 5, 2019 10:04 AM By: Ben Mussett 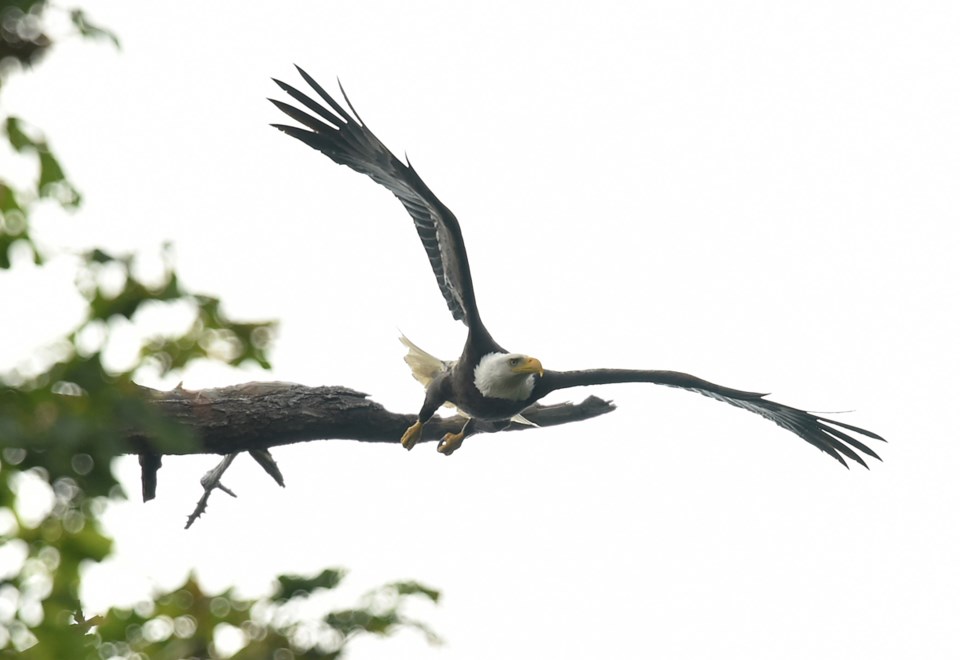 There are approximately 20 eagle nests dotted across Vancouver, including several in Stanley Park and the forested lands surrounding the University of British Columbia. Photo Dan Toulgoet

Diana Seear might know more about Vancouver’s bald eagles than anyone else in the city.

During nesting season, which runs February to August, the Kitsilano resident says she visits the city’s eagle nests nearly “every single night” to check in on one of the most unorthodox creatures to call Vancouver home.

“I know those eagles better than I know my children,” she joked about an eagle pair that nests near her house in a cotton wood tree at Vanier Park. The personalized licence plates on Seear’s Mercedes Benz read “EGL-RSQ.”

On a sunny day in May, Seear, a volunteer educator at the Hancock Wildlife Foundation, took the Courier on a tour of Vancouver’s eagle nests, typically found in wooded enclaves along the city’s shoreline. Eagles prefer nesting near the water, where the birds can feed on nearby fish and other beachcombing prey.

Seear counts approximately 20 nests currently dotted across Vancouver, including several in Stanley Park and the forested lands surrounding the University of British Columbia. But only 14 of those nests are actively in use by an eagle pair — the remainder previously abandoned due to structural issues or, in some cases, human disturbance, according to Seear.

Keeping track of individual birds is challenging, so eagle experts typically monitor the population by counting active nests, how many eggs those nests produce and the number of chicks to successfully fledge that year. While monogamous, eagles will quickly replace a mate if one goes missing. Though their partners might change, the firmly territorial male birds typically stick with the same nest year after year when possible.

Vancouver’s eagle population remains modest, but the urban birds have come a long way since the 1960s when experts say there were only one or two nests across the entire city. Back then, fishermen in Alaska — where local eagles return every summer for the annual salmon runs — believed the birds were a threat to their catch and hunted them widely, significantly depleting their population along the West Coast. Meanwhile, the widespread use of the pesticide DDT only exacerbated the North American eagle’s mid-20th century decline.

Recognizing DDT’s harmful effects on humans and wildlife, Canada and the United States banned the pesticide in the early 1970s. Soon after, the U.S. government labelled the eagle an endangered species. In the ensuing decades, their population rebounded, leading the American government to remove the bald eagle from the endangered species list in 2007.

One might wonder why some eagles choose a busy, growing city like Vancouver over life in the wild. Food is likely the most significant reason.

“In an urban area, the food availability is high,” said Ariane Comeau, conservation manager for the Stanley Park Ecology Society. Comeau said Vancouver’s eagles feed on everything from other birds, small mammals and fish to organic scraps and compost. The Vancouver Landfill in Delta is a major attraction for Metro Vancouver’s eagles, as those witness to their massive flocks along Highway 99 can attest.

But while city eagles may enjoy a wider array of food than those in the wild, life in Vancouver presents numerous challenges. Habitat loss is number one.

Just a few weeks ago, the Courier reported on a local tree-cutting company fined $18,000 for felling a tree in Dunbar that was home to an eagle’s nest back in 2017. The following year, the same company allegedly destroyed another eagle’s nest in the Hastings-Sunrise neighbourhood.

During our tour, Seear pointed out a nest on the UBC Endowment Lands at Ross Road in Wesbrook Village she says is currently threatened by surrounding development. “The eagles keep returning to the nest, but it has not been successful since the development started a few years ago,” she later explained. “There are six more nests in the area that deserve to be protected from disturbance or development.”

The proposed bike park expansion at Vanier Park would result in the loss of another eagle’s nest, which the Vancouver Park Board plans to replace with a so-called eagle nesting pole nearby.

David Hancock, a noted authority on eagles whose foundation has facilitated previous “raptor mitigation,” says these alternatives to natural nests have a high success rate. However, Seear, one of the Hancock Wildlife Foundation’s most dedicated volunteers, remains skeptical after witnessing some eagles hesitate to engage with nesting poles in the past.

Still, the park board believes Vancouver can strike a successful balance between environment and recreation at Vanier Park.

Joe McLeod, park development project manager, said the city has worked with the Hancock Foundation, the provincial government and other environmental consultants to “inform the project with some good, strong scientific underpinning.”

“We don't want the eagles to abandon the area entirely,” McLeod said. “The idea is to put [the nesting pole] right, kind of nestled in the woodlot itself to try to create a bit more of a buffer from a lot of the park activities and also surrounding activities like the Burrard Bridge, the Vancouver Museum and some of the other louder infrastructure that's around.”

Vancouver residents can provide feedback on the proposed bike park expansion through an online survey until mid-June. McLeod says staff expects to present the final project plan to the park board on June 24.

Apart from habitat loss, urban eagles also face several other unique threats. Every year, eagles in Metro Vancouver are electrocuted after landing on power poles, while others suffer poisoning from lead or rodenticide.

Despite these challenges, Vancouver’s eagles have adapted to life in a big city, says Mike Mackintosh, a former park board wildlife manager.

“It’s really encouraging that some of these species that you would think would be so sensitive about things have managed to coexist successfully in areas of high human activity,” he said.

“Humans are a problem for every species,” continued Mackintosh. “Let's face it.”