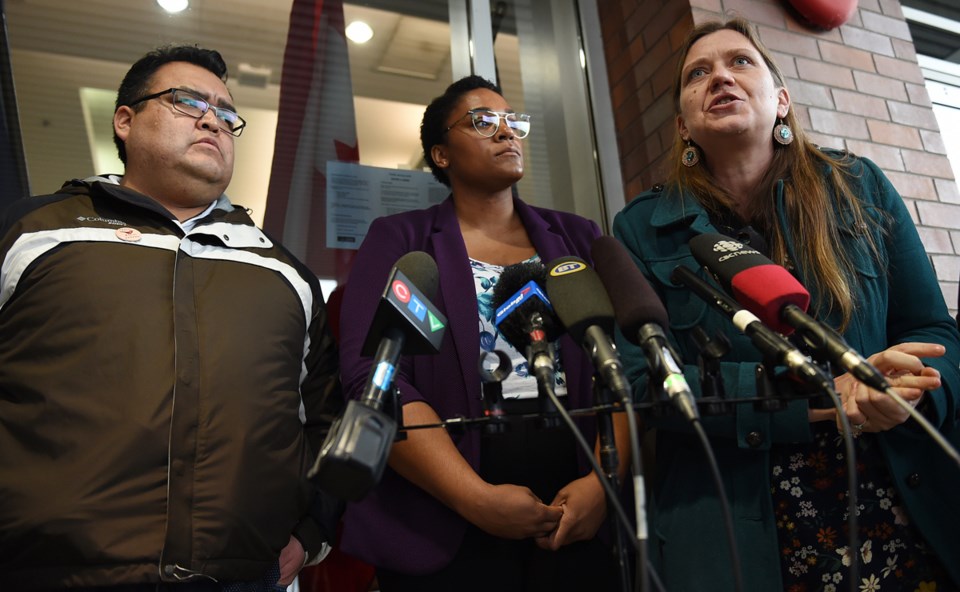 Two organizations that advocate strongly for human rights say a new policy on how Vancouver police conduct street checks is flawed and needs to be revised or scrapped to ensure innocent people don’t get interrogated by officers.

Representatives from the B.C. Civil Liberties Association and the Union of B.C. Indian Chiefs held a news conference Thursday outside the Vancouver police’s Cambie Street precinct to criticize the policy, which came into effect earlier this month.

“We believe that it misses the mark,” said lawyer Latoya Farrell of the civil liberties association.

“The proof that street checks work is anecdotal at best. We are really concerned with the need to hold on to this tool.”

Chief Don Tom, vice-president of the Indian Chiefs organization, said street checks and the policy that allows them to continue will further strain relationships between the police and Vancouver’s Indigenous community.

Tom and Farrell spoke to reporters prior to a Vancouver Police Board meeting, where the policy was discussed by board members and later addressed by Police Chief Adam Palmer in a media scrum.

Palmer has repeatedly denied his officers’ use of street checks has been discriminatory, despite the department’s own data showing an overrepresentation of Indigenous and black people checked between 2008 and 2017.

The VPD’s written guidelines from 2017 define a street check as when an officer stops a person to conduct an interview or investigation in regards to suspicious activity or a suspected crime. Police have said street checks have helped solved crimes, including homicides.

The chief told reporters he understood the practice and new policy remains contentious with some groups. It was based on guidelines or standards the provincial government set for all B.C. police departments to adopt by Jan. 15.

“You will have people come down on the side that you should never do any [street checks] under any circumstances whatsoever,” Palmer said.

“You will have other people who will think that the police should do these all the time. So I think these guidelines find a right sweet spot that respects human rights, civil rights...but also still allow the police the ability to use their common law and authority to prevent crime and protect the public.”

The new policy says an officer must ensure a person is aware of their rights during a street check.

Random and arbitrary stops are not permitted and an officer cannot stop someone based solely on “an identity factor” such as race, social or economic status, religion, ancestry and sexual orientation.

The policy is also clear that an officer must have a specific public safety purpose to ask a person for identification and must inform the person of that reason.

The chief and the board are expected to provide further comment on street checks next month when an independent consultant’s report on the practice will be released.

The board hired the consultant, who is a former police officer, after pressure from the B.C. Civil Liberties Association and the Union of B.C. Indian Chiefs to hear from people who had been the subject of a street check.

The report has been completed and the police board was to review it at a closed session after the public portion of Thursday’s meeting.

Mayor Kennedy Stewart, who doubles as chairperson of the board, said the board will see if there are additional measures to be taken after reviewing the report.

“We have a very thorough report — the biggest report that we’ve commissioned in a very long time,” said Stewart, who joined Palmer in the scrum prior to the closed meeting.

“We haven’t discussed it yet, so I can’t give you any details.”

Meghan McDermott, policy director for the civil liberties association, said the organization will continue pushing for changes to the street check practice, noting the provincial government’s standards are yet to be fully completed.

“What we’re hoping to do is continue to push and advocate for human rights to be respected in that provincial standard,” McDermott said.

“And then that in theory should flow down into all the policies [at police departments] across B.C.”