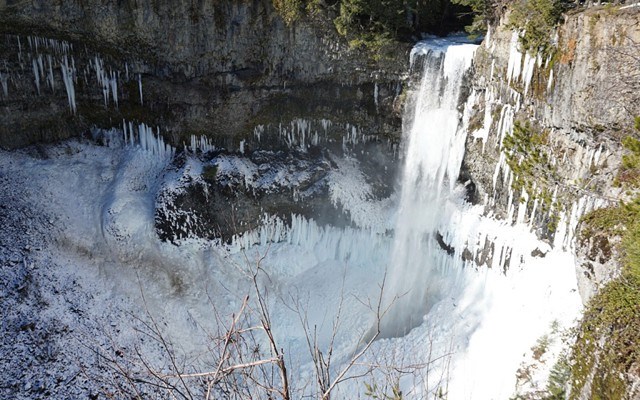 BEAUTY AND THE BEAST Brandywine Falls and other provincial parks provide spectacular views and easy photos — along with some hidden hazards. Photo Malissa Bujok

Backcountry wanderers beware: the Instagram allure is real, and disaster can strike when you least expect it.

On Sunday, Feb. 17, Dall was exploring the natural beauty of Brandywine Provincial Park with some friends — drawn to it, like so many others, by photos posted to the internet.

"We'd seen a few photos on Whistler Winter and that sort of thing and it looked really nice, so we went for a hike down there," Dall said.

Fellow hikers told me I was a champ for hiking all the way here in sneakers. Meanwhile... *slips on ice* - Note to anyone who plans to do this hike during the winter WEAR SNOWSHOES/BOOTS TRUST ME . @auscatalano

The group was rounding the last bend before the falls when they heard a sound like thunder, followed by urgent shouts of warning from a man up ahead.

Some ice had broken free from the lookout deck directly above them and was hurtling downwards.

Two of the girls found cover behind some rocks, while another evaded the falling ice.

Dall tried to run back the opposite way. "But as I was running, one of the ice boulders clipped my ankle, and I fell down, like, onto my face," she said, noting that she's got a nice facial bruise to prove it.

But the real damage was to her foot — the ice "boulder" that clipped her fractured both her cuboid and cuneiform bones, leaving her in a moon boot for the next three to four months.

"The timing was pretty impeccable, that we [were] just like, [standing] right underneath this part to go around the cliff, and it broke off and slid down right at that time," she said. "When we got home, we were all so shaken up. It was a really scary experience."

Ryan Marrin was also out at Brandywine with friends that day, and said his group was the first to come across Dall's after the ice slide.

"I heard some crying up ahead, and the girl had just had her foot crushed," he said.

"When we walked past and saw the ice chunks that had actually fallen, that they were describing, they were massive."

Marrin said the ice likely fell from underneath the lookout deck up top, where there had been icicles nearly 2.5 metres long hanging underneath.

"On their way down, they obviously reduced in size, because of the tumbling," he said.

"But looking at the ice chunks sitting in the water [at the bottom]... honestly, if [the hikers] were underneath it, they would have been dead for sure."

Taliha Walker, who was part of Dall's group, doesn't dispute that.

"Honestly, when I didn't have a rock to hide behind, I actually looked up, and I just saw all this ice coming down at me, and I just thought, 'OK, well I'm gone,"' she said.

Looking up in that second, Walker said it "felt like a wave" of ice was descending on her.

"To me, it was substantial... like an extreme, extreme hailstorm," she said.

Luckily, her friend pulled her into cover behind a rock at just the right moment.

When the dust had settled, the three women found Dall leaning against a tree, in a lot of pain and not breathing properly as she slipped into shock.

The man who alerted the four women to the falling ice came to assist, eventually helping to carry Dall back out to the trailhead.

"He said he's been backcountry snowboarding like all his life, and he's been in a few backcountry avalanches, and he said that's the scariest thing he's ever seen happen," Walker said of the man (who did not respond to an interview request before Pique's deadline).

For Dall, the extended stint in a moon boot isn't ideal, but with her stay in Whistler coming to an end next week (even before the injury), at the very least she can take comfort in knowing the injury hasn't shortened her season by much.

"It's a nice goodbye gift from Canada," she joked.

"I only had a week left of snowboarding anyway, so I guess you could say it's OK timing."

And while she's no stranger to hiking, her experience at Brandywine taught a lesson she hopes to share with others.

"You just have to keep your wits about you," she said.

"Even when you're doing something that you think you're not in danger, you just always have to be aware of your surroundings and what could possibly go wrong."

The provincial Ministry of Forests, Lands, Natural Resource Operations and Rural Development was unable to provide an interview or any information on the incident before Pique's deadline.