If Adam Gaudette wins the Hobey Baker, what does that mean for his NHL potential? 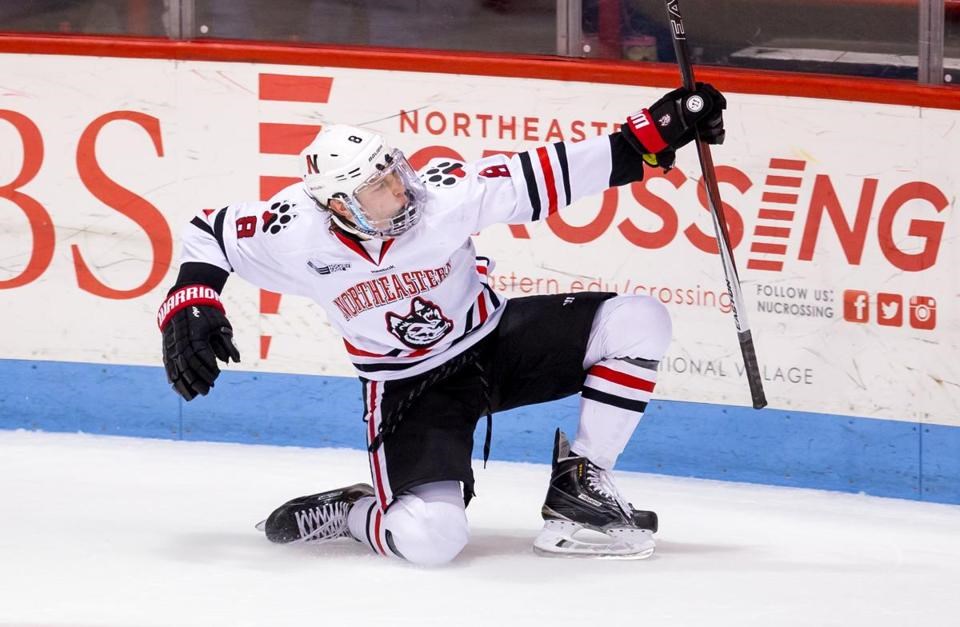 Adam Gaudette is primed to make his NHL debut on Thursday against the Edmonton Oilers. For Gaudette, it’s yet another highlight in a year full of them: he led the NCAA in scoring, had a hat trick to win the Beanpot Tournament, and won the Walter Brown Award as the best college hockey player in New England.

Gaudette is likely to add one more highlight before the end of the season. He’s the odds-on favourite to win the 2018 Hobey Baker Award as the best player in college hockey.

If he wins, it will be an exciting addition to his trophy case, but does it mean anything to his chances of NHL success? In one sense, of course not, because Gaudette winning the award won’t change who he is and what he’s accomplished thus far.

But what has it meant for past award winners? Does being the best player in college hockey translate to to excelling in the NHL?

Hobey Baker winners have had a nice run of success of late. The last four winners are all definite NHLers, with two certified stars in Jack Eichel and Johnny Gaudreau. Jimmy Vesey might not be all he was cracked up to be, but he’s already played 153 NHL games, while Will Butcher, who some thought might be a bust, has been a key part of the New Jersey Devils’ resurgence this season with 39 points in 75 games.

Before those four, however, there was a string of four busts: Drew LeBlanc, Kevin Connolly, Andy Miele, and Blake Geoffrion. They were great college players — Miele was the highest scoring, with 71 points in 39 games — but they have played, respectively, two, zero, 15, and 55 NHL games.

Which is it going to be for Gaudette? Is he more likely to be a success story or a bust?

I looked back at the entire history of the Hobey Baker Award, which has only been around since the 1980-81 season. That year, it was given to Neal Broten, a legend of Minnesotan hockey, who went on to play over 1000 NHL games, mostly with the Minnesota North Stars, and finished his career with 923 points.

The most successful Hobey Baker winner is Paul Kariya, one of the most dominant scoring wingers of the Dead Puck Era. He racked up 989 points in 989 career games before his Hall of Fame career was cut short.

Of the 37 Hobey Baker winners, 15 have been outright busts that haven’t reached 100 NHL games. Of those 15, all but four won their Hobey Baker Award in their senior year. Adam Gaudette is a junior, having just finished his third season at Northeastern University.

It stands to reason: if someone is not the best player in college hockey until their fourth year, when they’re older and more experienced, they’re a little less likely to go on to NHL success. A player that wins the Hobey Baker as a freshman, sophomore, or junior is standing out among his peers at a younger age.

25 of the 37 Hobey Baker winners have been seniors; 11 of those 25 have failed to play 100 NHL games. Those are surprisingly poor odds of success for the best player in college hockey. If you’re an NHL team looking at standout seniors in the NCAA, that could be a cautionary tale.

The four non-seniors to win the award and fail to play 100 NHL games are Ryan Duncan, Robb Stauber, Marty Sertich, and Peter Sejna. Stauber is a goaltender, which limits his usefulness as a comparison to Gaudette, but the other three are forwards.

Gaudette has one important advantage over Duncan, Sertich, and Sejna: height. Duncan is 5’6”, Sertich is 5’8”, and Sejna is the giant among them at 5’10”. Height has a deterministic factor when it comes to NHL success both because NHL coaches and general managers have biases against smaller players and because smaller players do often struggle to find time and space at the NHL level. Generally, smaller players need to be exceptional offensively to sustain a career in the NHL.

Gaudette, on the other hand, is 6’1” and has the right components to his game to carve out a bottom-six role if offence is hard to come by in the NHL.

Of course, Canucks fans and management are hoping for more from Gaudette than just 100 NHL games; they’re counting on him to be an impact player. So, how have players who won the Hobey Baker Award as a junior performed in the NHL?

Only two freshmen have won the Hobey Baker and they’re obvious stars: Kariya and Jack Eichel. Three sophomores have won the award, with two of them — Duncan and Stauber — being busts, but the other being Ryan Miller, who has had a fantastic, if not quite Hall-of-Fame career.

That leaves seven juniors who have won the Hobey Baker.


Of that group, there are two outright busts — the aforementioned Sertich and Sejna — who have disconcertingly similar statistical profiles to Gaudette, apart from their height. Then there’s Bill Watson, who played just 115 NHL games, tallying 59 points, before getting stuck in the minors and retiring from hockey at just 25 years old.

The remaining four junior Hobey Baker winners went on to serious success, however, including young star Johnny Gaudreau and the recently-retired Matt Carle.

Perhaps Tony Hrkac is a reasonable baseline for Gaudette: he never cracked 20 goals in a season and spent time in the IHL and AHL, but he still carved out a 758-game NHL career and won a Stanley Cup with the Dallas Stars. Gaudette has the potential to be better than that, but that’s still a pretty successful hockey career.

So, does a Hobey Baker Award mean Gaudette is more likely to have a long NHL career? Not necessarily, but it certainly doesn’t hurt.