If the Canucks can survive November, they might just be a playoff team

The Canucks rolled through October like kids on Halloween through the neighbourhood that gives out full-size chocolate bars: they were racking up big wins at pretty much every stop.
Oct 31, 2019 3:55 PM By: Daniel Wagner 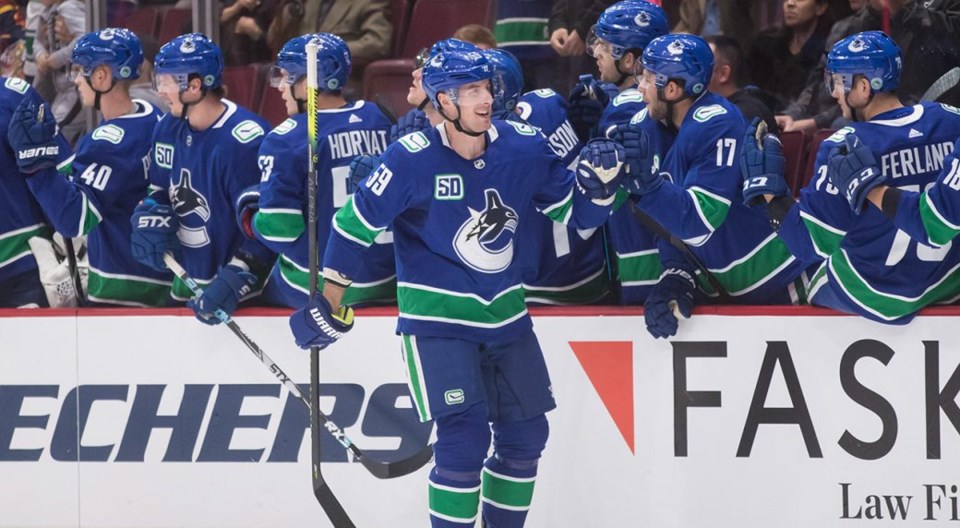 The Canucks rolled through October like kids on Halloween through the neighbourhood that gives out full-size chocolate bars: they were racking up big wins at pretty much every stop.

Their 8-3-1 record has them second in the Western Conference and sixth in the NHL in points percentage. They currently sit second in the Pacific Division, with two games in hand on the first place Edmonton Oilers, who have started to show some warts after their hot start, losing to Florida Panthers and Detroit Red Wings teams that the Canucks blew out of the water.

October has been good to the Canucks in recent years. In fact, in each of the last four seasons, the Canucks were in playoff position at the end of October. In 2015-16 and 2018-19, they were even first in the Pacific Division after the first month of the season.

Their combined record in October in those four seasons was 23-15-7, which would be a 97-point pace over a full 82-game schedule. That’s good enough to comfortably make the playoffs in the Western Conference in each of those seasons. In other words, the Canucks have played like a playoff team in October the past four seasons, but haven’t been able to sustain that in the subsequent months.

November is when the wheels have started to come off for the Canucks in recent seasons. Last season, in particular, the Canucks quickly fell from first in the Pacific to sixth after going 3-8-3 in November.

It makes a certain amount of sense. After all, a month into the season is when injuries start to crop up, exposing teams that don’t have enough depth. Last season, Jay Beagle was already injured when the Canucks lost Alex Edler and Brock Boeser for most of November, Brandon Sutter and Sven Baertschi for even longer than that, and also lost Anders Nilsson to injury, forcing Jacob Markstrom into a long series of starts that caused fatigue and his worst month of the season.

This season does feel different, however. There are a lot of positive signs in the Canucks’ underlying analytics that suggest the team is for real, especially when you adjust for score. Since the Canucks have had some big leads and teams tend to be more aggressive and take more shots when they’re trailing, the Canucks’ possession statistics look even better when the score is taken into account.

The Canucks’ score-adjusted corsi percentage is 54.24% according to Natural Stat Trick, which is second in the NHL behind only the Boston Bruins. When you look at scoring chances and expected goals, the Canucks are still well above average, in 9th and 8th in the NHL, respectively.

Those are positive signs that weren’t in place at this time last season. Despite being first in the Pacific, the Canucks were 28th in the NHL in score-adjusted corsi, 30th in scoring chance percentage, and 29th in expected goals percentage. The strong start in terms of wins and losses was necessarily reflective of how well the team actually played.

This season, the Canucks’ record is a much more accurate reflection of how they’ve performed and there are a lot of reasons to be optimistic about the rest of the season.

There is, however, one reason to apply some caution to that optimism. The Canucks’ haven’t faced a very strong schedule so far this season. Not only have they had a lot of rest between games early in the season, but they’ve faced some weaker opposition. According to a model developed by Dom Luszczyszyn at The Athletic, the Canucks have had the weakest schedule in the NHL.

It adds up. The only teams the Canucks have faced that made the playoffs last season are the Calgary Flames, St. Louis Blues, and Washington Capitals. The Canucks lost two of those games and only eked out a shootout victory against the Blues.

There is a positive sign, however: the Canucks haven’t just been winning these winnable October games; they’ve been dominating. They don’t look like they’re on a level playing field with the worst teams in the league. This Canucks team should beat teams like the Los Angeles Kings and Detroit Red Wings, but they’ve done more than that: they’ve made mincemeat out of them.

In two games against the Kings, the Canucks out-scored them 13-to-5, inspiring a salty outburst from Drew Doughty, who complained that “a team like that” shouldn’t beat the Kings so soundly.

The Red Wings fared no better against the Canucks, who out-scored them 10-to-3 in their two games so far. The Canucks have also mixed in a 7-2 thrashing of the Florida Panthers.

It’s better to win these games than to lose them, particularly when you can win them so convincingly. After all, the Kings have beaten the Flames twice this season already.

Their schedule in November, meanwhile, is nowhere near as kind. They’ll have a lot less rest between games, as they play 15 games in 30 nights, including two back-to-back sets of games. They’ll be facing tough opponents, including the Nashville Predators, Colorado Avalanche, and Pittsburgh Penguins.

The end of November features a particularly tough road trip with six games in 12 nights, capped off by their first home game back being the second half of back-to-backs on December 1st.

If the Canucks can make it through November unscathed by injuries and still at the top of the Pacific Division, they’ll erase a lot of doubts and force the rest of the NHL to take them seriously.

If they stumble like in past Novembers, then skepticism could set in again. It won’t mean that the Canucks can’t make the playoffs, but it will become a tougher task.