If Vasili Podkolzin wasn’t available at tenth, the Canucks were considering trading down 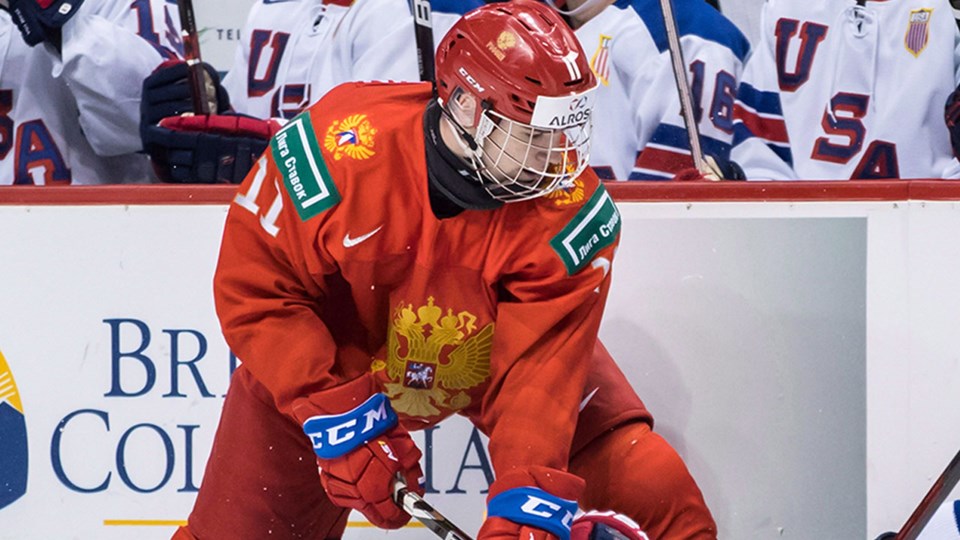 The first day of the 2019 NHL Entry Draft was surprisingly quiet. Despite plenty of hype heading into the draft about potential trades, only one actually happened: the Arizona Coyotes moved their 45th overall pick to the Philadelphia Flyers to trade up from 14th to 11th, in order to draft Swedish defenceman Victor Soderstrom.

There was plenty of buzz and rumbling around the Canucks, who were rumoured to be involved in all sorts of trades: trading up, trading down, and moving all around. Instead, they stood pat with their pick at tenth, selecting Russian power forward Vasili Podkolzin.

After the first round concluded, however, Jim Benning suggested that they could have traded the pick if Podkolzin wasn’t available.

“We had him rated ahead of all these other guys,” said Benning. “So, we were thinking that he was the last name, if he wasn't there at ten, we were looking to maybe trade down and get another pick. And there were some guys we liked after we picked, but when he was there, we're making the pick.”

It’s an intriguing statement, as it suggests they weren’t quite as high on some of the players that went shortly after they selected Podkolzin, including the versatile Matthew Boldy, pint-sized goalscorer Cole Caufield, speedy Alex Newhook, and the hardworking Peyton Krebs.

If Podkolzin had been picked ahead of tenth, the Canucks could have explored trading down, whether into the late teens, where Krebs and defenceman Thomas Harley were selected, while also picking up another pick later in the draft, possibly the second round. But Benning and the Canucks are confident that Podkolzin is exactly the player they need.

“He's got the size and strength, he's good along the walls, can get to the net,” said Benning. “He’s going to be a good complementary player to some of our really skilled players, whether it's [Elias Pettersson] or [Brock Boeser] or [Bo Horvat].”

“He plays a heavy game,” he continued. “You know, we see that the playoffs, you need those strong guys that can get to the net and protect the puck, and he can do all those things.”

The playoffs certainly weigh heavily on Benning’s mind, as the Canucks have missed the postseason in four straight seasons. The latest edition of the Stanley Cup Playoffs suggested to Benning that the Canucks do need more size and physicality, without sacrificing skill.

That's exactly what Podkolzin brings. While not massive, Podkolzin plays a big game. He’s 6’1” and 196 lbs, but uses every inch and ounce to battle for the puck.

“He's the type of player that takes puck battles personal,” said Benning. “He wants to win his puck battles and I think that that's what makes him an effective player.”

Podkolzin also has the intangibles that the Canucks look for in a prospect that tell them whether a player will continue to grow his game. His coaches in Russia praise his leadership and that’s something that stood out for the Canucks.

“He's a captain of his teams. I thought even at the World Junior for a 17-year-old kid, his work ethic and his competitiveness, he was a leader for the Russian team as a young player,” said Benning. “He's got that in him...to be a leader.”

He hates losing,” he added. “He wants to win, he gets angry when he loses, and those are the types of players we want.”

Podkolzin’s fiery on-ice play doesn’t quite translate to his interviews, possibly because he’s not yet confident enough in his English. Chibisov pulled double-duty for the Canucks, doffing his scouting hat for a moment to take on translating duties for Podkolzin.

“He says that he can he can do whatever will be asked for to do,” said Chibisov on Podkolzin’s behalf. “[He can] be a power forward, playmaking for guys, he can score goals as well.”

Speaking to the challenge of playing in men’s leagues in Russia as a 17 year old, Podkolzin made it clear that he didn’t back down from the physical challenge, something that was clear when you watched him play.

“He says it wasn't wasn't hard from the physical point of view,” said Chibisov for Podkolzin. “It was hard, like, psychologically and he hopes that these two years that he's going to play in Russia, he will get stronger, and will be more a man.”

He also made it clear that he knows his own weaknesses, specifically his skating isn’t quite as strong as he would like it to be. He intends to use the next two years not just to mature as a person, but to improve his skating, so that he’s ready to hit NHL ice as soon as his KHL contract is complete.