In which events could Elias Pettersson compete at the 2019 All-Star Skills Competition? 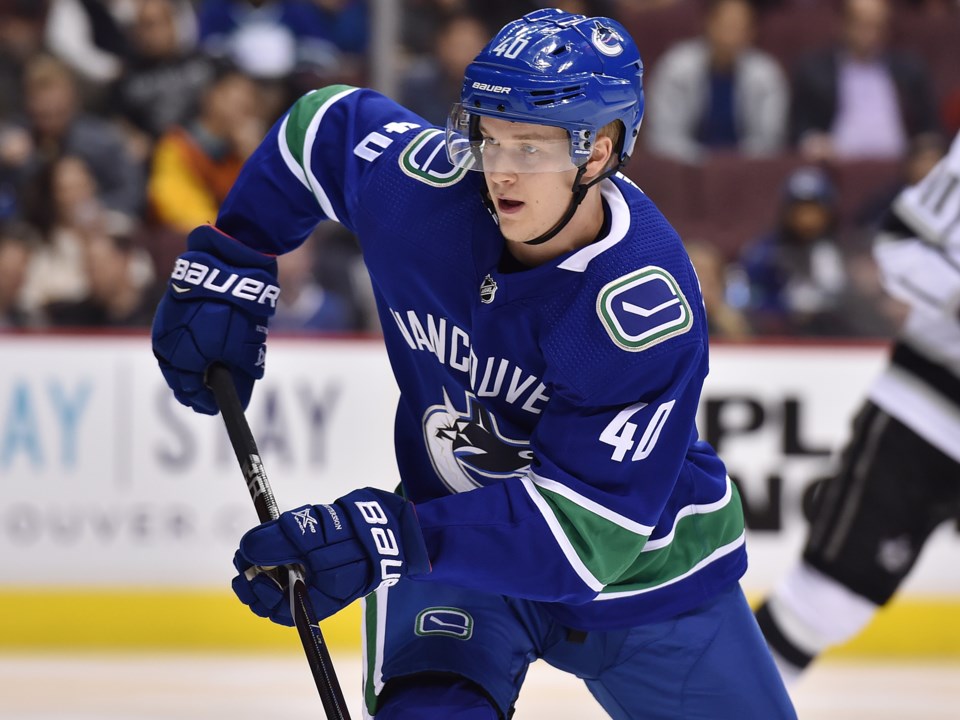 When Brock Boeser went to the 2018 All-Star Game, was there any doubt that he would compete in the Accuracy Shooting contest at the Skills Competition? Boeser went into the All-Star break with 24 goals in 46 games, good for 7th in the NHL at the time, and was already renowned for his hard and accurate wrist shot.

When it comes to Elias Pettersson, however, that’s an open question. The skillset of the Canucks’ superstar Swede lends itself to more than one event in the Skills Competition. There are six different events set to take place at the SAP Center in San Jose on Friday and Pettersson could conceivably compete in every single one.

Let’s start with the Accuracy Shooting competition, where he could give the Canucks back-to-back winners, both rookies. The format is the same as last year, with five LED targets that light up randomly for three seconds at a time.

Pettersson’s sweet release and pinpoint accuracy with both his snap shot and wrist shot would make him not just a competitor for the crown, but a potential favourite. Pettersson’s 23 goals lead all rookies by a wide margin and he’s 10th in the NHL in goals-per-game. Notably, he’s first in the NHL in shooting percentage.

With the way Pettersson can shoot the puck, it would make perfect sense for him to take on the Accuracy Shooting contest for the Pacific Division. While he only hit three out of four targets in the contest at the Canucks SuperSkills event, he jokingly tried to show off with one-time slap shots on the fourth target.

The winning shot for Pettersson was 99.4 mph, which would have been enough to finish second behind last year’s winner, fellow forward Alex Ovechkin. If he catches a puck just right, it’s easy to imagine Pettersson topping 100 mph, which would put him in contention to win the event outright.

Then there’s the Puck Control event: is there any doubt that Pettersson has the sweet stickhandling to excel at such an event? The race features three obstacles: Stickhandling, Cone Control, and Gates, described by the NHL as follows.

Canucks fans are well aware of Pettersson’s ability to maneuver through traffic in game situations, but he also has the tricks in his arsenal to juggle the puck through the gates at the end of the course. That’s an area that tripped up several All Stars at last year’s event.

Daily reminder that doing tricks will make you worse and hockey and anyone who does tricks is therefore a bad hockey player. On a side note, here's Pettersson in warmies. pic.twitter.com/83AeNdYIy7

The Save Streak event is aimed at goaltenders and it’s slightly cheating to say that Pettersson will compete in it: every skater will participate. It’s a series of shootout attempts in a row, with the goaltender attempting to amass the longest streak of saves.

Pettersson could still steal the show from the goaltenders, as he has several nifty moves in his quiver, such as the nastiness he pulled on Pekka Rinne on a penalty shot this season. Personally, I’m hoping we get a glimpse of the between-the-legs move he busted out for a Vaxjo Lakers skills competition.

Then there’s the Premier Passer event, a variation of which was the Sedins’ bread and butter when they were at the All-Star Game. It involves three different segments: Breakout Pass, Mini Nets, and Target Passing. Pettersson, with his sublime playmaking ability, could easily excel at this event as well.

Finally, there’s the Fastest Skater event, which is the only one where Pettersson isn’t a natural fit. Pettersson is a strong skater, with excellent edges and great agility, but he’s not known for his powerful, straight-ahead speed.

That said, Pettersson is a lot faster than he looks. He’s so smooth on his skates, that it’s sometimes missed just how much power he creates in his stride. Power skating coach Robby Glantz called Pettersson “sneaky fast” on NHL Now and we’ve seen him suddenly create separation with his acceleration all season. Will that be enough to get him in the Fastest Skater competition? Probably not.

Okay, so maybe there’s one event for which Pettersson wouldn’t make sense.

As for Pettersson himself, he hasn’t given it much thought, though he did have a parting shot at Brock Boeser when it was suggested that his performance in the Accuracy Shooting would be a tough act to follow.

Maybe so, but Pettersson could only hope for that kind of luck on Friday.