City recognizes individuals and groups for their efforts in diversity and inclusion, environmentalism, accessibility, volunteerism and health activism
Feb 9, 2018 11:58 AM By: Courier Staff 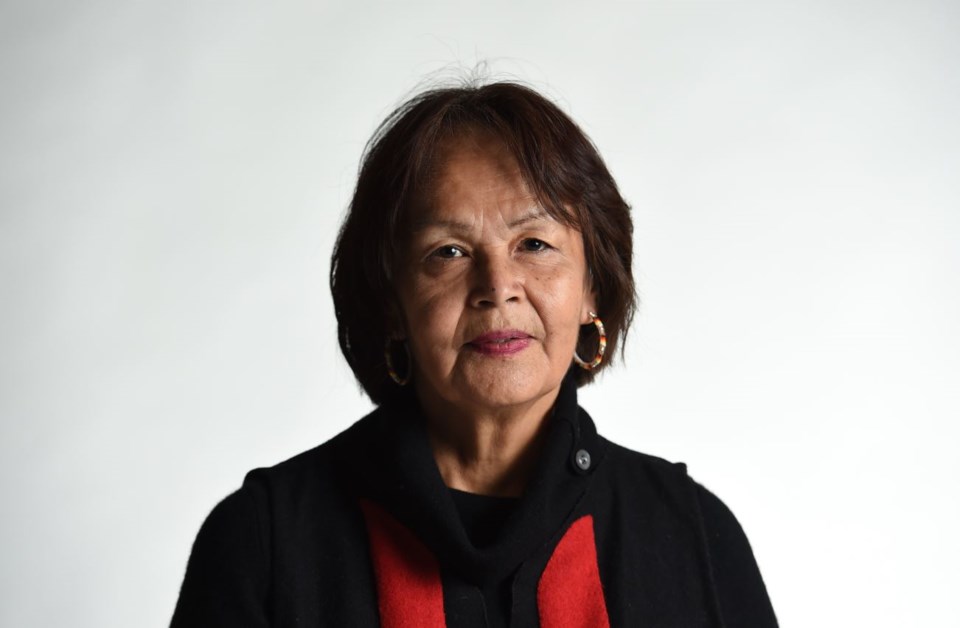 Lillian Howard received the Civic Volunteer Award (individual). A member of the Mowachaht-Muchalaht First Nation and of Nuu-chah-nulth, Kwakwaka’wak and Tlingit ancestry, Howard was instrumental in organizing last year’s Gathering of Canoes, The Drum is Calling Festival and the Walk for Reconciliation events. Howard is also co-chair of the city’s Urban Indigenous Peoples’ Advisory Committee. Photo Dan Toulgoet

Doctors, student activists and transgender rights advocates were among the dozens of Vancouverites celebrated Thursday with one of the city’s loftiest distinctions.

Recipients are nominated by the public, vetted via a peer review committee and confirmed by council members who assess influence, impact and achievements.

The Sir Winston Churchill Secondary school students have supported modular housing for homeless people in their neighbourhood, staged rallies and encouraged conversation among the many competing voices in the area.

An artist and community engagement facilitator, Richards is the founder of for the Woodward’s Community Singers, drop-in, no-cost choir based downtown. Her volunteer work posts include the city’s Black History Month Committee, Hogan’s Alley Working Group and Big Sisters.

The society runs a volunteer-led harm reduction and overdose prevention site in the Downtown Eastside that works to reduce the rash of opioid-related deaths in the city. The group’s working model has been replicated in 20 other B.C. municipalities across the province.

Nanjiba is a Grade 11 student at Britannia secondary school with who’s involved with all manners of extracurricular, volunteer and advocacy work. She’s a member of the LEO Club, the youth branch of the Lions Club, along with programs like programs that promote female empowerment like the Girls+ Got Game and Skater Girls+ Nushaiba.

Howard’s work is immersed in Indigenous activism, social justice and reconciliation. A member of the Mowachaht-Muchalaht First Nation and of Nuu-chah-nulth, Kwakwaka’wak and Tlingit ancestry, Howard was instrumental in organizing last year’s Gathering of Canoes, The Drum is Calling Festival, and the Walk for Reconciliation events. Howard is also co-chair of the city’s Urban Indigenous Peoples’ Advisory Committee.

Blondé has devoted more than a decade to the Special Olympians through his involvement with motionball’s Marathon of Sport. The not-for-profit initiative introduces the next generation of donors, volunteers, and sponsors to the Special Olympics movement through integrated sporting and social events.

Organization: Western Institute for the Deaf and Hard of Hearing (WIDHH)

The institute’s 60-year history has focused on inclusion for B.C. residents who are deaf, deafened, deaf-blind, and hard of hearing. More than 12,000 people receive assistance annually through the institute’s efforts to reduce barriers in daily life, in the workforce and education sectors due to communication barriers.

David C. Jones has spent most of his multi-decade career as an entertainer, artist, film-maker and teacher advocating for diversity and inclusion in the arts in Vancouver.

The PACE Society aims to ensure inclusivity for everyone as an organization that provides critical support for sex workers through peer-driven education and support programs following a harm-reduction model. PACE strives to alleviate disproportionate levels of social and health concerns afflicting sex workers.

Fong volunteers in the areas food security and sustainability, gardening, local food and food justice. Her involvement in school programs and with the Collingwood Neighbourhood House amplifies youth voices in the food sustainability movement.

Benson is focused on the impacts of climate change including climate-related financial disclosures and climate change-driven population displacement.  His advocacy, research, writing, public speaking and community involvement encourages those who may not consider themselves to work in the ‘climate field’ to take action.

London Drugs’ What’s the Green Deal Program is a four-pillared approach to encouraging and fostering a more sustainable world by working with customers, staff, vendors, government and communities to create opportunities for recycling, waste reduction and environmentally conscious decision-making. In 2017, more than 1.5 million pounds of post-consumer materials were diverted from landfills as a result of this program.

Healthy City for All Award

Sy is a student activist, volunteer peer tutor. and president of the BC Federation of Canadian Secondary Student. She is the founder of a national organization that matches ambitious students from low-income backgrounds with prestigious internships and has been a driving force in trying to narrow the access gap for youth.

Dr. Carole Christopher’s three decades of advocacy has focused on food security and justice. She helped create the city’s Food Strategy, SPEC (Society Promoting Environmental Conservation) and worked  with Food Secure Canada and other international programs promoting peace and social justice in war-torn parts of the world like Bosnia, Nicaragua and the Soviet Union.

The social innovation program works with local initiatives to support economic and social change in the Downtown Eastside. The LEDLab partners with community organizations to test and scale solutions which create an income stream for Downtown Eastside residents.

Gordon August Sr., or Eagle Eyes, is the hereditary chief of the shíshálh (Sechelt) Nation. Outside of his environmental activism, he’s shared his knowledge and experience of First Nations people, arts and culture for more than 30 years in numerous volunteer roles.