The Canucks need even more from their young sniper in his third season.
Apr 19, 2019 2:38 PM By: Daniel Wagner 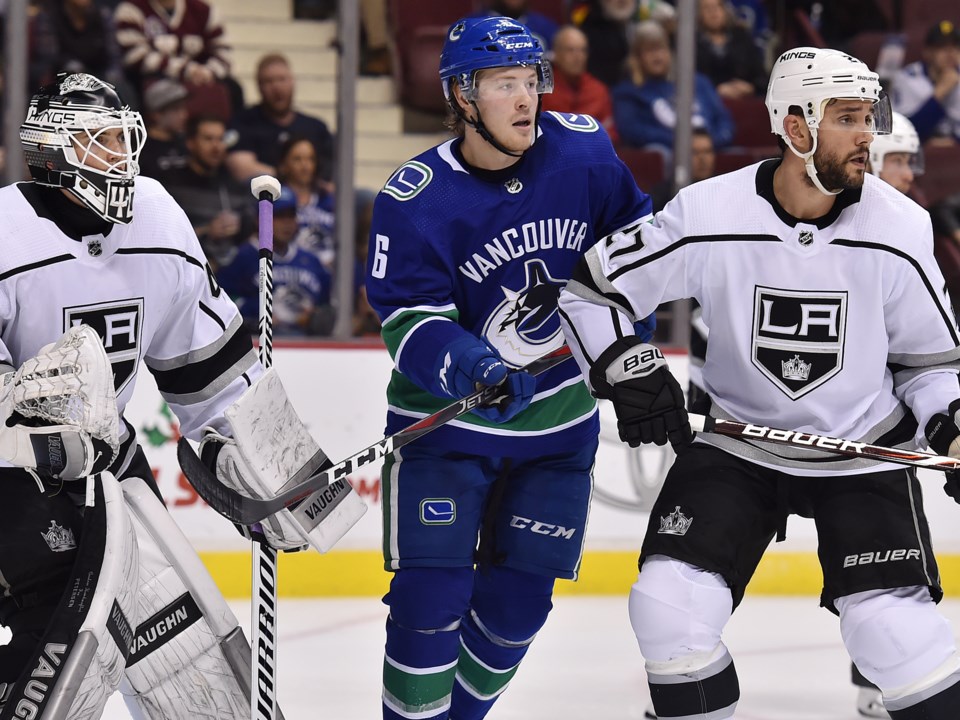 Brock Boeser of the Vancouver Canucks sets up in front of the Los Angeles Kings' net.Dan Toulgoet / Vancouver Courier

Brock Boeser had a strong finish to the 2018-19 season in more ways than one. He led the Canucks in scoring in the back half of the season, including 13 points in his final 16 games. He was regularly playing 20+ minutes per game.

Most importantly, he was healthy.

Boeser’s standout rookie season ended on a sour note when he suffered a brutal back injury in early March. That ended any hope of challenging Mathew Barzal for the Calder Trophy as rookie of the year, but also delayed his offseason training, which made it tougher to hit the ground running in his sophomore season. This year, that’s not an issue.

“It’s a lot different than last year because I couldn’t do anything until about mid-July,” said Boeser. “[I’m] talking with the strength guys, getting a whole program set up to make sure that I’m feeling good and getting my back strong again and my abs and stuff to support the back. It’s exciting.”

Boeser got off to a rocky start in 2018-19, as he was slowed not only by his delayed offseason training, but also by a nagging groin injury that cause him to miss a couple games. While he picked up points, he lacked explosiveness in his skating stride and struggled to find the time and space to release his shot. Just when things seemed to click into place in early November with a four-point night against the Colorado Avalanche, he tweaked his groin injury and was out for 11 games.

“Last summer was tough and obviously it carried into earlier in the season,” said Boeser. “I already had a long offseason and then to miss another 13 games right off the start was tough, but I felt I’ve learned a lot throughout this whole year and I’ve taken steps as a player, and I personally feel I can take a huge step.”

A huge step forward would be welcome for a Canucks team that badly needs more offence. The Canucks finished 26th in the NHL in goals this season. With 29 goals as a rookie and 26 goals this season, Boeser feels he has a lot more to give and compared himself to Bo Horvat.

“Bo took that huge step going into his third year,” he said. “I think I can take that step for next year.”

It’s an interesting comparison, as Horvat didn’t take a massive leap forward offensively in his third year. He had four more goals and 12 more points than his sophomore season, hitting both the 20-goal and 50-point marks, but took more significant steps forward as a complete player. He averaged a minute more per game, and saw significant improvements in his underlying possession statistics, showing the growth in his defensive game.

For Boeser, improving his defensive game and scoring at a higher rate would indeed represent a huge step forward. He has it in him to be a 40-goal scorer, up there with the best snipers in the NHL. If his step forward is matched by Elias Pettersson, who also seems capable of scoring 40 goals, the Canucks will be a much more dangerous team next season.

“He wants to be good,” said head coach Travis Green. “That’s important. I don’t think he’s a kid who’s going to rest on what he’s done and we’re not in a position as a team to think that way. I have a lot of faith Brock’s going to get better as we move on.”

Apart from training, however, there’s one more thing for Boeser to take care of this summer: a new contract. Boeser is a restricted free agent and does not yet have arbitration rights, so has little leverage in negotiations, apart from his excellent on-ice play and the Canucks’ likely desire to get a long-term deal done.

It wouldn’t be surprising to see Boeser’s new deal come in at upwards of $7 million over five or six years, making him the highest paid player on the Canucks. With that kind of pay day, a huge step forward won’t just be the hope, but the expectation.

A tap of the stick to the first round of the NHL playoffs, which always manages to be wildly unpredictable. The biggest upset was the Columbus Blue Jackets sweeping the Presidents’ Trophy-winning Tampa Bay Lightning, but the New York Islanders also swept the powerhouse Pittsburgh Penguins and the lower-ranked teams are ahead in three of the other series.

I’m dropping the gloves with playoff reffing, which is an annual tradition. In an effort to “let the players play,” NHL refs accomplish the opposite, as uncalled hooks, holds, and interference prevent the players from playing to the best of their ability. That’s not to mention the dangerous, injury-inducing plays that somehow escape their notice.

6 - Boeser’s biggest struggles came on the power play. What had been a strength in his rookie year, when he scored 10 power play goals, became an issue when he managed just six power play goals in 2018-19.

33 - Boeser has missed 33 games over his first two seasons; one of the biggest things that could help him take a huge step forward next year is staying healthy all year.