Interiors, done from outside the box

When you walk into a Vancouver restaurant or business and instantly want to stay a while, you might be the answer to Box Interior Design s most important question: Who is this space for? The award-winning Vancouver interior design firm behind Black +
Oct 16, 2012 9:00 PM By: Vancouver Courier Staff 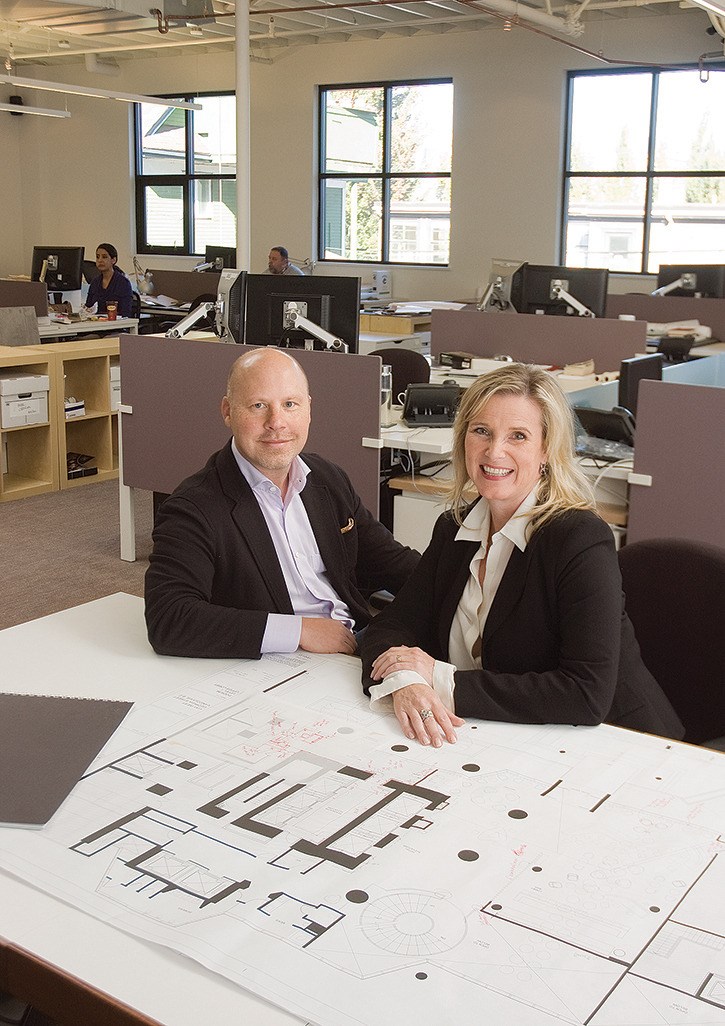 When you walk into a Vancouver restaurant or business and instantly want to stay a while, you might be the answer to Box Interior Designs most important question: Who is this space for?

The award-winning Vancouver interior design firm behind Black + Blue, Coast, Yaletown Brewing Company and MJ Jewelers asks many questions before they transform a space into an inviting oasis of function and form. Much like how a writer creates a backstory for a character, Box Interiors sketches a future customer, using their 20-plus years of experience to pinpoint what the guests will love, what they distinctly wont like, what will inspire them to return and what they might tell their friends.

But good interior design does more than get the bloggers buzzing, it can also increase returns.

Cynthia Penner, principal at Box Interior Design, says the relationship between a successful business and thoughtful design is twofold. First, shabby is not chic. A space should honour a guest with an investment in the experience and attention to detail. People buy with their hearts, says Penner, and if the environment supports the theatre of the purchasing event, loyalty always follows.

But that giant salt meat locker in the centre of Black + Blue (that bathes diners in the soft pink light of backlit Himalayan salt bricks and curing meat) isnt just there to start conversation and make your mouth water. It has to improve work flow and efficiency while creating atmosphere. Thats why any cut of meat you order at Black + Blue has actually been taken from that gorgeous glowing monolith.

Budget and deadlines frame the concept rather than restrict it. Working within exceedingly short time frames they had one week to complete construction on the Gallery Café (Our first and fastest job!) Penner credits their team of suppliers and tradespeople for bringing their visions to life, and helping to forge longstanding relationships, such as with the cafés Murray Jamieson, or Emad Yacoub of the Glowbal Group. And, much like any good writer, even with the tiniest window these designers try to include at least one hook.

Our approach is that if you have a rationale for every decision, the results will hold up over time, explains Penner, who, along with her partner Jay Brooks, just accepted Retail Excellence and Best in Show for MJ Jewelers and Food and Beverage Excellence for Black + Blue at the 2012 Interior Design Institute of BC awards. But you are only allowed a because its cool once per project, she adds with a smile.

Penner and Brooks met in the interior design program in the University of Manitoba. Brooks had already earned his bachelor of fine arts from UVic and Penner was fresh off a year in Sweden. The BC residents (Brooks is from Vancouver, Penner grew up near Kelowna) fell in love and moved to Toronto to pursue their design careers. After stints at Yabu Pushelberg and Cecconi Simone respectively, they returned to BC for a holiday and ended up staying for the past 17 years.

In 2002, they started the business together, landing that Vancouver Art Gallery café contract and confirming that couples can indeed do great work together. We were a little concerned about working together. There are few successful stories and many, many divorces! But it has been terrific.

Penner jokes that every designer is a crow at heart, turning their heads to the shiny things, but she and Brooks each have their specialty. Shes a textile lover; Brooks is all about furniture. Once a year they go to New York to lust over mid 20th-century Italian furniture and lighting. Their own home is simple, with clean whites and greys accented by those life story pieces that seem to find you and follow you along the way. Still, they live by a strict one thing in, one thing out rule.

But are there any rules when it comes to designing a space that is timeless? Only one. Choose the best designer for the job.

Vancouver is a market still learning the value of quality interior design. We are competing less with other firms, than competing against a DIY perspective that is completely bottom-line driven, because they do not really understand all a qualified designer can do for them. Many people still do not know the difference between an architect, a professional interior designer and a decorator, and who would be appropriate for their project.

So the husband and wife team who still use pencils and paper instead of AutoCAD, and hire their designers based largely on the depth of their curiosity, look to another year of stunning spaces. Watch for a sexy restaurant lounge in Yaletown with Mark James and Fraser Boyer and a new look for Celebrities night club. Glowbals evolving Granville Street location will also be getting the Box Interior Design touch. And perhaps most exciting for lovers of iconic Vancouver architecture, they are currently working on the highly anticipated Arthur Erickson tower, a twisting 63-storey structure at 1151 W. Georgia that will be transformed into a luxury hotel and residence by 2015, and is loosely rumoured to be affiliated with the Trump organization.

Big or small, it is so amazing to have [clients] come to us a year or two after working together on a project and offer us the opportunity to work with them again as they grow. To be able to listen to the dreams and visions of our clients and then work to give them more than they imagined is tremendously satisfying. BoxInteriorDesign.com