If approved, complex to include hotel, restaurants and meeting space, 500 slot machines, 24 gaming tables and up to six e-tables
Apr 27, 2018 9:47 AM By: Sandor Gyarmati 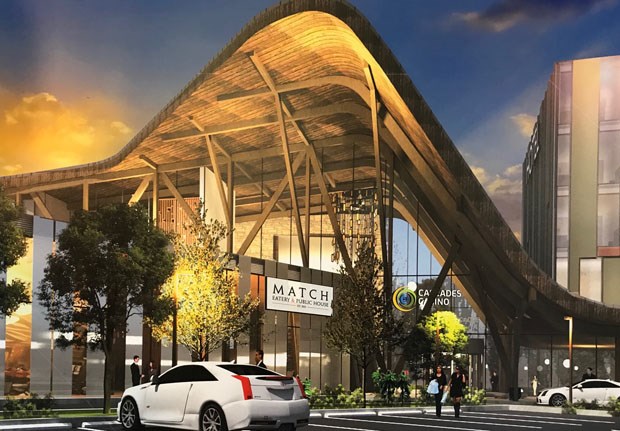 The casino proposed for Ladner, which will be the subject of a public hearing next week, finally has a name.

The branding announcement was made at the nearby Delta Chamber of Commerce office.

Gateway also uses the Cascades brand for its Langley, Kamloops and Penticton casinos. The first Cascades casino in Ontario will begin construction in Chatham-Kent this spring.

The company, which operates 25 casinos across three provinces, notes that central to its success has been the development of proprietary casino and restaurant brands.

The public hearing for the rezoning application takes place on Tuesday, May 1 at 6 p.m. at the Ladner Community Centre.

If the proposal receives approval, the current 49-room hotel would be torn down this summer to make way for the new complex that would be scheduled to open in 2020.

Shato Holdings owner Ron Toigo would continue to own the site and lease it to Gateway.

The complex would include a hotel of 116 to 124 rooms, restaurants and meeting space, while the casino is to have 500 slot machines, 24 gaming tables and up to six e-tables. After six months, a review would take place but any substantial change to the gaming equation would require city approval.

The casino would be considerably smaller than Richmond’s River Rock Casino Resort, which has 1,267 slot machines and 112 table games. Richmond has registered strong opposition to the proposed Delta facility.

The B.C. Lottery Corporation estimates revenue coming to Delta will be at the top end of its initial $1.5 million to $3 million annual projection based on the casino opening with 500 slot machines.

Issues raised by those opposed include traffic, problem gambling and an increase in crime.

A B.C. Lottery Corporation official previously told the Optimist if Delta ends up rejecting the proposal, the lottery corporation would remain committed to expanding south of the Fraser River, suggesting another application could be submitted to Delta or perhaps the Tsawwassen First Nation would be approached.

The Delta casino would be the relocation of the Newton gaming licence.