Is now the right time to trade Chris Tanev?

There’s been a lot of talk about trading Chris Tanev lately, which is understandable.
Daniel Wagner May 5, 2017 2:22 PM
Previous Next
1 / 1
Expand
Previous Next

There’s been a lot of talk about trading Chris Tanev lately, which is understandable. If the Canucks are committed to rebuilding, they need to trade veterans to acquire more prospects and picks, and Tanev is potentially their most valuable trade piece.

The Canucks are at least three years away from being a contender, at which point Tanev will be on the wrong side of 30. It’s fair to question if Tanev has a place in the Canucks rebuild, particularly when you consider the players that have come back in trades for defencemen over the last couple years.

Still, I have to wonder if now is actually the right time to trade Tanev. He’s coming off a tough season where he missed significant time with injuries. Meanwhile, the Canucks gave up a ton of shots and had one of the worst penalty kills in the league. There are plenty of reasons to say that isn’t Tanev’s fault, but do GMs around the league have as high a view of Tanev as they might have last year?

It’s possible that if the Canucks trade Tanev now, they would be trading him when his value is at its lowest.

But what exactly happened this past season for Tanev? He was previously considered the new model for a top-pairing defensive defenceman, but he struggled in 2016-17.

In terms of shot metrics, Tanev had the worst season of his career.


If that data doesn’t highlight how hard he crashed last season, let me put it in a scary-looking chart instead. 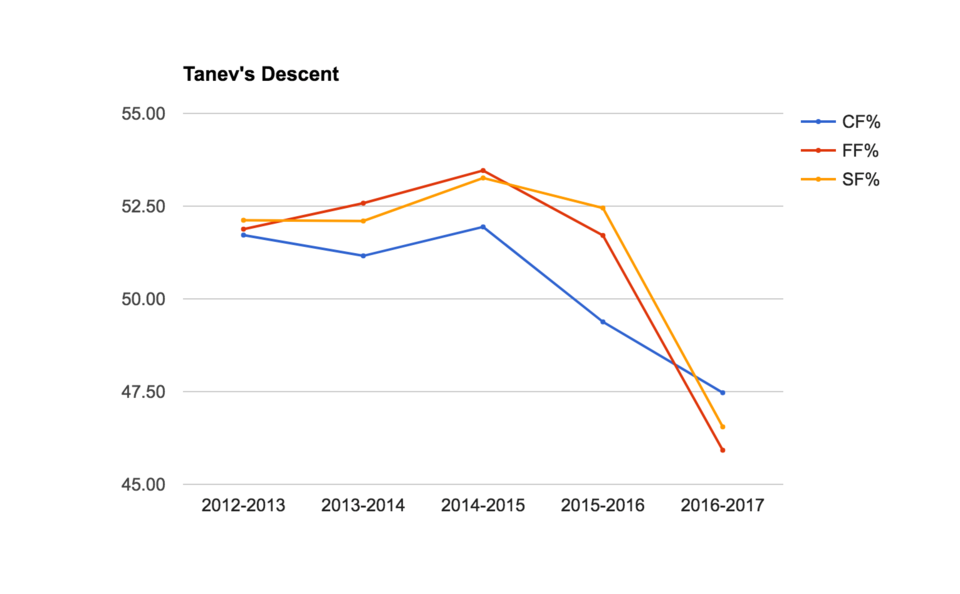 Tanev saw career lows in percentage of on-ice shot attempts (corsi), unblocked shot attempts (fenwick), and shots (uh, shots). This chart would suggest that Tanev is on a downward trajectory and that, perhaps, the Canucks should trade him now before his value plummets even further.

If you look at his shot attempts against per 60 minutes (CA60), you’ll see that his numbers this past season are right in line with his career numbers. Defensively, he was as good as ever.

What seriously suffered were his offensive numbers. When Tanev was on the ice at 5-on-5, the Canucks struggled to get the puck into the offensive zone and keep it there. This would suggest the finger of blame should perhaps be pointed at the forwards, who struggled with offensive zone possession all season, but before we finalize the direction of that pointed finger, let’s look at one more thing.

The above chart shows Tanev’s four most frequent defence partners in 2016-17. His most frequent partner was Luca Sbisa and they were, quite frankly, terrible together.

Tanev and Sbisa posted a CF% of 45.69, which was the second lowest corsi of any Canucks’ defence pairing that played at least 100 5-on-5 minutes together.

Meanwhile, when paired with Alex Edler, Tanev did just fine. They played tough minutes together and posted a CF% above 50%. The Canucks out-shot their opponents when Tanev played with Edler, which makes sense: they were a solid top pairing for the previous two seasons.

So how did Tanev and Sbisa stick together for pretty much the entire season despite their lousy underlying numbers? Why didn't the coaching staff go back to a proven top pairing like Edler and Tanev? There are a couple reasons.

One of the biggest is that the coaching staff clearly wanted Edler to ride shotgun with rookie Troy Stecher. No pairing played more together than Edler and Stecher. It appears they felt that Stecher needed a veteran like Edler to shelter him. They may well have been right: the pairing with the worst CF% on the Canucks? Sbisa and Stecher.

The other reason that Tanev and Sbisa stayed together is that their defensive numbers were somewhat respectable. Where they were badly hit was on the offensive end, which reflects in Tanev’s overall numbers. Were they right to keep them together because of there defensive play? I would say no: it badly hurt them offensively and the long shifts in the defensive zone may have contributed to extra wear and tear on Tanev.

What this suggests, then, is that it wasn’t the forwards fault that the Canucks struggled to get the puck in the offensive zone and keep it there with Tanev on the ice, but that Sbisa was the weak point. Let’s face it, the transition game has never been Sbisa’s strength and he doesn’t contribute much in the offensive zone once the puck is there.

This paints a more optimistic view of Tanev going forward: keep him away from Sbisa, or similar defencemen who can’t transition the puck up ice, and he should be fine. On the other hand, it also suggests his game is a bit more limited than we might have thought, in that he needs a strong partner like Edler to be at his most effective.

What this also suggests is that Tanev may be due for a bounce back season next year, particularly if he's paired with Edler (assuming he doesn't get traded either). The right time to trade Tanev might be at the 2018 trade deadline instead. While Tanev does have a modified no-trade clause that kicks in on July 1st of this year, it isn't too dire, as it simply means that he can submit a list of eight teams to which he won't accept a trade. That leaves 23 other teams with which to negotiate.

Let's be honest: I would hate to see Tanev leave Vancouver. But it still might be the best move the Canucks can make for the future.